September 11, 2009
"I had been praying at daily Mass for Barack Obama's conversion and for the truth about his health care bill to come out," says Jean Heimann, founder of Catholics Against Obamacare, when one day "I felt God calling me to do more."

That "more" entailed forming a coalition of faithful Catholic writers and bloggers who would unite to get the word out  not only about the faults of the current "reform" bill, but also about the Church's abiding and unalterable doctrinal championship of the dignity and worth of every human life, from conception until unprecipitated death.

"As Catholics, we know that prayer is powerful," says Jean, "but prayer combined with fasting can result in miracles."

On September 11, Catholics Against Obamacare is inviting all Catholics, as well as other Christians and people of good will, to pray and fast so that this pernicious attempt to impose socialized medicine on the United States of America will not pass, and that its proponents  including Barack Obama himself  will come to see and respect the truth about human life and its author, almighty God. 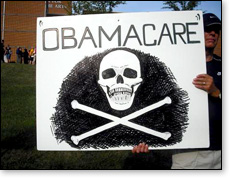 Why should Catholics oppose Obamacare, when so many of our fellow laymen and even those in leadership positions in the Church seem not to? This so-called "reform" attempt "violates our basic values and beliefs as Catholics," Jean insists. "It violates our belief in the inviolability of innocent human life."

As for the contention that abortion "isn't in the bill," Jean states flatly, "It's in there. This administration is fully committed to upholding culture of death values."

As Catholics Against Obamacare member Leticia Velasquez points out, "Congress refused to prohibit it. And under the law, if it is not forbidden, it can be permitted. That's why Congressman Chris Smith calls this bill the 'silent FOCA.'"

Leticia, whose blog is called Causa Nostrae Laetitiae, continues, "We feel this administration is headed in a dangerous direction. That's why we are calling for prayer and fasting on a day that is particularly significant for Americans."

Helen Weir is a teacher and freelance writer currently (like Snoopy's brother, Spike) enjoying the company of the cacti of the American southwest. She belongs to the Militia Immaculatae movement of Total Marian Consecration founded by Saint Maximilian Kolbe, the Hero of Auschwitz.

April 8, 2017
With apologies to Jack alone, Chapter One