Soviet error or desire for freedom? - the fall of the Berlin Wall and the end of the Cold War

November 12, 2009
The celebrations are now over. Leaders from 28 nations  President Obama sent Hillary Clinton  commemorated the fall of the Berlin wall, which initiated the collapse of the Soviet Union. The fall of the wall was the beginning of the end of the Cold War and the dawn of a new freedom for all humanity  or was it? 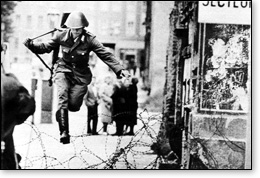 If we understand the fall of the wall and the collapse of the Soviet Union as the product of error rather than as an expression of the human desire for freedom, then the years following the end of the USSR take on a radically different significance.

Twenty years after the destruction of the Berlin wall Russia is in the early stages of a re-sovietization, communist governments are strengthening their hold on their populations, communist guerrilla movements remain determined to force their way to power, and the crimes of the Soviet Union are beginning to fade from memory.

The collapse of Soviet power is not even an embarrassment for today's communists, nor is it an impediment for former Soviet officials in Russia. No trials for Soviet crimes against humanity were held in Russia after the USSR ingloriously evaporated on December 25, 1991. 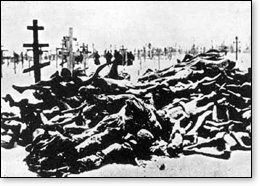 Not long ago, Vladimir Putin, now Prime Minister but then President of the Russian Federation, boldly declared that the end of the USSR was the "worst geopolitical catastrophe of the 20th century."

Putin's dramatic sense of tragic loss certainly shows no fundamental remorse for a government which systematically killed tens of millions of its own people beginning with the first days of the Bolshevik Revolution in 1917.

In a tantalizing comment on the collapse of the Soviet Union, Cuba's Fidel Castro has stated that the demise of the USSR was "naïve and inadvertent."

Castro's remark does not point to a "capitalist victory," but, rather, the incompetence Soviet leadership. During the celebrations commemorating the fall of Berlin the wall, German Chancellor Angela Merkel praised Mikhail Gorbachev, the last Soviet leader, for not interfering in the popular uprising which brought down the Berlin wall, and later led to the undermining of Soviet authority throughout Eastern Europe.

While Merkel was right about Gorbachev's lack of action, but It would appear that inadequacy rather than virtue accounts for the end of what U.S. President Ronald Reagan called the "evil empire." 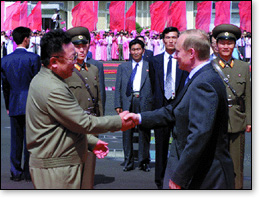 Moscow's deep cover espionage against the U.S. continued without any difficulty, China's tremendous military build-up was possible in its early stages only with Russian assistance, and every nation hostile to the U.S., including North Korea and the Islamic Republic of Iran, found a support in Moscow.

The years following the collapse of the Soviet Union, the increasing sovietization of the "new" Russia and its tangle of anti-American allies  all but ignored in the general media  is examined with extensive notation in Lies, Terror, and the Rise of the Neo-Communist Empire: Origins and Direction, available at this website or at various online book sellers  locate by title.