December 23, 2009
Construction of a Russian missile submarine carrying the name of Saint Nicholas, a revered religious figure in both Western and Eastern Christianity  the real person behind Santa Claus  will begin in early 2010 . Citing an anonymous source, the online version of the Russian newspaper Rossiiskaya Gazeta stated that naming the nuclear submarine after Saint Nicholas "speaks of the promotion of religious thinking by the Russian admirals." 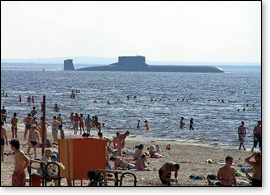 Exactly how "religious thinking" is advanced by attaching a saint's name to a submarine designed to carry intercontinental ballistic missiles was not explained in the article.

The Saint Nicholas would be the fourth and latest of the Borei (North Wind) class of submarines, known to NATO as Dolgorukiy, which is meant to replace the ageing Delta III and Typhoon submarines now in service.

The first of the Borei class to go into service, the Yuri Dolgoruky, is undergoing sea trials. The Alexander Nevsky and Vladimir Monomakh are presently under construction. All three vessels are named after Russian heroes of the eleventh to the thirteenth centuries.

The Yuri Dolgoruky is known to be 580 feet length, 42 feet in diameter, will carry 16 intercontinental ballistic missiles, with a crew of 107 officers and men. The Dolhoruky can travel at about 25 knots.

Moscow claims that the Borei class has design characteristics enabling the submarines to cruise silently and is less detectable to sonar than any other submarine currently in service.

The main target of these missiles carried in the Russian submarines is the United States. 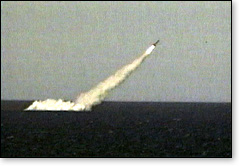 The Saint Nicholas may be slated to carry not the troubled Bulava, but another, unspecified, intercontinental ballistic missile, Rossiiskaya Gazeta report speculated. Other Russian news reports seem to indicate that the Russian navy will continue to support the Bulava.

The names of the four Borei class submarines demonstrates the determination by the Moscow elite to link the present Russian government with Russia's traditional past. The use of the name of Saint Nicholas is another attempt to invoke religious fervor as a support for the Moscow political elite and the so-called "managed democracy" which controls Russia.

Although not loathe to using religion to gain political for the current regime, the Moscow elite is much more at home with the secular, oppressive tradition of Soviet Communism. Vladimir Putin, currently Prime Minister, has described the fall of the Soviet Union, branded as the "evil empire" by President Ronald Reagan, as the "worst catastrophe of the 20th century."

Another indication of the Moscow elites reverie for things Soviet, on December 19th Russia celebrates "Cheka Day," a commemoration of the founding of the Bolshevik sercret police, know as the Cheka. "Cheka Day" also is a tribute to all subsequent intelligence officers, both Soviet and Russian, secret police or spies operating in foreign nations.

The term Checka was the generally used name for the All-Russian Commission to Fight Counter-Revolution and Sabotage. The Cheka was responsible for the death of millions and the imprisonment of millions more Russian citizens.

Soviet, and later Russian, intelligence services underwent several organizational and name changes. The best known of these organizations in the West was the infamous KGB.

Whenever the new Borei class submarine is launched, the world will witness "Saint Nicholas" in the service of the Moscow elite and the "Chekist" tradition of oppression. 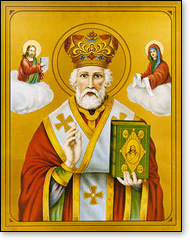 The real St. Nicholas, however, sees God, and knows well the Divine Son, Jesus Christ, whose birth we celebrate not with a day, but with a Season  one that lasts until Candlemas Day, February second! The ultimate fulfillment of Christmas comes during the Spring, in the Cross of Good Friday and the Resurrection of Easter. St. Nicholas points to the love and unlimited power of God, not to megatons of death.

St. Nicholas pray for us at this Holy Season.

ASK YOURSELF: COULD ISLAMIC FUNDAMENTALIST TERROR EXIST WITHOUT HELP FROM THE MOSCOW ELITE? THINK IRAN, SYRIA, ETC. READ: LIES, TERROR, AND THE RISE OF THE NEO-COMMUNIST EMPIRE: ORIGINS AND DIRECTION.

TO ORDER FROM AMAZON, CLICK ONTO: LIES, TERROR, AND THE RISE OF THE NEO-COMMUNIST EMPIRE: ORIGINS AND DIRECTION