Lies and the preferred terrorist

May 12, 2010
Not all terrorists are equal. Some act alone or in connection with a small band of murderers, as did Faisal Shahzad, the would-be New York Times Square bomber.

There is, however, another kind of terrorist who aims to destroy more than human lives and property. This brand of terror is intent on annihilating entire nations.

And it has the support of some of the world's leading nations with access to skilled espionage networks and sophisticated weaponry  including possibly nuclear weapons.

A Cover for Terror

Russian Prime Minister Vladimir Putin gave the world a look at the dynamics involved in supporting nation-killing terror. While the Russian government strikes out at terrorist groups when its interests are endangered, Moscow is also providing vital material assistance and cover to anti-American terrorism.

Moscow is an essential part of a terror network stretching from the jungles of Colombia through the Latin America and into the heart of the United States. 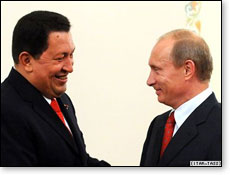 Putin gave important cover to this Latin branch of the international terror network during his early April visit to Venezuela and its Marxist president, Hugo Chavez.

Putin firmly stated that Russian intelligence has "no indication" that the Chavez regime "has ties to international terror," according to a report in Venezuela's El Universal.

"We have a very good data bank on terrorism and those supporting terror," said Putin, "and we have no information confirming Venezuelan support for terror."

Putin also claimed that, if the Chavez regime was connected with terror, "I would not be here." 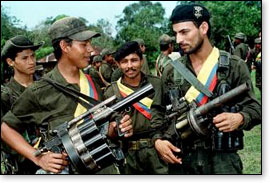 This is hardly the case. Not only is Chavez allied with the terror-supporting and nuclear-tipped Islamic Republic of Iran, but his regime is also close to a powerful Latin American narco-terror army which also has operatives in the U.S.

For years reports have tied the Chavez regime to the Marxist FARC, the Spanish acronym for the Revolutionary Armed Forces of Colombia, a group that has fought a civil war in Colombia for over four decades and which has cost many tens of thousands of lives. Kidnapping, bombings, ambushes of police and military personnel are some of the tactics the FARC uses.

The FARC is also a major player in the illegal drug trade, and is allied with Al-Qaida in the export of narcotics from Peru to West Africa.

Much of the FARC's drug trade is directed at the United States, with representatives active in major U.S. cities.

The FARC is also connected to the training of Mexican drug cartel fighters who are now engaged in open revolt against the Mexican government.

The FARC has always acknowledged their loyalty to Chavez and at one time vowed to fight for the Chavez regime against any attack from the United States.

In a recent statement, General Douglas Fraser, head of the Miami-based U.S. Southern Command, expressed his belief that the FARC receives "financial support" which is "enabling their capacity from a logistics standpoint."

Press reports of Frasers' comments also point out that earlier Fraser had told members of Congress that he had no evidence of links between Venezuela and the FARC.

Fraser has also called for greater intelligence efforts in Latin America to document the exact relationship that exists not only between the Chavez regime and the FARC, but also the expanding role Iran is playing in Latin America.

Support for Fraser's link between the Chavez regime and the FARC has emerged in the form of a former FARC guerrilla who not only connects Chavez with the Marxist narco-terror army, but states that Chavez conducted negotiations with the FARC even before he took office as Venezuelan president in February 1999.

A one-time FARC guerrilla, referred to as "Morales," recently stated that before his election as president, Chavez met with a top FARC official, Timoleon Jimenez, known as "Timochenko," several times in 1998 in Colombia. 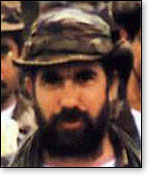 "Timochenko," whose given name is Rodrigo Londono-Echevenry, currently is wanted by the United States for drug money laundering charges, and the U.S. is offering a five million dollar reward for his capture.

Responsible for the FARC's production and distribution of cocaine, "Timochenko" has reportedly ordered the shooting down of anti-drug surveillance aircraft, the kidnapping of U.S. citizens, and the execution of farmers selling drug crops to other than FARC distributors.

At one of their meetings, "Timochenko" gave Chavez the revolutionary name of "Comrade Pedro," according to Morales.

Chavez also "supplied military assistance" to the FARC before he took office as president, according to Morales.

Morales' account fits into previous accusations of a drug-money link between the Chavez regime and the FARC. Using illicit drugs to fight a Marxist revolution is not a new idea. Mao used narcotic sales to finance his guerrilla movement in China after funds from the Soviet Union dried up following the Nazi invasion in June 1941.

America  and God Almighty  are the Main Enemies

The ultimate target of the arms is the United States. The fighting now may be taking place in the jungles of Colombia, or Peru, or in the streets of Mexico  but make no mistake  the profits from the production and sale of illicit drugs goes in large measure to finance the ongoing struggle against the United States.

Revolutionary groups, including the FARC, are already in the U.S. They are already, when possible, speaking quietly to disaffected American youth. The FARC is especially ready to sell both drugs and revolution within the borders of the U.S.

Already U.S. city police are finding it necessary to equip themselves with military assault weapons to counter the fire power of street gangs. The "revolution" has already started.

The relentless propaganda of the Left which lies about the opportunities in America, which paints the United States as a racist nation, which calls for an all-powerful central government, prepares the way for terror and violent revolution.

The lies of the Left should be obvious. Millions come to the United States for just those opportunities that the Left says do not exist.

The people of the United States have always recognized that rights necessarily come from God, from a source beyond government.

The Left despises this concept, because it places limits on their authoritarianism. Leftist regimes always want complete control of the populace, and attempt to either use God for their own purposes or annihilate Him completely from the public's mind.

No individual or ideology, however, can change this basic truth: human rights are absolute only because God is absolute. Politically, philosophically, or theologically, there is no other answer to where human rights originate. What the government does not give, it cannot take away.

Our rights as human beings  which includes the right to live one's life in safety  come from God. No Leftist leader can change that reality.