A note to defense budget cutters: America is at war, and not just with fundamentalist Islam

May 19, 2011
In the debate over how spending cuts will be inflicted upon the U.S. military, little is heard about the China threat, less about Russia, and nothing about the alliance between the two — a "strategic partnership" for a "new world order" that goes back to 1997 and the era of Boris Yeltsin and Jiang Zemin. To ignore this global reality threatens the security and very survival of the United States. 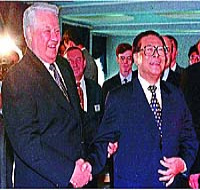 China is already in a cyber war with the United States, constantly probing and attacking sensitive national security points, and Russia is both beefing up its own armed forces as well as aiding profoundly anti-American regimes from Iran to Venezuela and Cuba.

At the same time America is debating how much we can afford for our continued existence as a nation. 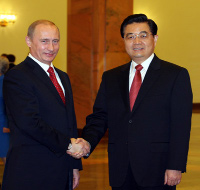 In the debate over how much should be spent on national defense, opinion is not merely divided between the Right and Left. Conservatives themselves are split on the issue.

A recent exchange between two major figures in American conservatism in large part demonstrates the divide among those on the Right concerning money spent on defense. As important as what was said is what was not said, especially concerning the Russian-Chinese alliance.

May 3, 2011 address at the American Enterprise Institute. 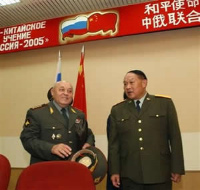 While both men mentioned China as a possible consideration in defense spending, neither addressed the increasingly dangerous pact between Moscow and Beijing.

No major conservative figure, including talk show hosts, speaks to the ever stronger ties between Russia and China, as well as the efforts these two nations exert in undermining the United States around the world. All discussion revolves around either domestic politics, or the threat of fundamentalist Islam.

This is a serious disservice to the American people.

The truth is that Communist China and the "new" Russia have much in common, both in their international activities and their methods of ruling at home.

Moscow and Beijing are not as far apart in the methods used by their respective elites as many experts would imagine. While everyone acknowledges that China is dominated by that nation's Communist Party, most authorities see Russia as a struggling democracy. While the assessment of China as a Communist state is correct, Russia is, in reality, a totalitarian state masquerading as a democratic state.

Moscow's ruling elite allow little opposition. The media, with rare exceptions, is under the thumb of the government. Individual reformers and political activists truly opposed to the Moscow elite are regularly beaten or even assassinated.

Within the Russian legislature, the leading political party is United Russia, the party of Vladimr Putin and Dmitry Medvedev. Opposition parties (including the Communist Party and its allies) support United Russia on all important issues. There is no real debate, no real exchange of opposing ideas.

Russian Prime Minister Vladimir Putin, the past and possibly future President of Russia, wants to go a step further. Putin has called for what he terms a "united front," a de facto union of all major political parties to confront that nation's economic problems. The result of Putin's "united front" would be in reality another giant step into the darkness of the one-party state. 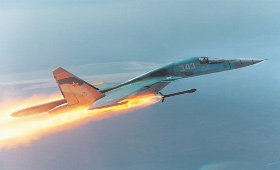 Like China, the Russian political elite are also engaged in a multi-billion dollar military buildup which is scheduled to continue for at least a decade. The Russian armed forces will be receiving new tactical and ballistic missiles, with the production of ballistic missiles systems doubling by 2013. New multiple launch missile systems, self-propelled guns, anti-tank missiles, new anti-aircraft missiles, are scheduled to deploy in the Russian armed forces beginning this year, as well as improved submarines, tanks, and jet fighters.

Russian technology, which includes military technology, will get a substantial boost from the development of Russia's own "Silicon Valley." The Moscow suburb of Skolkovo is the site for a new technology and research center, which will benefit greatly from the participation of American high tech firms.

The target for Russia's ballistic missiles and an increasingly sophisticated military is not some terror group or its neighbor and ally, China. Of all the nations in the world, only America is able to evoke in the Russian elite the impetus to engage in a major arms buildup.

Despite all the hope and optimism which followed the Soviet collapse, America remains Moscow's main opponent, because within the Russian elite is the desire to reestablish a new, more formidable Communist state. It is no accident that former Soviet dictator and mass murder Josef Stalin is an increasingly popular figure in the "new" Russia, and it was no whim that led Putin to sing old KGB fight songs with the Russian intelligence officers who were arrested in the United States, June 2010.

One of those officers, an individual known in the West as "Anna Chapman," was appointed a leader in the pro-Kremlin youth group, Molodaya Gvardiya (Young Guard), a group known for its anti-U.S. rhetoric and assaults on those opposing the Kremlin.

Russia is providing vital military aid China, a fact which Beijing has gratefully acknowledged. Moscow's assistance to China is not a new development, but a partnership which has its roots in the 1990s, shortly after the collapse of the Soviet Union. The "new" Russia is, in large part, responsible for the current threat that China poses to its neighbors, and will eventually present to the United States in the Pacific.

The Russia-China alliance is even planning to carry out joint operations in outer space, with a lunar colony under consideration, as well as exploration of Mars.

Both nations are also engaged in espionage activities against the United States at Cold War levels. While the arrest of 10 Russian intelligence officers received a great deal of press coverage, little attention has been paid to the 57 individuals (at recent count) who have been apprehended since 2008 on charges of working for China.

While Russia and China are increasing their military capabilities, we are threatening to shrink ours. As Moscow and Beijing look to the stars, we will soon be dependent on Russia for merely getting to the international space station.

And, at the same time we are under severe attack from Chinese and Soviet operatives, we are ready to decrease our already meager outlay for counterintelligence services.

If we are to survive, this state of affairs must quickly change.