October 9, 2012
Russian Foreign Minister Sergei Lavrov declared that the Obama administration's "Reset" in relations with Russia "cannot last forever," and must be followed by a closer relationship, according to a Reuters news report. Lavrov, however, is willing to wait until the outcome of the elections in the U.S. for more specifics.

President Barack Obama has already assured Russian Prime Minister Dmitry Medvedev that he would have "more flexibility" in his dealings with Russia after the U.S. presidential elections.

The kind of role the U.S. would have in Moscow's world view was made apparent by Lavrov's boss, Russian president Vladimir Putin, who clearly favors the rule of a heavy handed Communist elite.

Two days before Lavrov unilaterally placed limitations on the Obama administration's "reset," Putin had relayed his enthusiastic congratulations to Chinese president Hu Jintao on the 63rd anniversary of the 1949 Communist takeover of the China mainland. After that victory, the U.S.-supported Nationalist government of Chinag Kai-Shek took refuge on the island of Taiwan. The Russian language online version of RIA Novosti carried Putin's remarks

Putin has referred to the collapse of the Soviet Union as the "greatest geo-political catastrophe of the 20th century," and now applauds the founding of the Peoples Republic of China, which has killed tens of millions of its own citizens since its founding.

Today, Beijing does not kill to the same degree, but it still tightly controls its population. The secret police is an ever-present reality in the Peoples Republic.

In his communication with Hu, Putin praised Communist China for its "significant contribution to solving the most pressing problems" of today's world, and he praised the mutual cooperation between Russia and China. One area of cooperation, it may be noted, is propping up the bloody Syrian regime of Bashar al-Assad.

Putin stated that he wants even more intense ties with Communist China.

How close Moscow and Beijing can become is anyone's guess, but already, in 1997, Russia's Boris Yeltsin and Communist China's Jiang Zemin together declared the founding of a New World Order intended to replace U.S. world influence. 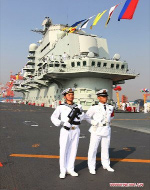 Russia and China are at the present time working to bring about the vision of Yeltsin and Jiang's New World Order, most notably an intense military buildup directed against the United States. Included in their plans are the construction of aircraft carrier task forces, which are intended to challenge the United States Navy in the Pacific.

Putin has stated that Russia and China stand ready to ensure the "stability" of the Asia Pacific region.

The Peoples Republic of China has already warned U.S. Secretary of State Hillary Clinton that the United States must keep out of the dispute over several island groups in the South China Sea.

Beijing has gone so far as to claim the entire South China Sea as its own, putting Communist China in control of one of the world's most important commercial shipping lanes. An American pull back from the region would be a fatal blow to the independence of Japan, Philippines, and the free island of Taiwan (Republic of China on Taiwan), all close American allies.

Moscow and Beijing are also taking their New World Order into space. There are serious plans for a Russian-Chinese base on the moon.

The power of this Moscow-Beijing axis is not just a future threat, but its effects are being felt now. Every day lives are lost to the brutal oppression practiced by the dictators which the ruling elites in Russia and China support, from North Korea to Cuba. The Islamic Republic of Iran receives technical assistance from China in how to most effectively subjugate its population, and Russia is making Iran into a nuclear state.

Spying by Moscow and Beijing against the U.S. and its allies is at Cold War levels. The FBI has just broken another Russian spy ring, this one operated out of Houston, Texas, and was run by a naturalized U.S. citizen. The case involves U.S. microelectronic technology transferred to Russia for the purpose of assisting the modernization of the Russian military. The Chinese are as active. A House panel has recently warned U.S. companies not to do business with China's two top technology firms over cyber security concerns

Unfortunately — and ominously for the American people — the mass media addresses little of this.

In view of Moscow's past and present actions, Lavrov's demand that the Obama administration's "Reset" be expanded is absurd.

The "Reset" itself is an abject and dangerous failure. U.S. national security demands a realistic look at the world around us, beyond what so-called mainstream media will provide. Our survival as an independent nation and a free people demand it.

We will do our part to keep you informed.