April 21, 2014
Russia's ability to exert its will in Crimea and threaten eastern Ukraine did not arise accidentally, but by design. Russia's successful use of threats, infiltration by special operations units, and outright invasion would have been impossible without the collapse of the Soviet Union in 1991, which enabled Moscow to be the beneficiary of subsequent large scale financing and technical assistance from the West. 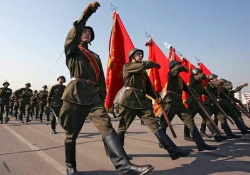 Russian President Vladimir Putin has denied that there is an alliance with the Peoples Republic of China, and a major Moscow-based think tank dismisses those who express their concerns about a Moscow-Beijing partnership as "Internet hamsters."

Deeds, however, are confounding denials. 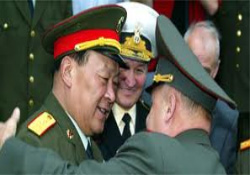 The flow of Russian gas and oil to China is about to increase substantially, Russian-Chinese military and technical cooperation continues unabated, and there are even good relations between the Communist parties of both nations. The reality is that we are in the early phase of a Moscow-Beijing axis, a dangerous reality which politicians and pundits refuse to recognize, just as they refused to see a Russian threat until the invasion of Ukraine.

Europe is vulnerable to Russian aggression because it has neglected its military and has willingly grown dependent upon Russian gas and oil. Many of Europe's most powerful financial institutions are also heavily invested in the Russian economy.

The United States is in a somewhat better position, but not by much. Years of military cut backs, a "peace dividend" which followed the collapse of the USSR, and a turn by several U.S. presidents away from readiness against major power aggression to small anti-terror operations has taken a serious toll on American preparedness. The horrendous weakness of President Barack Obama in the face of Russian aggression fits neatly within the scenario of America's self-imposed superpower decline.

The overall decline of Western European and American readiness can be attributed to one major factor: the fall of the Soviet Union and absolute blindness to what followed.

Strategic Importance of the "Fall of Communism"

As the Soviet flag was lowered for the last time, most of the world rejoiced at the end of the "Evil Empire" and the "Fall of Communism." The Soviet Union was no more; freedom had come to the long suffering Russian people, some even saw the hand of God in the defeat of atheistic Communism. China's brand of Communism would soon collapse as did its Russian counterpart, at least so said the major pundits of the era. 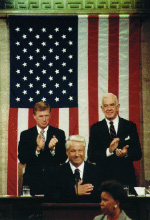 The first president of the "new" Russia, Boris Yeltsin, declared to a joint session of the U.S. Congress in 1992 that the "idol of Communism" was dead, never to return. The once mighty Soviet armed forces disappeared, and was replaced with a fast-decaying Russian military. Nuclear submarines rusted riding at anchor. The Russian army became an ill-equipped shadow of the Soviet war machine.

At the same time the Russian military seemed laughable, Western bankers, venture capitalists, and investors lined up to pour millions into the Russian economy. Western Europe gave itself over to Russian energy suppliers as an alternative to Middle Eastern sources.

But something was going very wrong in the "new" Russia.

So-called "Wild West capitalism" (an insult to both capitalism and the American West) resulted in vast fortunes being made at the expense of the public murder of rivals. As a few made vast personal fortunes, the average Russian fought merely to survive. The Soviet-era economic safety net had disappeared with nothing to take its place.

Death was not only a solution to business rivalries, but also stalked journalists critical of the government and some political opponents. The promise of societal "openness" faded into an intimidated silence. As a new fear began to grip Russia, most major economic enterprises fell into the hands of those with ties to present or former Soviet intelligence agencies.

The warnings from dissidents such as Elena Bonner that the "KGB" ruled Russia fell on deaf ears as the smart money continued its flow into Russia.

Europe invested more heavily in Russia than the United States, but the U.S. was, and is, involved in the transfer of technological expertise to Russia. U.S. corporations are particularly committed to assisting Russia in its attempt to establish its own Silicon Valley. The Skolkovo facility outside of Moscow has as some of its U.S. partners Microsoft, Boeing, Cisco, Intel, Dow Chemical, and IBM.

It is doubtful that recently imposed U.S./Euro sanctions will seriously affect the participation by the U.S., or other nations, in Skolkovo.

U.S. pundits and politicians not only ignored the warnings of dissidents like Bonner, but also disregarded Russia's expensive rearmament program, new weapon development, the continued use of Red Army emblems and insignias, and the establishment of military training camps for promising Russian youth. Putin made no secret of his high regard for the old USSR, calling its demise a "geopolitical catastrophe." Putin has given the soldiers and spies of the old Soviet Union medals and honors. The Russian government has cultivated a general reverie for all things Soviet.

Even mass murderer Josef Stalin got something of a whitewash. The general feeling about Stalin now coming from Moscow is that everyone makes mistakes.

The old Soviet Union has achieved an almost folklore status of honor and respect. No longer is it assumed that the USSR floundered as a result of its own crimes and errors. Recently, a group of politicians in the Duma (the lower house of the Russian legislature) began the process of bringing criminal charges against whomever was found to have caused the collapse of the USSR.

Today we are facing a far different reality than that promised by Yeltsin as he spoke to he U.S. Congress. Russian spying against the U.S. and the West is at Cold War levels. Moscow is allied with every anti-American regime from North Korea to Iran. Moscow continues to fund Venezuela's neo-Marxist state, just as its aid to Communist Cuba has continued unabated since the collapse of the USSR.

The "idol of Communism" of which Yeltsin spoke, and which he said would never return, has reappeared. The Communist Party of the Russian Federation (CPRU) is the second largest political group in Russia, with predictions among some Russian experts that it will become the majority party as it combines with smaller like-minded parties. One reflection of Communist strength is the victory of the Communist party mayoral candidate in Russia's third largest city, Novosibirsk, in Russian Asia.

Because of Russia's aggression against Ukraine, many in America are now aware of a Russian threat, and some even recognize Putin's drive for a new version of the old "Evil Empire." There still is, unfortunately, difficulty in understanding that Moscow does not stand alone, but has a powerful ally in Communist China, a growing danger to America's allies and the U.S. fleet in the Pacific.

It's time to face these threats clearly. It is long past time to recognize that the Moscow elite are not our friends, and that, in fact, they are attempting to establish some form of overt Communist rule in Russia. We are still this elite's "main enemy."

Our representatives should review U.S. investment and technical expertise that is flowing to Russia, and cut our financial dependence on China as well. We should not be tied to aggressive, anti-democratic regimes, or we will face Europe's plight.

At home we must also be strong. A first class military is an absolute necessity, but so is a solid, clear thinking homeland. The training of America's youth is an absolute priority. The Left's propaganda and its "political correctness" can no longer be allowed to dominate American education. Reality must displace the Left's Socialist prejudices. Funding is the key. The public must demand an accurate presentation of U.S. society, history, and economic system in America's classrooms at all levels, or lose financial support. This pressure can be applied at federal and state levels, and by private donors.

The threat to human freedom is now serious and could become extremely grave, but we have risen to such challenges before. It is time again to come to the defense of God-given human freedom.

After all, we have on our coins, "In God We Trust."