Putin and his wilderness of mirrors

December 16, 2015
During the Cold War, the controversial CIA counterintelligence expert James Angleton compared dealing with the Soviet Union and its spies to finding oneself in a "wilderness of mirrors." In Syria, we are getting a taste of what Angleton experienced decades ago as we consider the statements and actions of the Russian government led by ex"-KGB man Vladimir Putin. 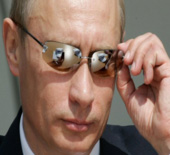 A spokeswoman for the Russian Foreign Ministry recent ly stated that the West was fighting a tepid war against ISIS, and the Western coalition is working for an "ideological" and "politicized" outcome. Russian Foreign Minister Sergei Lavrov had also declared that the West is attempting to use the divisions within Islam to destabilize Syria, while Moscow "is convinced" that overcoming those divisions can bring about "stable and long-lasting peace" to Islam.

The glaring truth is that Moscow has brought in troops from Shi'ite Iran to fight against Sunni Muslims hostile to the secular, Socialist regime of Basher al-Assad, who is nominally Shi'ite. It is unclear how this will bridge the fundamental chasm between Sunni and Shi'ia.

It is true, however, that the U.S.-led response has been generally weak. Fewer sorties have been flown against ISIS than during the 1999 air campaign against Serbia, and seventy-five percent of U.S. aircraft sent on bombing missions have returned to base without dropping their bombs. Russia's actions in Syria, at least initially, have been brutally effective, attacking oil facilities, transport, and "terrorist" concentrations, but with little apparent concern for civilian casualties,

Russia's actions are also skillfully duplicitous. Russian attacks are directed as often – or more so – against anti-Assad forces supported by the West as against ISIS. This is no accident.

Putin and his puppet, Syrian president Basher al-Assad, regard all anti-Assad groups as "terrorists." The U.S. and its Western allies have long wanted to overthrow Assad, and have supported so-called "moderate" anti-Assad factions. This desire to be rid of Assad is the "ideological" and "politicized" result of which Moscow is bitterly complaining.

Russia has had a long-time alliance with the Assad family extending back to Basher's father, Hafez. who seized power in 1970. Basher has continued the alliance with Moscow. Despite the Assad family loyalty, however, Putin's main concern is the preservation of Russia's naval base at Tartus. Putin has plans to turn the small repair facility into a major naval base as part of his vision of Russia again becoming a global military power. The only way Russia can maintain its presence in Tartus is by propping up the besieged Assad regime. The destruction of ISIS is secondary, although the Islamic State earned Moscow's wrath when it, as it claimed, bombed out the sky a Russian airliner flying over the Sinai peninsula.

Putin's support of Assad is, however, much more sophisticated than merely bring in some military hardware. Putin is in the process of turning the war against ISIS into a war to support Assad. The key concept is this: all anti-Assad groups are "terrorists," and no government in the anti-ISIS coalition can support any "terrorist" group. In other words, Western nations must stop all aid to all anti-Assad rebel groups. For the West to support an anti-Assad armed faction while attacking ISIS would be a "double standard."

As Putin declared In this year's annual presidential address to the Russian Federal Assembly, not only should "every civilized nation" contribute to the "crushing defeat" of ISIS, but there must be "no double standard, no contact with any terrorist group,"...and no attempt "to use" such a group for some nation's purposes.

That is to say, the intention of overthrowing Assad.

The "moderate Muslim" rebel groups fighting against Assad do pose a problem for the West. Just how "moderate" is "moderate"? Do they share the ISIS proclivity for slaughtering non-Muslims? How do we know?

Replacing the secular, Socialist butcher Assad with an equally bloody Muslim regime makes no sense, as has been demonstrated in Libya and, briefly, in Egypt.

The question of whom we can legitimately support is open.

What is certain is that Putin has brought his military into Syria not so much to fight ISIS as to end the threat to the Assad regime.

It may be noted at this point, that Putin, whom many consider to be a defender of Christianity, has done nothing to help the thousands of Christians who have fled death at the hands of ISIS and other Islamic militant groups.

Syria is a morass of political, religious, and tribal hatreds, into which Putin has inserted Russian armed forces. In support of those armed forces Putin has also mobilized a sophisticated array of lies, half truths, and the manipulation of his "allies," recreating a "wilderness of mirrors" which would be familiar to Angleton.

We will see these tactics again, and, undoubtedly, with much more at stake.