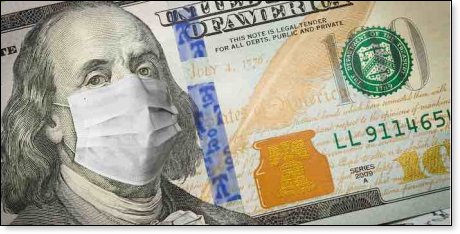 President Trump is right that we’re at war with an invisible enemy. But that enemy is most emphatically not a virus. He has been lured into fighting the wrong war.

It seems the President’s advisors are insisting he focus on Covid-19—the red herring—rather than on the true invisible enemy: the America-hating Left and the elite globalist cabal that’s been trying to take down America for years to implement their One World Government “utopia.” Note also that this New World Order plan looks a lot like worldwide Communism, complete with high-tech Big Brother surveillance. It is antithetical to everything America stands for, and all the liberty Americans enjoy.

So let’s take a step back and look at the big picture instead of focusing on the spiky ball with the red fuzzy wuzzies sticking out all around it—which is tantamount to watching cartoons while America is burning.

In a 1984 interview, Russian defector Yuri Bezmenov, who had worked for Soviet intelligence and propaganda agencies, revealed that Communism had neither died nor disappeared, and still fully intended to take over the West. Bezmenov went on to explain the psychological warfare methods used by the KGB for the gradual subversion of the political and economic systems of the United States.

He listed four distinct stages in the propaganda war to take over a country and make it a Communist nation, as follows:

Stage 1: “Demoralization” in which Judeo-Christian values and morality are systematically attacked, and people’s morals corrupted in every way possible.

Does anyone think this hasn’t happened in America?

Stage 2: “Destabilization” in which the country’s economy, military, and foreign relations are undermined.

Remember Obama’s apology tour where he bowed to radical Islamic leaders? Remember Obamacare? Remember how he dismantled our military? Or how he inflamed racial tensions in our nation? Mission accomplished.

Normalization: This is the New World Order with its One World Government

Stage 3: “Crisis” and this is where we are now. Bezmenov says it takes only up to 6 weeks to bring a country to crisis, after which one can radically alter its structure, economy, and government.

Stage 4: “Normalization.” This is the end game. This is the goal. This is the New World Order with its One World Government. Call it Worldwide Communism, Technocracy, Global Feudalism, or what you will, it is slavery and misery—for all but the psychopathic elites who engineered it.

What is to be feared and resisted at all costs is this “normalization.”

Alarmingly, we’re already hearing the telltale phrase “new normal” bandied about by the talking heads in the corporate media. In fact, I’ve been receiving emails from corporations I’ve dealt with in the past: banks, airlines, etc., announcing the “new normal.” United Airlines began its email this way, “As we all adjust to this new normal….” This “adjusting” should frighten us far more than an eensy weensy virus from which 99% of people easily recover. And ask yourself why a bizarre, overhyped, presumably unique occurrence of a flu epidemic that is sure to end – as all flu epidemics/pandemics always have – should suddenly, drastically, and permanently change the way we live?

But let me address the question of how we got here. Wasn’t this pandemic an accident that originated in a Chinese wet market that sold bats? Well, no. Consider the timing, in the spring of our election year when Trump was clearly unstoppable and producing prosperity that was lifting all boats. Consider how it fulfills so many ambitions of the Democrats, Deep State, and assorted globalists. Too perfect, too overblown, too scripted to have been accidental. And since the perpetrator is invisible, I think we can best view it as a false flag attack designed to take down our nation. The rest of the countries that are suffering the effects of the virus and/or similar lockdowns are likely viewed by the perpetrators as collateral damage.

Also, consider that we were shown video from China, no doubt carefully selected, of people collapsing in the street, followed by the remarkable “shutdown” of whole cities with huge populations, and the few people walking in the empty streets were wearing medical masks. This was the template we were meant to see, and to copy in turn. But China is a Communist dictatorship! Their government can do whatever it wants. America is the opposite of that. Yet this minor distinction got lost in the shuffle. By the way, since when do you quarantine healthy people, let alone quarantine an entire country? I thought you quarantine the sick…but I digress.

If in fact the pandemic was a planned attack on America for multiple nefarious purposes, doesn’t that mean that China engineered it and is alone responsible? Well, no—though clearly China is a co-conspirator in this massive operation, and America is clearly the primary target. But our invisible enemy is also inside our gates. And speaking of gates, the power-mad Mr. Gates himself is probably the most recognizable face of the enemy—his newest weapons being his proposed ID2020 and a rush-job on a new pandemic-related vaccine which he intends to bully everyone on the planet except his elite pals to take. What could possibly go wrong?

Now I’m not saying the virus isn’t real. It is real. I’m not saying no one has died of it. Plenty of people, unfortunately, have died of it. But as we know now, its mortality rate is very similar to that of the seasonal flu. Yes there’ve been “hot spots,” but the entire country of America was never, I repeat, never at risk of the 2 million deaths the Medical Deep State was predicting.

Truth be told, and luckily for us, for a virus that was likely created as a bio-weapon, Covid-19 is a bit of a dud. The vast majority of people who get it easily recover. But that is a non-issue for our invisible enemy. They orchestrated the whole “pandemic” as a colossal psy-op using hype and fear-mongering on such a grand scale that they are pulling it off in spite of the virus mortality rates being as low as those of the ordinary flu we have each year—magnitudes lower than those of SARS or MERS or Ebola—for which we never shut down our nation. This is the power of the complicit media, reminiscent of the movie Wag the Dog in which an entire fake war is staged, filmed and broadcast to the public for political purposes. How much more diabolical is the current media manipulation of the American people.

But even if the death toll had been much higher, would combating the virus be worth losing our liberty and livelihood and Constitution? I’m with Patrick Henry on that one.

One more point: Recall that the Democrats were increasingly desperate to oust Trump, both to cover up their own treasonous coup plot and assorted felonies, and to position themselves for a win in November. And to add to their miseries, the Bern returned. The Dems knew they could pay off the ol’ Commie like they did last time, but all the kids getting excited over Bernie was worrisome to them. Who else could they go with? Liawatha? Little Mike? How about someone safe, whom they could position as a moderate to counter Trump? Of course: Sleepy Joe. Never mind that Biden’s dementia was worsening by the day. Get him in and make his running mate…let’s see…how about Michelle Obama? That way they could sneak Barry back into the White House to finish off the job of dismantling our Republic that he’d been so successful at during his 8 years with his feet on the desk in the Oval Office when he could tear himself away from the golf course.

Destruction of America was always their goal. What a coincidence that the Wuhan flu epidemic came along just in time to greatly help the Democrats and fulfill so many of Nancy Pelosi’s prayers. Apparently, they got tired of waiting to take Trump down, which wasn’t working anyway, so they decided to go for broke now, no doubt with the international globalist NWO types behind them. Hence the false flag operation known as Covid-19.

Back to Mr. Bezmenov.

In that same 1984 interview, he warned Americans of a “ticking time bomb” unrecognized in our midst: “If people fail to grasp the imminence of this danger and this development, nothing will help the United States. You can say goodbye to your freedoms. All your freedoms disappear; they will be charred in a few seconds—and with your precious lives.”

Now ask yourself: haven’t our freedoms literally disappeared—haven’t they been “charred” in a few weeks? Look around you. We’re not in Kansas anymore. We’re not even recognizable as America today. In fact in California, Governor Newsom has all but declared martial law, threatening to bring in police to keep people off the beach! Just as bad if not worse, he’s outlawed a planned protest in Sacramento by refusing to issue the requested permit. I suspect angry citizens will show up anyway, carrying their own permits: pocket versions of the Constitution.

Will these outrages, oppression, and governmental tyranny become the “new normal” in America?

Going back to the “new normal” once more, The Atlantic ran an article with the headline: The Pandemic Will Change American Retail Forever. This is not good news. Small business retail, which is what that article refers to, represents American entrepreneurialism at its best—people pursuing their happiness, and adding to ours in the process. These hardworking, largely middle class people are the backbone of America. The middle class is America! That’s part of what makes us unique. Most countries have plenty of poor people and a small group of fat cats at the top—but no middle class. And without our small businesses, life would be instantly grimmer. Imagine nothing but Amazon’s online empire and a few big box stores with poor quality stuff from China—yes, China— for sale. Might as well stay home for good so you don’t have to put on your suffocating face mask anymore—because the powers-that-be may well make that particular unhealthy indignity permanent.

Will these outrages, oppression, and governmental tyranny become the “new normal” in America? As Patrick Henry once proclaimed, “Is life so dear, or peace so sweet, as to be purchased at the price of chains and slavery? Forbid it, Almighty God!”

Can we come through this nightmare and take our country back? I believe we can.

But I also believe that the longer the lockdowns and shutdowns are allowed to continue, the harder it will be to ever return to the America we know and love. I’m concerned that many people will be psychologically imprinted with this “new normal,” in which they have essentially become passive wards of the state.

Patriots need to recognize how high the stakes are and to act accordingly.

And President Trump needs to fight the real war—the one that is on the verge of taking down America for good!