For this milestone, we'd like to thank our outstanding writers, and our loyal following of grassroots-minded conservatives.

This remarkable surge is all the more notable when we consider that for most of the past two years, we were stuck at a plateau of about 10,000 Facebook fans. In little more than six months, RA's Facebook page has mushroomed by 100,000 fans.

That's an increase of 1000 percent in less than a year, an increase that began to take off markedly in late summer, around September.

As a result, RA's Facebook page had a "reach" for the week just ending of 1.3 million individuals, as gauged by how many worldwide Facebook fans saw postings from RA's FB page.

The only thing we're doing differently is engaging in overt activism on a scale we hadn't previously done. Other than that, there seems to be no other explanation for RA's dramatic increase in Facebook influence.

And what has this activism centered in? For the past year – but in real earnest for the past half-year – RenewAmerica's activism has mainly focused ON THE IMPEACHMENT AND REMOVAL OF BARACK OBAMA AND HIS ACCOMPLICES, including Vice President Biden, Attorney General Eric Holder, and other co-conspirators in criminal mischief.

This activism is based on the profound perspective and courageous writings of Dr. Alan Keyes (the only person, by the way, ever to take on Barack Obama in a truly contested election, in our judgment, when both vied for Illinois' open U.S. Senate seat in 2004 – so he has an insider's view). And though we regularly publish Alan's writings, it wasn't until we featured his brilliant practical plan for impeachment titled "A Bucket Brigade" in August 2013 that we saw our reach literally start to explode. 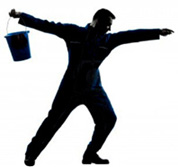 Following our publication at RenewAmerica of Keyes' "Bucket Brigade" plan, with prominent links and references to it at our Facebook page, we immediately began devising practical strategies for getting this plan into the hands of grassroots Americans.

The result – in partnership with Alan's Conservative Majority PAC – is a unique activist website called PledgeToImpeach.com, which has a two-fold strategic focus designed to bring about the impeachment and removal of the radical, treasonous characters now occupying the White House:
By design, both focuses are primarily educational: they are meant to teach, inform, and equip the grassroots and aspiring leaders, while motivating them to do their part to impeach and remove.

To the extent concerned citizens and oath-honoring candidates rise to the occasion and stand forth in accepting their constitutional duty, we're encouraged and gratified. But seeds must first be sown, of course, if fruit is ever to be borne. That is especially true of an issue that is continually discouraged by powerful voices among conservatives like Rush Limbaugh and the Republican Party leadership – impeachment – with predictions it will never happen to the most lawless, most dangerous president in our nation's history. These voices include almost all conservative media, with the notable exception of WND.

We find this astonishing, since the only constitutional remedy to Mr. Obama's unrestrained lawlessness is impeachment and removal. To ignore this reality is to allow Obama to pursue his unprecedented assault on the Constitution unchecked, with no serious, concerted opposition.

Thankfully, ordinary Americans tend to have more common sense than their leaders and spokesmen, and this is evident at RA's Facebook page, where interest in impeachment is reflected in our exploding numbers.

At least, that's what we think we're seeing at our Facebook page, which on the whole attracts the same kind of principled, God-fearing patrons RenewAmerica typically attracts.

As such citizens awaken to their duty to stand against godless tyranny and protect their God-given rights and freedoms (and those of their children), they begin to discover newfound integrity, resolve, and righteous indignation that set them apart from the faithless. That's particularly true if they follow the example of their forebears and turn to their Maker for support. They then increasingly resemble the "patriots on the green" at Lexington and Concord.

The rapid growth of RA's Facebook page in recent months suggests this phenomenon is at work. One thing seems certain at this point. Americans as a whole are coming more and more to the realization that the only choice they have left as citizens is between IMPEACHMENT and DICTATORSHIP, as Dr. Keyes masterfully argued recently at his blog. All of us would do well to read his persuasive masterpiece titled "The choice: Impeachment or dictatorship," if we care about the future of our country – and then get down on our knees and plead for divine strength to do what the Constitution requires of us:

"The President, Vice President and all civil officers of the United States, shall be removed from office on impeachment for, and conviction of, treason, bribery, or other high crimes and misdemeanors" (Art. 2, Sec. 4).

With the help of God, this auspicious outcome is up to us, the People, to make happen – as we humbly entrust our lives and safety to His care, seek His forgiveness for our individual and national sins, and undertake to fulfill our civic duty.