Alan Keyes
'A Bucket Brigade': The most simple, feasible way to take back America!

WND.com is reporting on the activities of people who have been gathering on highway and other overpasses in different parts of the country with signs advocating the impeachment of Barack Obama. Practically every day brings fresh evidence that Obama and his appointed henchmen have abandoned their oath to uphold the Constitution. Major elements of their policy agenda directly and plainly violate the Constitution, including:
All these policies, and the malfeasant actions and activities to which they give rise, constitute high crimes and misdemeanors within the meaning of the constitutional language that specifies the terms on which the U.S. House and Senate, respectively, may move to impeach and remove civil officers of the United States. The people around the country calling for impeachment are therefore fully justified in their demand. Moreover, the number (and insolent willfulness) of ongoing offenses more than justifies the conclusion, being reached by an ever-growing number of Americans, that these high crimes and misdemeanors are part of a "long train of abuses and usurpations, pursuing invariably the same object" which "evinces a design to reduce them under absolute despotism."

The aggrieved grassroots — not the GOP — must lead the effort to impeach! 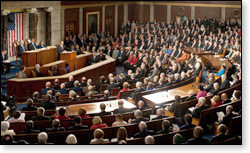 By demonstrating their strong feelings on this subject, the people gathering at overpasses throughout the nation are taking an important first step toward achieving the result America requires. But their well-intentioned movement could end up being a waste of resources and energy unless and until they focus on the means the U.S. Constitution provides to implement their good intention. Obama and his minions can and should be impeached and removed from office. The process could begin in short order, within a few weeks of the time the new Congress convenes in 2015. The aim would be to achieve a simple majority of representatives in the U.S. House willing to impeach Obama and his minions, and two-thirds of the Senators in the U.S. Senate willing to remove them.

Contrary to what some people want us to believe, the Democrat Party is not the primary obstacle to achieving this objective. Their opposition can only come into play if and when the goal of impeachment and removal becomes the major focus of the elections in 2014. If, in 2014, the sham two-party system continues to dominate the politics of the congressional elections, there is no chance whatsoever that this will be the case. Since even before Obama took office, and despite regaining control of the U.S. House in 2010 and 2012, the GOP leadership — and particularly its congressional leadership — has been collaborating with Obama and his minions.

We've heard some lip-service opposition. We've seen some deceitfully choreographed displays of political wrestling. But only during exhibition matches. In the real title matches (Obamacare, key national security and diplomatic appointments, implementation of policies hostile to the Constitution and our unalienable rights, the imposition of debt servitude on this and succeeding generations, the neglect of our borders, illegal immigration's subversion of our national sovereignty), the GOP leaders have done the bidding of their elitist faction masters. They have worked to make sure Obama's socialist, totalitarian, anti-constitutional, anti-American agenda moves ahead.

The GOP never effectively challenged Obama to prove that he is eligible, under the Constitution, to hold the office of President. In like fashion, they will never move to take the only steps that can actually put an end to his faction's ongoing assault on the Constitution as a whole. Mark my words, the GOP's leaders will not make impeachment and removal the focal point of the 2014 elections. Instead, they will work to discourage and undermine the deeply aggrieved grassroots citizens who know good and well that it should be.

The Constitution's remedy: a "bucket brigade"

The GOP leaders are likely to get away with this dereliction of their duty to the Constitution because most Americans have never taken the time to think through the electoral significance of the constitutional process for impeachment and removal. They don't realize that every two years, Americans who vote in the general election have the chance to cast a vote of no-confidence in the National Administration, including all the civil officers in each branch of government. A sufficiently strong political 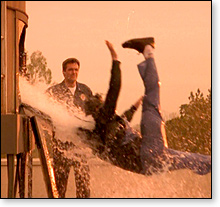 movement, clearly focused on achieving a congressional majority to impeach and remove the offenders, could throw them out, like a janitor pouring out a bucket of dirty suds. And starting at the top, they could replace them with people ready to clean up the government's act.

Let's say that when the smoke clears after the 2014 election, candidates who have pledged to initiate impeachment in Congress have been elected in sufficient numbers. Let's call them the "bucket brigade" for short. As the Congress organizes itself for action, the first step of the "bucket brigade" would be to elect, as Speaker of the U.S. House of Representatives, the person they believe best suited to take over the Office of President of the United States. This could be any qualified person in the U.S., since the Speaker does not have to be a member of the House.

The bucket brigade's second step would be to initiate impeachment against the President of the United States, as well as the Vice President. Should the process ultimately result in the removal of both the President and the Vice President, the Speaker of the House then assumes the Presidency. The bucket brigade might then proceed to remove all the civil officers implicated in the President's malfeasance. However, assuming that the new President asks for and receives the resignations of all current presidential appointees, this step would be unnecessary in most cases. In this way, the vote of no confidence achieved at the polls in the congressional elections would translate into a complete change in the national administration, including recalcitrant members of the Judiciary, if the need be.

So the overpass demonstrators are right to assume that we cannot and should not wait until 2016 to refresh our political life. Well before then, we can end the elitist faction putsch. There is a constitutional way to achieve that goal. But how many Americans know of it? Some have thus far invested themselves in an effort to show how they feel. But how many of them realize what could be done with the good fruit (contacts, social networks, etc.) of that effort? How many of them will give priority to organizing the electoral movement that could make the 2014 elections a returning point for America's self-government?

The key to that movement has nothing to do with sham party labels. The sham party system is a carefully-constructed diversion. The key to success is to demand that candidates take a solemn oath to impeach and remove those who are conniving to overthrow our Constitution, trample our unalienable rights, and rape us of our national birthright, which is God-acknowledging liberty. Find and swear-in the "bucket brigade." And once they're elected, sit on them to make sure they get the job done quickly.

Impeachment: Rush is wrong this time.

Why impeachment is the only way.
To see more articles by Dr. Keyes, visit his blog at LoyalToLiberty.com and his commentary at WND.com and BarbWire.com.