Matt C. Abbott
The origin of the Christmas tree; 'Beauty in their gravel roads'

December 22, 2008
From the bulletin of St. John Cantius Parish in Chicago:

Father Francis Weiser, S.J., in The Christmas Book, tells the story of the Christmas tree.

'The Christ tree is completely Christian in origin,' Father says, 'and historians have never been able to connect it in any way with ancient Germanic or Asiatic mythology. The origin of the Christmas tree goes back to the medieval German mystery plays. One of the most popular 'mysteries' was the Paradise play, representing the creation of man, the sin of Adam and Eve and their expulsion from Paradise. It usually closed with the consoling promise of the coming Savior and with a reference to His incarnation. This made the Paradise play a favorite pageant for Advent, and its closing scenes used to lead directly into the story of Bethlehem.

'These plays were performed either in the open, or the large squares in front of churches, or inside the house of God. The garden of Eden was indicated by a fir tree hung with apples; it represented both the 'Tree of Life' and the Tree of dis-cernment of good and evil' which stood in the center of Paradise.

'After the suppression of the mystery plays in churches, the Paradise tree, the only symbolic object of the play, found its way into the homes of the faithful, especially since many plays had interpreted it as a symbol of the coming Savior. Following this symbolism, in the fifteenth century the custom developed of decorating the Paradise tree, already bearing apples, with small white wafers representing the Holy Eucharist; thus, in legendary usage, the tree which had borne the fruit of sin for Adam and Eve, now bore the saving fruit of the Sacrament, symbolized by the wafers. These wafers were later replaced by little pieces of pastry cut in the shape of stars, angels, hearts, flowers, and bells.'

"I'd like to share some Christmas wishes with your readers. You'll see attached a photo we had taken in October of this year. Pictured are Bob, myself and our baby girl.

"Behind us are storm clouds, symbolizing the storm our family has made it through  as well as storms certain to come.

"The gravel road and gate represents the tougher, less traveled road we've taken. We like the Highwaymen song that says, 'True love travels on a gravel road.'

"The best part of the photo is the sun shining on our faces and foreground, despite the storm. Hope.

"And yes, the motorcycle represents freedom and zest for life. Bob is a suicide survivor. I survived near death in childbirth. Our baby girl survived eight weeks of prematurity.

"With all the doom and gloom in the news today, may your readers stop and see beauty in their gravel roads." 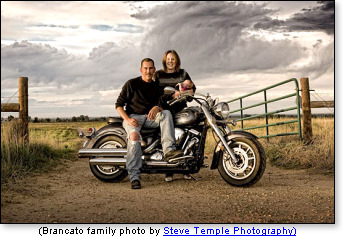 I wish all my readers a very blessed Christmas season. Please pray for me.