February 10, 2009
I asked Father John Trigilio, president of the Confraternity of Catholic Clergy, for his take on the recent developments involving Legionaries of Christ founder Father Marcial Maciel. 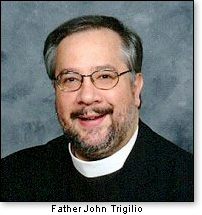 'It is with profound sadness that I learned of the scandalous revelations recently disclosed on the late founder of the Legionaries of Christ, Father Marcial Maciel Degollado. Anytime any of the clergy misbehave, it is not only a stain on the Church and the priesthood, but it is also a personal blow to every individual cleric since Holy Orders ontologically unites us together as ordained brothers in Christ the High Priest.

'On the one hand, we recall the common wisdom of 'There but for the grace of God go I,' meaning that none of us is without sin, none of us is perfect, and none of us can cast the first stone, so to speak. On the other hand, we cannot and should not sweep under the carpet any misdeeds especially when it involves the abuse  physical, emotional, sexual or spiritual  of children or adolescents.

'While personal weaknesses can often be overlooked if someone is trying to recover and repent, harm to any minor is something which cries to God for justice in this life as well as the life to come. If a priest, deacon or bishop has a gambling, drinking, or other addiction/problem, so does a similar percentage of the lay population. Abuse of children and teenagers, however, is reprehensible, inexcusable and repugnant and down right evil in its fullest sense. Other moral weaknesses harm the sinner more than anyone else. Abusing children, however, injures more innocent victims than one can imagine.

'Perfect men are not ordained and imperfect men are not ordained as perfect priests. Though we are all sinners, we are all called to persevere and never give up the struggle to do and to be better. Saints are not sinless human beings, rather, saints were sinful human beings who never quit and who never stopped trying to do and to be better. They all had weaknesses. Saints just did not make excuses for them nor did they rationalize them. Instead, by God's grace, they overcame their shortcomings and sins by hanging in there to the bitter end.

'That being said, no one should be surprised that there were some skeletons in Father Maciel's closet. Allegedly siring children out of wedlock and allegedly abusing teenage boys are bad enough but worse when done by a priest. Now that he is dead, we should still pray that the Good Lord would have mercy on his soul knowing that the justice of God cannot and will not be outmaneuvered.

'I know many good, orthodox, devout, pious and morally upright priests and seminarians and laity (Regnum Christi) in the Legionaries of Christ. The institute has done a lot of good in terms of vocations, catechesis, evangelization and the corporal and spiritual works of mercy. No sins or faults of the founder should tarnish the reputation or diminish the efficacy of the apostolates engaged and performed by the followers of this foundation.

'That being said, that does not mean that corrections are not in order. Besides the moral scandals involving the founder, the prudential judgment of other members is open to review. Certain editorials, editorial policies and public statements, made not by Father Maciel but followers of his, are not beyond scrutiny. Mistakes are made in seminaries, dioceses, religious communities and so on. Prudential judgments are open for interpretation and evaluation. Moral behavior is easily judged when one uses the wisdom of God found in the natural moral law and the divine positive law (as found in Sacred Scripture and Sacred Tradition) as the litmus.

'Perhaps a papal legate or visitator should be appointed by the Roman Pontiff to make whatever adjustments, improvements, or sanctions deemed necessary to preserve and enhance the Legionaries of Christ, Regnum Christi and Familia. We all need to pray for the members who have consistently and perennially remained faithful to their vows and who have not strayed from the path of righteousness. We need to thank and support the good, honest and often holy men and women, clergy and laity of the Legion who have brought nothing but honor and integrity to the Church.

'Every association, order, community, congregation and movement must also be vigilant about hero worship insofar as the founder is sometimes given too much emphasis. Saint Francis of Assisi, Saint Dominic, Saint Ignatius, Saint Benedict, Saint Augustine and Blessed Theresa of Calcutta and many others certainly attracted many vocations because of their personalities, which influenced the charisms of their societies.

'At the same time, these saintly men and women would never want their followers to have anyone other than Christ as supreme role models. The cult of personality does not always deteriorate into a full blown cult as the secular world uses the term. No saint who was not pope ever enjoyed infallibility and, other than Our Lady, no one has enjoyed impeccability, either. This is why followers today have no problem making adjustments or even improvements to constitutions devised by the original founder or foundress.

'The Legion will survive and might be a little leaner, but a lot stronger, too. The good done in the past and present should never be forgotten or ignored and the good yet to come should be appreciated and anticipated.

'(Likewise, a full and complete reconciliation and reintegration of the Society of St. Pius X is possible, and necessary, but it too will have to eliminate any hero worship of the late Archbishop Lefebvre and certainly will also entail a repudiation of the egregious and abhorrent proclamations of Bishop Richard Williamson. Since he is still alive, he can and ought to repent and recant and then he can be truly reconciled after some form of public penance has been made. I would advocate an early retirement and not allow any return to seminary rectorship nor to any exercise of episcopal authority.)

'The Legionaries of Christ have been and continue to be blessing to the Church, but just like Opus Dei and Communion and Liberation, it is not for everyone. Their spirituality is not the only valid or effective one. Many valid forms and flavors exist (hence the mark of universality or Catholicity) that remain orthodox and authentically Catholic. Cursillo and the Charismatic Movement do not exhaust the varieties of ways the Holy Spirit can lead souls into the Church. All valid ecclesial communities and their respective founders are here for one purpose, to facilitate the will of God, not the will of one man or one woman, but the will of the one, triune God.

'I hope and pray there is no witch hunt or purge in the Legion because of the recent revelations. My prayer is that Rome takes a strong and personal interest in helping the community whereas the enemies and opponents of the Legion merely want revenge.

'When Saint John of the Cross and others reformed their orders, they met with adversity but later were vindicated by the fruits of their labors. Maybe the Legion needs a major overhaul or reform, or it may need only a good fine-tuning and adjustment. A papal legate or visitator with full authority from the Holy Father should decide that or recommend to the pope himself. Everyone else should leave internal matters to those who are in the family.

'This is the beauty and wisdom of God that Jesus founded the Church on one person, Peter and his successors. Founders and foundresses may have some spiritual guidance but only the Vicar of Christ enjoys the charism of infallibility and the awesome responsibility of full, supreme, immediate and universal authority.'