Matt C. Abbott
Priests speak out on morality of gun ownership, use; Pro-life words of wisdom

March 18, 2009
I've asked selected priests  those loyal to the Magisterium  about their thoughts regarding the morality of gun ownership and use. Here are the responses I've received thus far:

'First, it's a little difficult to answer from the perspective of faith alone because I'm American and a conservative one at that. However, I'll try my best to restrict my answer to the Church's teaching. The answer is based on two principles:

'1) Every person has the right to self defense. St. Thomas Aquinas teaches: 'Accordingly the act of self-defense may have two effects, one is the saving of one's life, the other is the slaying of the aggressor. Therefore this act, since one's intention is to save one's own life, is not unlawful, seeing that it is natural to everything to keep itself in 'being,' as far as possible.' (Summa Theologiae, II-II, q. 64, art. 7.)

'According to this principle, it would seem that every person has a right to bear arms in order to justly defend himself. Yet, at the same time:

'2) The state has the obligation based on justice to uphold the common good by making laws to protect it's citizens. It has the power (and obligation) to determine how to do this based on natural law. St. Thomas Aquinas says: 'Now the end of law is the common good; because, as Isidore says (Etym. v, 21) that 'law should be framed, not for any private benefit, but for the common good of all the citizens.' Hence human laws should be proportionate to the common good. Now the common good comprises many things. Wherefore law should take account of many things, as to persons, as to matters, and as to times. Because the community of the state is composed of many persons; and its good is procured by many actions; nor is it established to endure for only a short time, but to last for all time by the citizens succeeding one another, as Augustine says (De Civ. Dei ii, 21; xxii, 6)' (Summa Theologiae, I IIae, q. 96, art.1)

'So, the state can make laws that either allow or prohibit the bearing of arms for the right of self-defense, based on the circumstances and people of the state, for the common good. For this reason, the Catechism (paragraph 2316) says, 'The production and the sale of arms affect the common good of nations and of the international community. Hence public authorities have the right and duty to regulate them.'

'To what extent they should be regulated is based on the prudential decisions of those who govern the state. This is where legitimate debate comes in.

'To sum up: It is perfectly acceptable for a person to bear arms for the sake of self-defense  which is his right  unless the state deems it necessary, because of the common good, that they be regulated otherwise.'

'While I have never owned one of my own, I have done sport shooting (gun range) on a number of occasions, so obviously I don't have any major problems with the idea of gun ownership/use. I do believe there is a justice issue regarding restriction on assault style weapons  equipment that basically belongs in a military/police setting  and basic laws requiring safety practices in a home where there are minors present. Any further restrictions at the governmental level would be an injustice; failure to exercise those due safety factors putting someone at risk would be an immorality.'

'Aristotle once said that a democracy is only possible with a virtuous people. The Founding Fathers understood this principle and based the establishment of our country upon the assumption that our people would be a moral people; i.e., a people capable of governing themselves. When a people become immoral and corrupt, a republic or a democracy is impossible. Freedom is lost and government becomes intrusive and controlling. Only a people capable of self-control can have the privilege of the right to bear arms. Guns in the hands of an immoral people will only lead to further tragedies.' 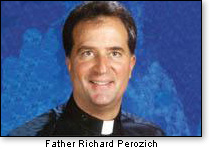 'I don't personally have [a gun]. I know priests who do  those who hunt  and I believe as an American, not necessarily as a Catholic, that a right to bear arms for defense and for hunting is important.'

Assertion: The answer to abortion is not in making it against the law but in changing hearts.

'The answer to all of humanity's problems is in changing hearts. In fact, we wouldn't need any laws if everyone would always do what is right instead of what is wrong. But until that day comes, we have to have laws. We must remember that the role of the law is not to change hearts but to restrain the heartless. As Martin Luther King once pointed out, the law could not make people love him but it could keep people from lynching him.

'In America today, hired serial killers are butchering innocent and defenseless children by the millions. They are the heartless who must be restrained. Our government has no right to allow victims to be murdered waiting for the murderers to have a change of heart. In the real world, most people who commit evil will never have a change of heart and their innocent victims are entitled to legal protection. The bottom line is, if abortion is not murder, why do we need this change of heart? If it is murder, why do we allow the heartless to do it?'

Assertion: Abortion is just one of many issues the church has to be concerned about. The economy, the homeless, the death penalty, U.S. military policy, education, health care, and hunger are important too.

'Sometimes called the 'Seamless Garment' or the 'Consistent Ethic of Life,' this philosophy is generally advanced by two groups of people. The first group is closet pro-aborts, or abortion agnostics, who want to avoid revealing their positions on abortion. The other group consists of luke-warm pro-lifers who are looking for some way to justify their own  or their church's  inaction on abortion.

'By equating abortion with other social ills, both groups are attempting to neutralize the abortion issue and silence pro-lifers. This argument is also commonly used by people who call themselves Christians but want to justify voting for a pro-abortion politician. To expose what a scam this really is, just ask one of these people if they would ever vote for a white supremacist on the basis that race is just 'one of many issues.'

'Obviously, there is no denying that America faces many societal problems. However, if abortion is the taking of a human life  and even many pro-aborts are now openly admitting that it is  then our country is engaged in the largest holocaust in world history. To suggest that the wholesale slaughter of 45 million children  a number which increases by more than 3,000 each day  is even in the same universe as tax policy, or homelessness, or poverty, or any other issue is indefensible. For someone who claims to be a Christian to make such a statement is pornographic.

'Of course, if the people who take this approach were the ones who might be sliced open alive and have their heads crushed, it's pretty certain they would suddenly stop saying that abortion is just 'one of many issues.''