May 19, 2010
I'm genuinely torn on the issue of illegal immigration in general and Arizona's new law in particular. Perhaps I shouldn't be, but I am.

In 2004 I wrote a short essay asserting that undocumented/illegal immigrants should be given legal status. Presently, however, I'm not so sure that position is the most prudent one to take. Ditto with regard to Arizona's controversial anti-illegal immigration law. Sure, the United States Conference of Catholic Bishops is against it (although I don't think every bishop is against it entirely), but a reading of the Catechism of the Catholic Church makes the USCCB's position seemingly debatable:

The more prosperous nations are obliged, to the extent they are able, to welcome the foreigner in search of the security and the means of livelihood which he cannot find in his country of origin. Public authorities should see to it that the natural right is respected that places a guest under the protection of those who receive him.

Political authorities, for the sake of the common good for which they are responsible, may make the exercise of the right to immigrate subject to various juridical conditions, especially with regard to the immigrants' duties toward their country of adoption. Immigrants are obliged to respect with gratitude the material and spiritual heritage of the country that receives them, to obey its laws and to assist in carrying civic burdens. (2241)

That second paragraph is key. Being a border state, Arizona is obviously affected more  and considerably so  by illegal immigration than non-border states. Thus, a (state) law cracking down on undocumented/illegal immigrants seems to fall under the "for the sake of the common good" category to which the Catechism is referring. Now, if we're talking about an intrinsically evil/unjust law, i.e. one that facilitates abortion or euthanasia, that's a different story. But I don't see how Arizona's law can be considered an intrinsically evil/unjust law. In other words, it's a grey area. Or am I missing something?

ST. LOUIS PARK, Minnesota (May 17, 2010)  Chesterton Academy, a private, independent college preparatory school, announced today that it has received an exciting fundraising opportunity from Andrew Redleaf, founder and CEO of Whitebox Advisors. Mr. Redleaf has agreed to match, dollar for dollar, any donations that come into Chesterton Academy between now and June 15, up to $75,000. To be eligible for the match, gifts must be new and cannot be the fulfillment of commitments previously made.

News of the challenge grant comes near the end of the second year of operation for Chesterton Academy, a classical high school 'in the Catholic tradition' started in fall of 2008 with just 10 students. Today, the school enrolls 20 students in grades nine, ten, and eleven, and expects to add 15 to 20 students when the 2010-2011 school year begins this fall. The result of a grass-roots movement of parents, the school is named for the great English writer, G.K. Chesterton, who, among many other achievements, was one of the first English-speaking writers to predict and condemn Adolf Hitler's holocaust against the Jews.

Mr. Redleaf is a native of the Twin Cities and a graduate of St. Paul Academy and Yale University. A passionate supporter of classical education, Redleaf cites three particular achievements that led him to support Chesterton Academy.

Citing his concern with "the national decline in educational achievement among young men" Redleaf notes that at co-ed Chesterton "it's cool to be smart, even for the boys. We need more of that."

Redleaf, who is Jewish, adds that by "offering a rigorous classical education at a price middle class families can afford, Chesterton provides a huge service to our entire community. I hope many more non-Catholics in the Twin Cities will join me in supporting that effort."

"Besides," he points out, "what the folks at Chesterton call 'the Catholic tradition' are really foundational values of our civilization. And with all due respect to my Catholic friends, the Catholics weren't the first to discover those values."

Redleaf's company, Whitebox Advisors, is an investment adviser located in Minneapolis. The firm manages approximately $3 billion and employs over 70 professionals....

Redleaf's gift is among the largest received by Chesterton Academy since its founding. The school relies heavily on fundraising, as it receives no public support. In order to keep the school affordable, the school charges only $5,500 in tuition, roughly half of the actual cost of educating a student.

The result of a grass-roots movement of parents, Chesterton Academy is a pro-family, independent high school offering an integrated, college preparatory curriculum centered on the Incarnation of Jesus Christ. Focusing on the classics, the school develops complete thinkers who learn to draw on faith and reason for the purpose of building a culture of life. Visit www.chestertonacademy.org.

"The United for Life congress is a project of Manto de Guadalupe, an international aid organization that promotes human dignity throughout the world and brings relief to those suffering extreme poverty. Manto de Guadalupe's mission includes building homes, delivering food and medicine, and providing lifesaving assistance to impoverished pregnant women." 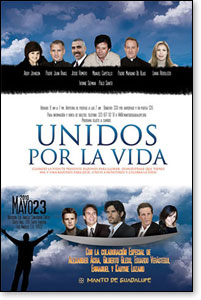 "The funds raised through our United for Life Family Congress will be used to open a medical center in Los Angeles that provides free, high-quality care for pregnant women and their preborn babies. The Guadalupe Medical Center will be located in an area that has 10 abortion facilities. Therefore, our center will be an oasis of life in the midst of a desert of death. Just as Latinos have had their dignity undermined by negative stereotypes in the media, so too have preborn babies had their dignity denied since the controversial 1973 Roe v. Wade Supreme Court decision. It is the mission of Manto de Guadalupe to promote the dignity of the human person with a special focus on restoring honor and dignity to Latinos  from the child in her father's arms to the child in her mother's womb, from the embryo to the elderly."

For more information about this event, visit www.AnitaCrane.com.