June 25, 2010
The stench of the late Father Marcial Maciel's rotting corpse still permeates the air and continues to make headlines, so to speak.

What struck (and disturbed) me was a recent quote by Maciel's son  whom Maciel reportedly abused  Raul Gonzalez, who said: "My dad [Maciel] told my mom that when John Paul II dies, he was going to be in trouble."

To those who revere John Paul II, that quote should be troubling.

What do we make of the late pope's "role" in the Maciel/Legion of Christ/Regnum Christi scandal? I asked Father John Trigilio Jr., author and president of the Confraternity of Catholic Clergy, to comment on the media's portrayal of this matter. 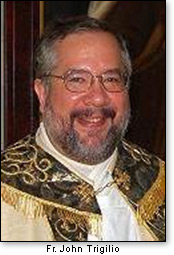 "The mainstream media's addiction to anti-Catholicism is no less voracious than a junkie on heroin. Pope John Paul II is not alive and cannot defend himself, so some in the secular press feel even more emboldened to trash his reputation by making preposterous allegations. Only a coward hits a man when he is down, but even worse is someone who kicks a dead man. What bravery or honor is there in trashing someone who is unable to defend himself?

"Innuendo, implications, and theories make good pulp fiction but would never stand in a court of law. Hard, cold, objective evidence. That's what a judge and jury want, but audiences watching TV or getting entertained by the news are seeking something other than the truth. Hence, the media recreate history and reality. They re-define what actually happened. Conjecture and supposition are not proofs of guilt. Yet, is not a man innocent until proven guilty? That apparently does not apply when you are a Catholic cleric.

"If the secular press did this to people in the business, political, sports or entertainment world, they would be sued for defamation of character, slander and libel. When it's a bizarre story about a priest, bishop, or best yet, the pope, there seems to be more zeal to believe the most incredulous of accusations.

"Marcial Maciel was the most clandestine person the world has ever seen. He was a master of deception and deceit. Like a double-agent spy, he fooled everyone, especially his own colleagues. His secret life of betrayal was not unique, however. A famous TV reporter had two wives and two families, one on each coast, and neither one knew about the other until he died. It can be done. Government, corporate and military folks have spied on the U.S. for decades and escaped detection. How? They're good liars. That a priest could cover-up his misdeeds and have children and 'wives' in different towns, states and countries is not beyond the realm of credibility when you're dealing with a crafty person. If it can be done in the secular world, it can often be done in the religious  even though it's morally forbidden and reprehensible.

"Maciel fooled even the pope. It's been done before. Papal infallibility applies only to solemn definitions on faith and morals; it is not a guarantee of superb prudential judgment. Holy, saintly popes have been duped and deceived by bad people. The world has been fooled time and time again, whether it was an alleged flying saucer or a balloon initially reported to have a child aboard. Hence, I'm not scandalized that Maciel fooled someone as intelligent and sophisticated as John Paul II.

"The SIS and the CIA were fooled into believing that Saddam Hussein had 'weapons of mass destruction,' and they in turn convinced the U.N. and the world of this. Smart people can be deceived. It's not a moral weakness and it's not a culpable matter. Being duped does not imply or infer any formal cooperation. Being fooled does not make you an accessory or collaborator.

"Then why do allegations on national networks come up now attempting to vilify John Paul II? He was unaware of Maciel's hidden and secret life, just as many were unaware of the now notorious sleeper spies and moles in the FBI, CIA, British Intelligence and so on. We live in a post-Da Vinci Code era where fact and fiction get blurred to make entertaining material. It has crept into and infested the secular media as well, especially when it concerns religion and most of all when it deals with the Catholic Church.

"Note the staunch defense of detractors to Pope Pius XII, even when evidence is amassed day by day and year by year that he did not turn his back on European Jews during World War II. Rather, he did all and everything in his power to save and spare as many as he could. His response in the 1940s may have been different to what a pope in the 21st century would do, but we also live in an age where information floods every vehicle, from radio, TV, print and the Internet.

"Half a century ago, there was such a thing as news blackouts and state propaganda (ala Josef Goebbels). Golda Meir, prime minister of Israel and the chief rabbi of Rome all praised Papa Pacelli at the end of the war for his efforts to save and help Jews from Nazi evil. He did not and could not save them all, but he did a lot more than Franklin D. Roosevelt or Winston Churchill, who had armies at their disposal. It is fashionable today to insult the memory of Pius XII as if given he did little or nothing to help Jews during the war. Evidence proves the contrary, but the Da Vinci Code culture thrives on conspiracy.

"A gullible person will believe John Paul II knew about Maciel's double or triple life and just took a blind eye and deaf ear to it. Rational people, however, will see things as they are: An evil man (Maciel) fooled good and even holy people. Again, it's been done before and will be done again. Only a fool would fall for the ludicrous trap that being deceived makes you share in the culpability of the one perpetrating the deception.

"I would never attack the families Maciel deceived, either. They were innocently fooled. So was Pope John Paul II and so were many of us who were duped by a master impersonator."