June 26, 2011
A Chicago priest has spoken out on a controversial, politically-incorrect topic.

And, no, it isn't Father Michael Pfleger.

'Someone called my attention the other day to the fact that the Feast of Charles Lwanga and his companions, the young martyrs of Uganda, was the day that Illinois declared same-sex marriage legal. Don't let the subterfuge of civil unions fool you: Civil union is what Illinois, in any other circumstances, calls marriage.

'Now there was a tremendous irony in the juxtaposition of the occurrences. Let me explain. Charles Lwanga and his companions, some of whom were Anglicans (Episcopalians), were among the first of the Africans to become Christian.

'It wasn't that long ago. Africa has become so Christian, so Catholic, that they are now sending missionaries to America — we who thought we knew it all. Well it seems that we need the help and religion of those who only three generations ago were worshipping false idols, as we do now in America. We must be totally grateful for the faith of the Africans and their desire to help us maintain what is left of ours. 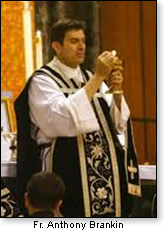 'But anyway, Charles and his companions were the first in Africa to learn about Jesus and Mary and the saints and angels — and to love them. And my goodness, did it make them happy to know now about the true God and how much He loved them. Now these young people were members of the court of the king of Uganda; they were his pages and helpers. They were pretty much at the top of their world already.

'Oh ...but their king was an awful person. He was the dirty old man par excellence. He wanted them to get involved with him in homosexual activities. He offered them the chance to be rich and powerful and desirable themselves. He promised them higher status, greater position, more clothes, better food and great places to live. And everyone, all their friends and cousins and even their enemies, would bow and scrape before them as everyone bowed and scraped before him, the king.

'All they had to do was obey him and do something bad. Do something unnatural and impure. But they refused. They said no. They didn't hem or haw or try to make deals or think of tricky ways to get out of it. They would not sin! Knowing the outcome, they told him, in no uncertain terms, they would not do anything so perverted and evil.

'But Charles and his companions would not go along. They said, 'We do not do evil, even if the king asks it, even if the highest person in the world wants us to do something wrong. We will not do it!' And so the king, whose name no one remembers, killed them outright.

'Some he pierced through with a sword. Some he burned alive. There they were, as young as could be, with their whole lives and futures ahead of them, success and wealth and honor as the pride of their families; there they are dead at the king's feet, lying in a pool of blood and a shower of tears from their mothers and fathers, because they would not sin.

'Ah, but each one's strength had been the strength of ten because their hearts were pure. And their names and deeds and heroism have lived on among us for a hundred years and will live on for a thousand more. And they will forever be a model for youth — and even for us oldsters — an example of heroic dignity, nobility, virtue, loyalty, holiness and goodness for all generations to come; and a model, even if no one understands it anymore — a model of sexual purity.

'And I say 'even if no one understands it anymore' because I really do fear that we hardly understand the concept of immorality in general, and of the immorality of homosexual activity in particular, any more. Back in the 19th century, the libertine poets, artistic champions of free-and unfettered lust, used to call this particular vice 'the love that dare not speak its name.' Now it can't shut up.

'It is bombarding us 24 hours a day, seven days a week. Every show has the homosexual component. The propaganda machine is in full active mode; and they are relentless and unyielding in promoting and telling us how good homosexuality is.

'This is the full court press if there ever was one. Modern media life has become all about us accepting homosexual behavior, about how wonderful it is, how it is just two sensitive guys holding hands, how they are a gift to the world, how if we are going to be nice to everyone, we need to embrace their lifestyle.

'I fear the constant barrage in the newspapers, the television, the media and movies has absolutely deadened our sensitivity to the wrongness of homosexuality. And why is it wrong? Because all this propaganda says that that kind of activity is equal to that between men and women — and it isn't. It cannot be — ever — and simply because that activity cannot yield the fruit of children. Life cannot issue forth from that kind of physicality.

'For God is the One who made human love, and made it beautiful so that from the love of male and female life comes forth! To pretend that all sexual activity is equal is a shame that the propagandists put on all married people. They are saying that the love between men and women is no more than what two guys get in a dark sleazy bar. Excuse me. That is wrong. And it is about time we started defending marriage by proclaiming that it is uniquely normal and that anything less is not normal; it is wrong and immoral.

'Certainly this was the sensitivity of Charles Lwanga and his companions. They knew the wrongness of homosexual acts and the horror of the sin that the king wanted them to commit. And they knew it so strongly that they went to their deaths rather than sin.

'I hope I recognize that those persons afflicted with this particular temptation have a daily struggle that reaches terrible proportions of anguish and suffering. But the God who loves them does love them. He is there with His grace and help and presence to help them through it all, just as He is there with the rest of us, giving us all the help we need to stay virtuous.

'But I can only imagine what the Tribune and the Sun-Times would make of the martyrdom of Charles. They would laugh and guffaw and scratch their heads in disbelief that someone actually thought that love is only between men and women and in marriage and for the sake of children. But it is. Even if no one understands it anymore. Even if they are going to throw us out of the synagogue of modern opinion for daring to say so and daring to be faithful to Christ.

'Love is about life, and nothing less.

'So I would say that it looks like we are all in for a little martyrdom — oh, maybe not as bloody as it was for Charles — but it will be just as intense. And the King that is tempting us is not the king of Uganda, but the king of this world. And he offers us the same blandishments that were offered to those young Africans: You will be cool and you will be accepted and you will be considered modern and hip if you accept this sin in your life. Everyone will like you — at least the ones who count, like the producers of Glee or the columnists in the Sun-Times. And how wonderful to know that Richard Roeper and Neil Steinberg are pleased with you!

'But thinking about it, I would rather please someone who was a hero to His faith, to His virtue, to His family — someone pretty much like Charles Lwanga and his companions!'