August 7, 2011
Earlier this year, I attended a talk given by Sister Jean Okroi, IBVM, on the evil of human trafficking. Quite an eye-opener, I must say. Sister has graciously provided me with some written information on the subject. (Certain quotes have been slightly edited.)

She writes that "human trafficking touches every corner of the globe, including the United States." It's the second largest and fastest growing crime in the world. Commonly known as modern-day slavery, traffickers buy and sell children, women and even men.

Sister writes that the driving force for human trafficking is greed — it generates $9 billion to $32 billion annually! 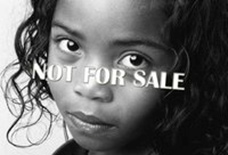 "The U.S. government estimates that 14,500 to 17,500 foreign nationals are trafficked to the U.S. each year. That number does not include the number of U.S. citizens trafficked annually. Victims of human trafficking have been identified in cities, suburbs, rural areas and in all 50 states.

"Human traffickers lure individuals into trafficking by using force, fraud or coercion. The age, race, economic bracket, education level, social standing or citizenship of victims does not make a difference. Once trafficked, they are placed into forced labor: in agriculture or construction, or as restaurant workers, drug mules, nannies, and so on. Prostitution seems to be the leading money-maker for traffickers."

She writes that consumerism fuels the filthy industry, and that traffickers can be "members of organized crime, small businesses, and even neighbors. We are only beginning to comprehend the scope of human trafficking here in the U.S. and around the world."

And get this: "The state of Illinois is considered a major hub, generating the fifth largest number of calls to the human trafficking hotline."

Great. The state in which I reside is riddled with human traffickers, abortionists, anti-family activists, anti-Catholic bigots, and — last but not least — corrupt politicians and clergy. Well, I suppose the same goes for many other states as well.

Sister concludes: "Look beneath the surface; this vile criminal action could be happening in your neighborhood or at your workplace. If you suspect such activity is occurring in your area, please call the toll-free hotline of the National Human Trafficking Resource Center: 1-888-373-7888."

Mary, mother of Our Lord Jesus Christ, pray for us.