March 12, 2012
From Mission: America and the Illinois Family Institute:

On April 20, 2012, the Gay, Lesbian and Straight Education Network (GLSEN) is once again exploiting public schools to promote homosexuality and gender confusion as moral and normative through the political protest called the Day of Silence.

A coalition of pro-family groups is urging parents to keep their children home from school on the Day of Silence, if your school is allowing students to refuse to speak in class.

GLSEN's Day of Silence, which began on college campuses and has now infiltrated even middle schools, exploits anti-bullying sentiment to undermine the belief that homosexual acts are immoral.

GLSEN shamelessly exploits teen suicide in order to create a climate of hysteria which they then use to falsely impute culpability for teen suicide to conservative moral beliefs. 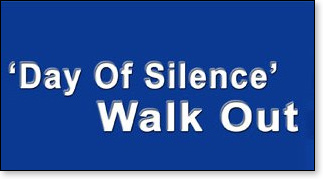 GLSEN's end game is the eradication of conservative moral beliefs and the creation of a social and political climate in which it is impossible to express them. Their cultural vehicle of choice for this radical social experiment is public education. What a strategic coup for homosexualists: use our money to capture the hearts and minds of our children.

Efforts to exploit public education for the purpose of eradicating conservative moral beliefs are dramatically increasing every year. Homosexual activists and their allies are aggressively targeting younger and younger children through anti-bullying laws, policies, and curricula; through the effort to nationalize comprehensive sex education; through laws mandating positive portrayals of homosexuality and gender deviance in curricula; and through events like the Day of Silence, National Coming Out Day, Ally Week, Transgender Day of Remembrance; and Spirit Week.

And conservatives do virtually nothing. Our complacence makes us complicit in the damage done to our children and our culture. Moreover, we teach our children by example to be cowardly conformists. It's time to resist and there's no easier way to resist than to call your children out of school on the Day of Silence.

Parents and Guardians: Call your children's middle and high schools and ask if students and/or teachers will be permitted to refuse to speak during class on Friday, April 20, 2012. If your administration allows students and/or teachers to refuse to speak during class, call your child out of school. Every student absence costs school districts money.

When administrators refuse to listen to reason and when they allow the classroom to be exploited for political purposes, parents must take action. If they don't, the politicization of the classroom and curricula will increase. If your administrator tells you that they do not permit students or teachers to refuse to speak in class, ask him or her how that is communicated to faculty and students and how it is enforced.

The ACLU has issued this statement to students regarding silence in class:


You do have a right to participate in Day of Silence and other expressions of your opinion at a public school during non-instructional time: the breaks between classes, before and after the school day, lunchtime, and any other free times during your day. You do not have a right to remain silent during class time if a teacher asks you to speak.


The idea that homosexual acts are moral, good, or normative is not a fact. It is an unproven, non-factual, controversial moral belief. As such, no government employee or publicly subsidized institution has the ethical right to teach it to children implicitly or explicitly. It is entirely possible for schools to work toward the important goal of eradicating bullying without affirming homosexuality or gender confusion.

It is unconscionable that conservative parents remain silent, acquiescent, fearful non-participants in our public schools while homosexuals and their ideological allies engage continuously in vociferous, vigorous, and bold action.

Conservatives need to start acting and speaking as if we think our moral beliefs are objectively true. Conservative teachers need to create activities that require students to speak on the Day of Silence, and conservative parents need to teach their children by example to take a stand for truth.

Please call your children out of school if your administration permits students to refuse to speak on the Day of Silence. For further information, including parental instructions and a sample calling out letter, visit www.doswalkout.net.


Many readers of this column will acknowledge that there exists in the Church a strong homosexual subculture. And there have been several priestly victims of that subculture. That's not to say that the subculture is, or was, the reason for every orthodox priest's troubles, but it has played a significant role overall.

I still receive occasional emails from concerned Catholics asking about the status of Father James Haley. You can read about his experiences with the subculture by clicking here. While I have not heard from Father Haley in some time, I could tell from our past correspondence that all was not well.


Well, the word coming down from on high is that Father Haley has been excommunicated and defrocked. This has been personally confirmed to me by someone who should know, but don't expect to hear about it anywhere official. There's something about this case that makes authorities skittish. After all, we can't acknowledge the elephant in the sanctuary, the homosexual priest problem. Every new homosexual scandal is met by the three monkeys with ears, eyes, and mouth covered. ('Psst ... ignore the elephant until he goes away.') So Father Haley will continue to be the invisible man....

Another victim of the subculture was Father John Minkler. Click here to read that sad story.

Currently making headlines is Father Marcel Guarnizo, who recently denied Holy Communion to a lesbian-activist (and an apparent Buddhist to boot). Now comes word that Father Guarnizo has been suspended by the Archdiocese of Washington. Click here for the details.

St. Joseph, pray for us.


I emailed this Lenten Message of Cardinal George to you with the hope that you will compliment the cardinal this time for his courage in responding to Obama's latest mandate amendment. You wrote a lengthy article ['The cardinal's apology'] quoting the Chicago Tribune and Laurie Higgins [of the Illinois Family Institute] expressing your disappointment for his repeated apologies. I appeal to your sense of fairness in journalism. Thank you and God bless!


I definitely give credit where credit is due. I'm very glad to see Cardinal George speaking out on this matter.

My hope is that the U.S. bishops will continue to strongly oppose the Obama administration's unjust contraception mandate.