May 7, 2013
In 2011, I had the opportunity to hear a talk given by Hollywood actress-turned- Benedictine nun Dolores Hart at St. John Cantius Parish in Chicago. It was, needless to say, an edifying experience.

The following is the preface to the newly-published book The Ear of the Heart: An Actress' Journey from Hollywood to Holy Vows, authored by Mother Dolores Hart and Richard DeNeut.

Thanks to Ignatius Press and Carmel Communications for allowing me to reprint this material. Click here to order a copy of the book from the publisher.


What can be sweeter to us, dearest brethren, than this voice of our Lord inviting us? Behold, in his loving mercy the Lord showeth the way of life.


The Rule of Saint Benedict, composed in the year 530, is justly celebrated as an unerring guide for those seeking to dedicate their lives to God. The Rule is followed by the women in the Community of the Abbey of Regina Laudis in Bethlehem, Connecticut, which has been my home and my life for five decades.

Regina Laudis was elevated to the status of an abbey in 1976, but when I entered in 1963, it was a small, enclosed monastery. There was a considerable fuss made in the press at the time of my entrance because I had enjoyed some success as an actress in the movies and on the New York stage. From time to time over the years, there were invitations to write a memoir, and I gave the undertaking some small consideration. I had ample material to draw upon – I had kept journals from an early age and was an entrenched saver of letters and articles concerning my life – and I had no problem seeing myself in the driver's seat.

On a Sunday morning in 1997, however, my life changed dramatically. When I awoke and put my feet on the floor, I was unable to walk. Subsequently and belatedly, I was diagnosed with peripheral sensory neuropathy, a neurological disease affecting the peripheral nerves and causing severe chronic pain. For the next several years I experienced a dark night of the soul, unable to find any real relief from the pain or any

understanding of the cause of the disease. During this time my Community suggested again that I write the story of my life, which now seemed a total absurdity since I had no command of my arms, hands or feet and my mind was blistered with pain and anger. It was, I thought, impossible.

In 1982, Dick DeNeut had come to my aid as I was wrestling with the prospect of helping Patricia Neal with twelve hundred pages of unmanageable notes for her autobiography, As I Am, which with Dick's collaboration was published in 1988.

Dick is a close friend and a trusted confidant. In his childhood, he had been one of the darlings of the Our Gang comedies, and when we met in 1957 he still had boyish good looks and the most infectious Maurice Chevalier smile. He shared his knowledge about films and theater, which educated and enlightened me, and I was constantly astounded to see what I considered the best in the business fall by the sword of his unyielding standards and acerbic wit. Early in my acting career, Dick and I had a romantic relationship, but my religious vocation has allowed Dick and me to reconnect and to find a way to be committed in love through a greater body, that of Regina Laudis.

In 1970, when I pronounced my perpetual vows and was consecrated as a cloistered Benedictine nun, I invited Dick to hold my veil during the ceremony. I understood the extraordinary way in which he had "veiled" me throughout my professional life, making certain that my image was appropriately received by the press through his company,

Globe Photos. In every professional context, he was there to inform and address the world-at-large that my person was to be kept within a virginal integrity, and he maintained that demand fiercely. Catholic or not, he is for me a Saint Joseph person. 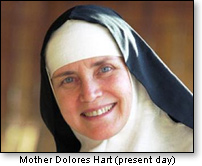 So when the Community asked me to write my story, I knew I needed Dick's help to do it. Our work began within unusual and challenging limits. He lives in Los Angeles, California; I in a cloistered abbey in Bethlehem, Connecticut. When Dick traveled to Regina Laudis, our meetings had to be conducted within the confines of the enclosure and during the few hours each day I had free from my duties as prioress and dean of education. This book represents a partnership that demanded not only honesty, integrity and trust, but professionalism of a high degree.

At the beginning of The Song of Bernadette, a film I saw as a child and still love, are these words from the author Franz Werfel: "For those who believe, no explanation is necessary; for those who do not, no explanation is possible." Nevertheless, I have presented in these pages the details of my life so far as a response to the question I have been asked countless times: How could I throw away a promising acting career for the monastic life of a cloistered nun?

I left the world I knew in order to reenter it on a more profound level. Many people don't understand the difference between a vocation and your own idea about something. A vocation is a call – one you don't necessarily want. The only thing I ever wanted to be was an actress. But I was called by God.