November 13, 2019
From the current meeting of the U.S. Catholic bishops, Bishop Joseph Strickland tweeted Nov. 12: "Thank God the USCCB voted to uphold the preeminence of the Sanctity of the life of the unborn. It is sad that 69 voted no." 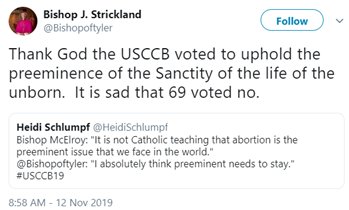 We don't yet know the names of those 69 bishops who voted no (plus four who abstained), although Cardinal Blase Cupich and Bishop Robert McElroy appear to be the main culprits. Go figure.

This morning during the Fall General Assembly of the United States Conference of Catholic Bishops (USCCB), the bishops debated, and voted upon, a letter based on the USCCB's document on political life, Forming Consciences for Faithful Citizens.

At issue was the letter's insistence that the slaughter of the unborn remains the pre-eminent social justice priority for the USCCB. Bishop Robert W. McElroy of San Diego objected, saying, 'It is not Catholic teaching that abortion is the pre-eminent issue that we face as the world in Catholic social teaching. It is not'.....

The debate began when Cardinal Blase J. Cupich of Chicago asked ... for an amendment to the short letter that would include the entire paragraph 101 from Pope Francis's controversial 2018 apostolic exhortation Gaudete et Exsultate.


I guess we can "thank" Cardinal Joseph Bernardin's seamless garment philosophy – which began to undermine the pro-life movement many years ago and continues to this day – for those 69 bishops' terribly misguided position (the most charitable explanation), cowardice and/or moral corruption.

The Rockefeller Foundation, notorious for promoting abortion and the LGBT agenda, is sponsoring a two-day Vatican conference under the auspices of Pope Francis and the Pontifical Academy of Sciences.

The conference, titled 'Reduction of Food Loss and Waste,' is being held at the Casina Pio IV on Nov. 11–12 and includes speakers from other pro-abortion bodies including the Bill & Melinda Gates Foundation....

Critics are questioning how the Vatican can allow the conference to be sponsored by bodies that discard as waste the most vulnerable human beings in the womb.

Edward Pentin, Vatican correspondent for National Catholic Register, who raised the question of Ford Foundation's funding for the Brazilian bishops' conference at the Amazon Synod, told Church Militant: 'This approach opens the Vatican up to criticism because it gives the impression that it doesn't really believe the Church's teaching on such a grave issue as abortion, but sees it as one moral issue among many, and on a par with environmental concern.'


The "ghost" of Bernardin continues to haunt the Church. Heck, it may even "possess" the present pontiff.