Matt C. Abbott
The exorcism and death of Anneliese Michel

January 16, 2020
The following are excerpts from the book Anneliese Michel: A True Story of a Case of Demonic Possession, by Father Jose Antonio Fortea and Lawrence E.U. LeBlanc. Thanks to Father Fortea and Mr. LeBlanc for permitting me to publish these excerpts in my column. Click here to order a copy of the book from SpiritDaily.com. (After reading the excerpts below, click here to listen to audio of the actual exorcism sessions, which occurred in Germany in 1976. Warning: the audio is quite disturbing.) 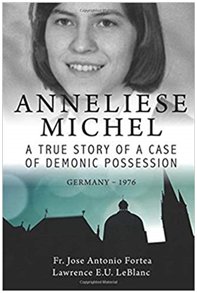 On March 30, 1978, the trial began in the district court of Aschaffenburg Germany, of Josef and Anna Michel and Father Arnold Renz and Father Ernst Alt. The four were charged with negligent homicide in the death of Anneliese Michel. The courtroom sitting area was occupied primarily by media persons from Germany and abroad. Anneliese, her family, a few close friends, and the two priests involved and their Bishop, all believed that Anneliese suffered from possession. At the time, it was the first official and public case of exorcism in Germany in approximately fifty years, and the only known case to have been recorded on audio tapes. After sixty-seven exorcism sessions, Anneliese died on July 1, 1976 of what appeared to be starvation....

When Judge Bohlender read the courts verdict on April 21, 1978, the medical expert's opinions provided by the prosecution had been accepted in its entirety. Those involved could not have known the epilepsy had evolved into a psychosis. In May 1976, at the latest, Anneliese no longer had the ability to determine and deal with her own well-being. The exorcism sessions aggravated her condition. The defendants should have sought medical help. The court said, had Anneliese been given medical treatment, perhaps force fed even a week before her death her life could have been saved. The sentence therefore states that medical attention must have been sought even though they were convinced the problem was spiritual. This means that any doctor, psychiatrist or perhaps state employee who considered that an exorcism is injurious to one's health may legally intervene and take over such a case.

One of Anneliese's sister's testified that Anneliese made it clear that she did not want to be sent to a mental institution where she would be sedated and force fed.

All four defendants were sentenced to six months in prison, which was suspended, with three years' probation. Father Alt was fined 4800 deutschmarks, and Father Renz 3600 deutschmarks. They were also responsible for court costs. The four accused initially appealed the court's decision. After reflecting on the whole process, partly due to financial reasons and partly due to the fact that all involved had no confidence that a fair court decision could be reached, they decided to withdraw their appeal. It should be noted that the court costs for the priests were incurred by the Diocese of Wurzburg. Had the courts' decision been appealed, the priests would have been responsible for any additional legal costs. All the files relating to this court case and the diocesan files related to this story are not presently available to the public.

One should not be shocked by the fact the court came to the verdict it did or that the public had such distain for the defendants. Where judgments are made by the courts on controversial matters the defendants are often supported by the public. Here the parents and the two accused priests were under terrible pressure, as the Law, the Church, the media, and public opinion were for the most part all against them.

Anneliese, her family, Peter, the Heins, the priests and their Bishop, all believed that medical and psychological remedies had proven unsuccessful. They also believed Anneliese's condition ultimately met the criteria of possession. After much time, consultation and several requests to the Bishop, permission was granted to begin the exorcism prayers. In a modern world where religious beliefs have become marginalized, where within the Catholic Church many of its long held truths have come under attack from inside and outside its doors, there should be little doubt that the opinions of what really happened to Anneliese Michel would be divided. For those who do not believe in God, demons do not exist, and this makes exorcism an event for medieval history. Although a detailed psychiatric evaluation of Anneliese was never performed, epilepsy and psychological illness were plausible causes for a person suffering some of the symptoms Anneliese exhibited.

There were however, many things that could not be explained by this diagnosis. For those who believe in God and the New Testament, possession is a plausible cause for Anneliese's suffering. It is clear that Anneliese, those close to her and several priests familiar with her case, all believed she suffered from possession, that her faith in God and the Catholic Church was not in question, and more importantly, she suffered tremendously and offered these sufferings up to her Savior....

Considering the field of mental pathologies and acknowledging the existence of the spiritual world, when we became familiar with the circumstances surrounding this case, the authors were able to state beyond a reasonable doubt that Anneliese did not suffer from mental illness. What we see in her behavior comes not from a state of mental illness, but from the demonic possession she was suffering. The depression she endured was the normal consequence of the situation in which she lived. During the last part of her life, she suffered from a compulsion which was caused by the influence of the demons on her mind. This was manifested through the repetition of pious acts such as genuflections and prayers. This was part of the cross which God permitted.

Anneliese suffered physically, mentally and spiritually. She suffered the physical effects of seizure or seizure-like symptoms, brief periods of unconsciousness, and the inability at times to eat, sleep, walk and speak. There were depression-like symptoms which became constant. At times her spiritual desires to pray, go to confession, go to mass and receive Holy Communion were interfered with or not permitted. She suffered because no one seemed able to help her situation, except through prayer, which gave her varying degrees of relief. She suffered the dread of demonic faces and other associated afflictions that she experienced in this regard. Drawing on her faith, she accepted these sufferings and offered them to God in expiation for the sins of others. She continued to live her life in a heroic manner despite these formidable challenges. Apart from these afflictions, she appeared to live and function as a happy, normal person.

In the midst of these sufferings, her family and priests believed Anneliese received divine consolations in the form of locutions and that she felt the presence of Jesus, Mary, various saints, and several deceased relatives. Anneliese subsequently received visions of Jesus and Mary, such as the one described by Anna Michel and Thea Hein in which Mary appeared to her and asked if she was willing to offer her sufferings to God.

Anneliese, her family, Peter, the Heins, Father Renz, Father Alt, Father Rodewyk, Bishop Stangl, and several other priests who were familiar with this case, believed that Anneliese suffered from possession. As a result, the only remedy to alleviate Anneliese's condition was to pray the prayers of exorcism. They believed the exorcism prayers would eventually be successful and Anneliese would be liberated. If the exorcism had been successful, perhaps only the family, friends and priests would have come to know of the events pertaining to Anneliese's life. Anneliese seems to have come to the conclusion in April or May 1976 that her offering may include giving up her life. When asked why they would not leave, the demons repeatedly responded that they were not permitted to do so. Since Anneliese offered her sufferings to God and died on July 1, 1976, as she foretold as being the date of the resolution to her condition, one may speculate that God permitted this to happen.

Since these events may be regarded from a spiritual perspective as a way of participating in Christ's sufferings, the death of Anneliese was by no means a failure of exorcism. It has to be understood in the same way as Christ's death. What may be seen, in the eyes of the world, as a failure, may actually be success in the eyes of God. Anneliese did everything she could to extricate the tyranny of the demons, and the priests did everything they could to free her of them. So why would God permit her to die? As an expiatory sacrifice?

The idea that sufferings offered with love, resignation and patience have salvific value, is central to Christian Theology. These sufferings become graces for the salvation of others. The sacrifice on the Cross two thousand years ago cannot be understood without this concept of expiation. In this new German version of Calvary everyone did what they thought was best, but God accepted the sacrifice permitting Anneliese's death.

God permitted the demons to stop Anneliese from eating in the same way as throughout history He allowed executioners to accomplish the martyrdom of their victims, even though they prayed and asked for their liberation from their captives. The Michels and the two priests suffered tremendously following Anneliese's death and the verdict of the court. In some ways, they suffered for the rest of their lives with the terrible burden of being surrounded by people who considered them guilty in spite of knowing in good conscience they did the best they could for Anneliese. This sentence was for life.

This whole affair had another consequence. It effectively stopped exorcisms in Germany. Although exorcisms were not a common occurrence in Germany at the time, after this bitter event it seemed that no Bishop wanted to have anything to do with the power to dismiss demons, which was granted by Jesus to His Apostles. Rarely had such an event affected the Church so adversely in one country.