The following is a brief interview with Catholic author, radio host and evangelist Jesse Romero. Below the interview is an excerpt from Romeros latest book, A Catholic Vote for Trump: The Only Choice in 2020 for Republicans, Democrats, and Independents Alike, published by TAN Books. Click here to order a copy of the book directly from the publisher.

What inspired you to write this book?

JR: What inspired me to write this book is the constant disinformation by much of the mainstream media, especially the Hispanic media, which has no conservative mainstream outlet. I know the Catholic vote and the Latino vote are going to be the game changers in the 2020 election; that is what motivated me and John [McCullough]. We did not want to sit on the sidelines. The left has influenced Hispanic media and Catholic prelates as well. I felt a moral obligation to my fellow Catholics, Latinos, and people of good will to provide some moral clarity and demonstrate that President Trump is the right man for these times.

Why do you think the Trump presidency is so polarizing, even among Catholics?

JR: People are not use to seeing a Republican president defend himself, especially against the oligarchs – the mainstream media, globalists, academia, Hollywood, Democrats, socialists, communists, Planned Parenthood, and so on. The establishment media runs a constant anti-Trump narrative; this is why so many low-hanging fruit Catholics are easy pickings for the propaganda spin machine. The mainstream media is the bully pulpit and mouthpiece of the Democrat Party. Catholics who practice their faith are usually more aware of the culture of death and the culture wars; they support this president. Catholics who don't practice their faith generally vote for liberal Democrats. The spin machine (the mainstream media and the Democrats) runs their lies and half-truths everyday around the clock. If you repeat a lie over and over again, it starts becoming the truth to the weak-minded person whos not properly formed in conservative Christian thought.

As a Latino Catholic, do you consider Trumps position on illegal immigration controversial or contrary to Catholic teaching?

JR: President Trumps position on legal and illegal immigration is identical to the Churchs teaching in the Catechism of the Catholic Church (paragraph 2241) and St. Thomas Aquinas, the Churchs greatest theologian. The majority of Hispanic Americans totally support President Trumps immigration policies. My chapter on this issue is titled One Mexican American Catholics Thoughts on Legal versus Illegal Immigration.

How should pro-Trump Catholics respond to those (Catholic and non-Catholic) who display utter contempt for the president?

JR: Speak the truth in charity (Ephesians 4:15). Give them the facts on President Trump's promises and accomplishments. You can argue with my opinions, but you can't argue with facts (my book is fact-filled). President Trump works for free, doesn't take a paycheck, works well over eight hours a day and is donating his check right now to the Coronavirus Task Force. President Trump is not right versus left; hes a pragmatist. He sees a problem and fixes it. His Make America Great Again slogan made this economy the envy of the world. He gave us the greatest economy in the last 60 years before we were hit with the Chinese Communist Wuhan virus. Hes a blue-collar billionaire who doesn't represent Wall Street; he represents the forgotten man from Main Street.

How do you think the COVID-19 pandemic will affect Trumps chances for reelection?

JR: Americans with common sense know in their hearts that President Trump is uniquely qualified  as he has demonstrated – to reboot this economy to where it was. Hes a businessman, not a politician. His enemies certainly did not let a good crisis go to waste (to paraphrase Rahm Emanuel, former Obama staffer). Theyre following Bill Mahers playbook.

From the introduction to A Catholic Vote for Trump 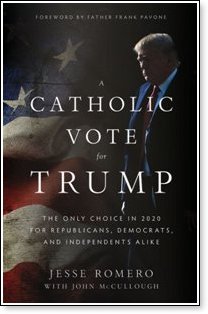 The 2016 election was a critical one for Catholics in the United States of America. Practicing Catholics know that the Democrats stand on social issues like abortion has been at odds with Church teaching and basic morality for a long time. Hence, there has been a gradual migration of many from the political party of their forefathers as they could not reconcile the conflict.

However, many Catholics, and practically all of them in high public office, have chosen to compromise their supposed or professed moral beliefs in order to continue to support the party that their family has always supported. They rationalized that disconnect for many years by their native disagreement with the Republicans on economic issues and by taking refuge in the personally opposed but dont want to impose my morality dodge. (We say dodge because all law is an imposition of morality on someone who may disagree. If we want to drive one hundred miles per hour in a school zone, society imposes its morality on us.)

Sadly, over the course of time, many people came to prioritize their identity as Democrats over their identity as Catholics. Tragically, that loyalty to the Democratic Party has been the solvent in which the faith lives of innumerable Catholics, many prominent politicians among them, have dissolved.

One thing that changed with the 2016 election is the Democrats increasingly obvious embrace of the most radical expressions of things with which most Catholics, to say nothing of other people of good will, are at the very least uncomfortable. The mask is off for all to see. In truth, it has been for some time, but there seems to be an increased urgency among the Democrats to make anyone with the slightest vestigial attachment to traditional Christian morality uncomfortable.

One could say that those controlling the donkey party became radicalized slowly at first, and then all of a sudden. Witness how quickly the change in the view of normative human sexuality has occurred. It seems like just yesterday that civil unionsnot gay marriage mind you, civil unionswere being hotly debated in places like Massachusetts and Vermont.

But it is not just that they are crazy. That would be merely humorous if their craziness did not have such tragic consequences and did not affect our lives. What, one wonders, caused so many old-school Catholic labor Democrats to vote for Trump in 2016 and probably will, and certainly should, cause many more, including Hispanics, to do so in 2020? Catholic Democrats got woke. That is what happened. Not woke in the normal parlance of that cool new term (look it up if you have to), but they woke up to the craziness of the Democrats at the national level as reflected in the truly evil nature of their views on life issues and the increasingly totalitarian nature of their views vis-à-vis religious freedom.

In addition to the absolute hostility of the Democrat leadership to traditional Christianity, many Catholic Democrats also woke up to the fact that Donald Trump is, in fact, closer to their beliefs on economic matters and foreign policy than anyone that either party would put forward from their establishments. Donald Trump was and is the Republican candidate who, in a sense, gave them permission to leave the reservation.