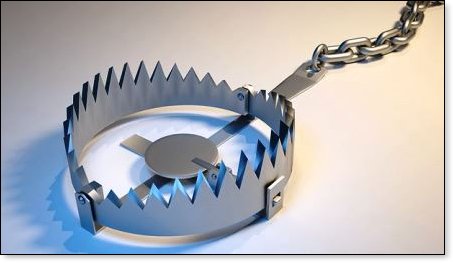 “And the great dragon was thrown down, the serpent of old who is called the devil and Satan, who deceives the whole world; he was thrown down to the earth, and his angels were thrown down with him” (Rev 12:9 NASB).

As the world plunges toward the last few years of time as we know it, the ruler of the cosmos (the world) sets the greatest trap of all time. It is a Bible prophecy that cannot be altered or dismissed—it is pre-written history.

It has many facets, and it is laid on everyone in the last days, saints, and sinners alike. Many who trust in God will escape, but the deception will be quite effective to draw in unbelievers, scoffers, and fence straddlers, by the billions.

Modern men have decided they are “woke,” and in some perverted sort of way, they are right!

With a bit of knowledge and a whole lot of pride, today's worldly woke have signed on the dotted line.

Every challenge, every disease, every issue ranging from keeping the planet green to establishing colonies in space is possible and underway. Even God must be shuffled out of the way, so as not to hinder the progress of man.

The idea that all enlightenment is sacrosanct remains a serious error. Some light is what Christ called dark light.

“But if thine eye be evil, thy whole body shall be full of darkness. If therefore the light that is in thee be darkness, how great is that darkness!” (Mt 6:23).

So, exactly what is the real nature of wokeism and how can its facets all be identified as the very snares of the devil? And why is it, the deception that spares no one?

The strides in technology are almost overwhelming. The days of TV in full color has given way to electronic miracles and digital wonders.

But according to those at the helm of the mighty silicon saturation, there is a warning—our privacy is the price of its success.

According to tech prognosticators, and the Bible alike, the business of business will soon be all digital and open to those who control the data bases—or the single database of the world’s entire economy.

This is all leading to the idea that soon cash, checks, and money orders are going the way of the dinosaurs. Digital currency, vaccine passports, microchips, and a social credit system will soon be worldwide. From Prophecy News Watch comes this article titled The Currency Reset Is Coming – 90% Of Nations Planning Digital Currency.

The world’s last dictator we refer to as the “Antichrist” uses the economy, rather than military might, to sweep the world into a singular economic system.

Digital currency is just what the doctor ordered to implement this change.

“And he causeth all, both small and great, rich and poor, free and bond, to receive a mark in their right hand, or in their foreheads: And that no man might buy or sell, save he that had the mark, or the name of the beast, or the number of his name” (Rev 13:16-17).

Receiving the mark will be painless, convenient, easy, and popular— ut it is also deadly.

The strong cry for inclusion and diversity has broken down the barriers between many people and groups, but has it?

We like to think that people can learn to live together, but forcing people together never works—the keyword here is learn which after all is a process not a mandate.

The great last days social experiment fails miserably according to the prophet Daniel.

“And whereas thou sawest iron mixed with miry clay, they shall mingle themselves with the seed of men: but they shall not cleave one to another, even as iron is not mixed with clay” (Da 2:43).

We may not like the adage about birds of a feather, but pigeons still don’t hang out with the eagles.

One world religion is getting closer with the opening of the Abrahamic Family House. According the forhumanfraternity website, “The Abrahamic Family House will be a beacon of mutual understanding, harmonious coexistence, and peace among people of faith and goodwill. It consists of a mosque, church, synagogue, and educational center to be built on Saadiyat Island, the cultural heart of Abu Dhabi in the United Arab Emirates.”

In the west, the Pope is cozying up to the Islamic faith and similar religions.

The Antichrist also fits into this last day’s penchant, because when these efforts are fully realized, he cuts them all off with a single blow. He intends to become the only person or thing worshipped on the entire globe.

“Let no man deceive you by any means: for that day shall not come, except there come a falling away first, and that man of sin be revealed, the son of perdition; Who opposeth and exalteth himself above all that is called God, or that is worshipped; so that he as God sitteth in the temple of God, showing himself that he is God” (2 Th 2:3-4).

The price for refusing to make Antichrist the center of your life is your life.

“And I saw thrones, and they sat upon them, and judgment was given unto them: and I saw the souls of them that were beheaded for the witness of Jesus, and for the word of God, and which had not worshipped the beast, neither his image, neither had received his mark upon their foreheads, or in their hands; and they lived and reigned with Christ a thousand years” (Rev 20:4).

There will always be a plethora of religions in this confused world, but there will also be only one Savior who laid down his life for the sins of the world.