July 11, 2013
Very few people look forward to going to the doctor. Even fewer look forward to being a patient in a hospital. Some people have an irrational fear of hospitals. This is not a good thing. On the other hand, having a rational fear of hospitals these days is not only a good thing, it is a necessity given the high level of lust and desire for the speedy acquisition of vital organs that drives the transplantation industry. A case in point: the near (true) death of Colleen Burns.

According to the Syracuse Post-Standard, in October 2009, Colleen S. Burns, 41, was taken to the emergency room at St. Joseph's Hospital Health Center for assistance after suffering a drug overdose. The ER nurse who attended Burns reported to the doctors that the patient was recovering from the overdose, but the same physicians insisted that Burns was dead, and pronounced her so, making her "dead" for legal purposes and an eligible candidate for organ transplantation.

A call was placed to Colleen's family members informing them that she had passed away, and a pitch was made for organ retrievable. The still grieving family subsequently agreed to the withdrawal of life support and the harvesting of Colleen's vital organs for transplantation into waiting recipients.

The problem, of course, was that Colleen Burns, like all vital organ transplant donors, was not truly dead, because you can't retrieve healthy vital organs from a cadaver. In fact, all the evidence pointed to the fact that Colleen Burns was alive. When a nurse performed a mandatory reflex test on Colleen Burns, her toes curled downward. She was successfully breathing on her own, independent of a hospital respirator. And her lips and tongue were said to have moved moments before the transplant physician prepared to cleave her chest in two and begin extracting her vital organs.

At this point, one would think the transplant physician would have called for immediate aid for the donor, but instead, he ordered the attending nurse to administer a powerful sedative, so he could continue his mission, which was obviously to get at Burn's organs. The nurse complied, more interested in keeping her job than preventing the murder of a patient, but then, in her heart of hearts, the nurse always knew that you can't get viable organs from a corpse and that the organ donors to whom she administered the sedative were not "quite" dead. Hence the need to give donor patients paralyzing/anesthetic drugs to make sure they do not move while they are being hacked in two, at which point they are truly dead.

Happily, by an act of God, Colleen Burns awoke moments before the physician had truly done her in. On the other hand, one can almost hear the groans in the operating theater .... "Damn it...we were so close... all that money... ."

A federal report from the Centers for Medicare and Medicaid Services indicated that despite the incredible circumstances surrounding the Burns' Case an intensive objective peer review and root cause analysis of the case was not immediately carried out by the hospital's quality assurance program until prompted by the Department of Health. After all, the whole transplantation team and their system supporters were just following the law.

"They were just kind of shocked themselves," Burns' mother, Lucille Kuss, told the newspaper reporter when asked how her daughter's doctor responded to the morbid mistake. "It came as a surprise to them as well," Kuss said.

Perhaps the doctors were sincere in their shock. An incomplete murder where the victim lives and doesn't die is indeed a troubling thing for the perpetrator.

In the end, St. Joseph's Hospital, sponsored by the Sisters of St. Francis, was sanctioned for its actions and cited for a number of "mistakes" that placed Burns' health in jeopardy. However, the fine levied against the medical center was set an incredibly low rate of only $6,000. (News account stated $22,000, but $16,000 was not related directly to this patient.) Neither Burns nor her family decided to sue. That's too bad, not from a monetary point of view, but because a lawsuit would have alerted the largely clueless American population to the harsh realities of the vital organ transplantation industry.

Instead, St. Joseph's administrators were able to get by with just cliché after cliché – "our goal is to provide the highest quality of care to every patient, every time. ... These policies were followed in this case, which was complicated in terms of care and diagnosis. ... We've learned from this experience and have modified our policies to include the type of unusual circumstance presented in this case. ... blah, blah, blah."

According to one consumer advocate interviewed by The Post Standard, "There is currently no accurate way of knowing how often cases like the Burns Case happen because there is no centralized system for collecting information on hospital errors."

One important question which the Syracuse newspaper neither asked nor answered, was why it took so long for the public to learn the details of the Burns' Case.

Unfortunately, the Burns' case is not an entirely isolated one.

In reality, what happened to Burns was not a series of "medical errors." Rather, the case was one of continuing falsehoods perpetrated by the organ donor industry.

So-called "brain death" or "cardiac/circulatory death" are terms concocted by transplant physicians and their allies who wanted to enlarge the donor pool by including patients who are really not dead in the traditional sense of the word.

The difference between an error and a lie or falsehood can be understood by this simple analogy: If I am aiming at the bulls-eye of a target and miss my shot, I can correct and readjust my aim and try again. If on the other hand, instead of aiming at the target, I turn my back on the target and shoot in the opposite direction, this is not an error, it's a false act, an obvious lie, as I clearly have no intension of hitting the target.

Transplant physicians know, and some will readily admit, that "brain death" is not true death. When a donor awakes before the doctor has, by his act of cleaving the chest open, actually killed the patient, this simply means the taking of organs was not quick enough. No error occurred; the donor to be was always living. If the organs would have been cut out, it would have been a deliberate case of legalized murder – a lethal lie told to the donor/patient and his family and to the society that legally approves of such a barbaric act.

My study of organ transplantation began in 1975, with a case involving a newborn named Joseph, who was my patient in the Neonatal Intensive Care unit at Cardinal Glennon Children's Medical Center in St. Louis, MO.

Repeated recordings of Joseph's brain waves were flat, and were interpreted as being "consistent with cerebral death." Nevertheless I continued treatment on the tiny patient. Joseph was eventually weaned from the ventilator and left the hospital with his parents. When he came of age, he went to school where he excelled academically. Later he married and went on to have a beautiful family of three children of his own.

It was because of my experience with Joseph that I began research into the medical myth of "brain death" and related topics.

I learned that the first heart transplantation was carried out in South Africa on December 3, 1967. Three days later, a second heart transplant was conducted in Brooklyn, New York. The latter case involved the cutting out of a beating heart taken from a live three-day-old baby and transplanted into an eighteen-day-old baby. Both babies were alive the morning of the transplantation procedures and both were dead at the end of the day. 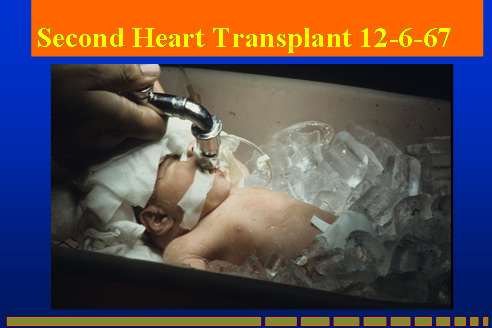 I realized, at that point, that these transplants were illegal and immoral.

So who were the people responsible for the redefinition of death to include "brain death?" For the answer to this question I had to turn to Harvard Medical School where the quest for obtaining more organ donors was underway.

The Harvard Committee faced a quandary. The medical community needed fresh human organs for transplantation purposes. Where could they obtain such healthy organs? Obviously, one could not get healthy organs from a corpse. The only alternative was to redefine death to include human beings who were very ill but not "quite" dead. As with the Burns' case, the final decision to define a potential donor as "dead" or "brain dead" belonged to the attending physician. If he said you were dead, you were legally dead, even though you were in fact alive by all traditional standards.

This is how the transplant industry which is fueled by profit motives and false propaganda got a new enlarged supply of potential donors including teenagers.

Today, every state has Declaration of Death Statutes that serve as transplant regulations and laws, which recognize the lie of "brain death," as true criteria for death.

Then there other laws like the Uniform Anatomical Gift Act (UAGA) that has been passed in 45 states. The UAGA presumes that everyone intends to be an organ donor and has consented to everything that can be done, even if harmful, to get the organs. A Living Will can be overridden to get vital organs for transplantations.

Most Americans do not understand how the procurement system for obtaining fresh vital organs from living human beings actually works.

They do not understand that Federal laws mandate that doctors and hospital staff alert organ donor agencies when a brain-injured patient on a ventilator has arrived at the hospital. All the patient's personal medical records are sent to the Organ Procurement Organization (OPO). No permission or consent is needed from the potential donor or any relative. All the information is in the hands of government officials who are in league with the organ transplant industry.

Colleen Burns was declared dead because she was worth more to the hospital dead than alive, as a potential organ donor. It is that simple.

People Who Have Recovered From "Brain Death":

The dubious nature of "brain death" as a criterion to select persons for organ donation, is demonstrated by the recovery of "brain dead" patients, including the following:

If you do not have a vital donor organ opt-out card,* perhaps the Burns Case will motivate you to get one and keep it on your person along with your SS card and driver's license. The life you save may be your own.

*Opt Out Cards can be obtained by contacting www.lifeguardianfoundation.org

For more information about the truth of organ transplantation, see www.renewamerica/columns/Byrne and www.lifeguardianfoundation.org.