Paul A. Byrne, M.D.
Jahi is alive - praise the Lord and pass the ammunition

May 21, 2015
Jahi McMath is a 14-year-old girl who was 13 when a death certificate was issued for her by the coroner in Oakland, California.

Recently, I visited Jahi and her family in her home in New Jersey. Let's review recent events in Jahi's life.

Jahi underwent extensive tonsillectomy surgery on May 9, 2013, in Children's Hospital Research Center of Oakland. After the surgery, Jahi continued to bleed until she stopped breathing. Jahi was resuscitated and placed on a ventilator. Doctors at Oakland Children's Hospital declared from their examination, that Jahi met criteria for "brain death." Note that quotation marks surround "brain death" to indicate that that these two nouns together are not indication of true death.

Three separate apnea tests were conducted on Jahi. Each time Jahi's life supporting ventilator was taken away for 10 minutes. Each time this caused carbon dioxide and acids to build up in Jahi's brain and body. These tests did nothing to help Jahi and very likely resulted in further swelling and damage to Jahi's brain. Yes. The doctors suffocated Jahi for 30 minutes as part of their declarations of "brain death." 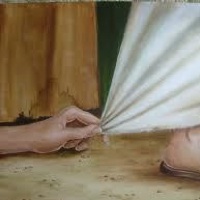 Everyone should understand that this dangerous test can only harm or even cause death of a patient. The apnea test is not beneficial for the patient. (Incidentally, the apnea test is very different from the test for sleep apnea.) Jahi's mother, like the public in general, was given no information about the risks of the apnea tests.

When a ventilator is needed for a prolonged period of time, a tracheostomy is required. Doctors at Oakland Children's Hospital refused to do the tracheostomy. Jahi was transferred to a hospital in New Jersey where the life preserving tracheostomy and gastrostomy were done to make it easier to aid Jahi's breathing and for her to receive nutrition. Jahi was without nutrition from the day of her surgery, December 9, 2013, until after the gastrostomy on January 8, 2014. Jahi was without food for one month! She was starved for one month!

Jahi's heart has continued to beat on its own more than 60 million times since she was declared "brain dead." The doctors in Oakland Children's Hospital further declared that Jahi's heart would stop beating and that she would otherwise deteriorate. These predictions have not occurred. After the declaration of "brain death," the doctors and nurses referred to Jahi as "a dead body" and would not call her by her name. Jahi has been alive since her conception within her mother, and she remains alive today.

Recently I visited Jahi in her home. Jahi is beautiful. The day that I visited Jahi she had on lip gloss like many teenagers. A picture of Jahi's hand joined with my hand is enclosed. Wristbands on both of us state "Jahi is alive" and "Prayer works." 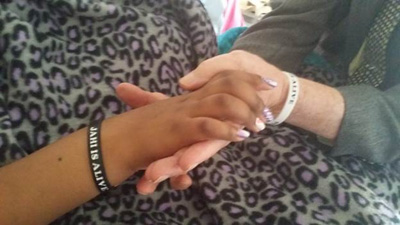 "Brain death" is not true death. Everyone declared "brain dead" has a beating heart, circulation, respiration and mutually interacting heart, liver, kidneys, intestine, salt and water balance, self-controlled body temperature and thousands of actions and reactions that can occur only in someone who is living and never in a cadaver. Healing continues in Jahi, like all living patients declared "brain dead."

Some claimed more than a year ago that Jahi's soul had separated from her. This was false and gravely misleading. When will those who mistakenly have declared Jahi "brain dead," have sufficient integrity to retract their misleading statements about Jahi?