Alan Caruba
Taking away your choice

October 25, 2009
I am always amazed at the variety of choice that exists in my local supermarket. There are other supermarkets in the area, but the one I frequent most has lower prices on most items and almost anything you want to purchase allows one to select among several brands available.

We Americans may not think much about choice when it comes to what we buy because we have so many choices. It is the mark of a free marketplace where competition determines winners and losers. It says a lot about a society that puts a high premium on freedom. 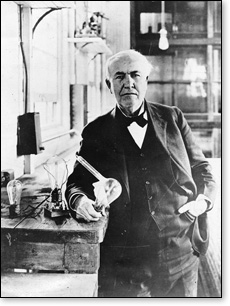 Your government, however, has decided that, in 2012, you can no longer choose to purchase and use Thomas Edison's iconic invention, the 100 watt incandescent light bulb. By 2014, all such bulbs will be banned from sale. That's right, they will vanish from the shelves of supermarkets and other outlets.

As this is being written, your government is debating taking away your choice to purchase health insurance. Or not. If it gets its way, everyone, old and young, healthy or ill, everyone will have to buy health insurance  most likely the brand issued by the government because it will drive most present insurance companies out of business. That is so un-American as to defy belief.

In Europe, thanks to a European Union ban on incandescent light bulbs, consumers are cleaning out the shelves to stockpile a supply when they can no longer be sold. As Jason Lomberg, the Technical Editor of Electronic Component News, a trade publication, noted recently, "The ban has proved to be massively unpopular. All across Europe its media are reporting huge increases in the sales of incandescent sales. In Germany alone, sales for 100 watt bulbs rose by 80% to 150%.

Why were the EU and U.S. bans put in place? It is the view of environmentalists who insist that incandescent bulbs are less energy "efficient" than compact fluorescent light bulbs (CFLs) and that consumers must be denied the choice between them.

They are less "efficient," but it is equally true that CFL's unnatural, bluish light takes time to achieve full brightness, about three minutes on the average. At least a quarter of them fall short meeting their rated service life, meaning you will have to buy more of them.

In addition to the fact that some "emit a headache-inducing buzzing sound" the worst thing about fluorescent light bulbs is that they contain mercury. As a recent issue of The DeWeese Report points out, they "contain poisonous liquid mercury over 300 times the EPA's standard accepted safety level."

"In addition, days after a bulb has been broken," noted Tom DeWeese, "vacuuming or simply crawling across the carpeted floor where the bulb was broken can cause mercury vapor levels to shoot back upwards of 100 times the accepted level of safety." Who crawls on the floor? Babies! Whose closer to the floor than you? Pets!

The Maine Department of Environmental Protection reported that a woman was quoted $2,000 for cleanup of a broken compact fluorescent bulb in her house.

The politicians in the U.S. Congress, pandering as always to the crazed environmentalists, enacted the Energy Independence and Security Act of 2007 that put the ban in place to begin in 2012.

The Obama administration has declared war on the building of new coal-fired energy plants despite the fact that they currently provide just over half of all the electricity we use daily, nor has a new nuclear plant been built in decades. It won't allow any offshore exploration and extraction of oil or natural gas either. So, while allegedly providing for "energy independence" the government is thwarting any new provision of electricity.

But you will be forced to buy fluorescent light bulbs to ensure "energy efficiency" while one of the greatest inventions, the incandescent light bulb, is banned from use. The result will turn all U.S. landfills into toxic dumps.

Where the government finds the justification for destroying your right of choice continues to elude my grasp.

What it portends are supermarkets with far less products and food choices than currently exist because some environmentalist or vegetarian has decided that coercive laws are the best way to take away the freedom of choice that is quintessentially American.

This ban must be repealed along with so-called healthcare "reform" and the hideous "cap-and-trade" law, renamed as the "American Clean Energy and Security Act," that will raise the cost of electricity in the name of saving the Earth from a "global warming" that is NOT happening.

As Pogo said, "We have met the enemy and he is us."