Alan Caruba
Destroying America one environmental law at a time

April 20, 2010
While America maintains the greatest military power in the history of mankind, fearful of another terrorist attack on its soil, it is being destroyed from within by the relentless imposition of laws that defy science and common sense.

Senator Frank Lautenberg (D-NJ) has introduced legislation to "reform" the 34-year-old Toxic Substances Control Act. Americans are hearing a lot about "reform" these days, having just had a healthcare "reform" imposed against the wishes of the vast majority. This bill has the support of the White House, environmentalists, and a suicidal chemical industry.

The chemical industry, like all others in the nation these days, is so fearful of the power of the federal government that it will agree to its own destruction. Thus, Cal Dooley, president of the American Chemistry Council, babbles about being "constructively engaged" in furthering the reform. Reportedly, DuPont, another chemistry giant, called the bill "a good starting point."

The poison is in the dose. 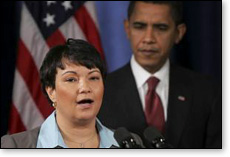 Everything has a level at which it becomes toxic. The proposed legislation would mandate that manufacturers submit health and safety data to the Environmental Protection Agency for 84,000 chemicals in use. The EPA has never met a chemical it has not wanted to ban, particularly if it has a use that is beneficial to human life.

This law has no purpose beyond expanding the authority and power of the EPA, an agency which is currently threatening to regulate carbon dioxide, one of the two gases along with oxygen on which all life on Earth depends!

If you think American companies do not conduct extensive testing of everything they manufacture, you do not know about the huge liability they face if they do not. By way of just one example, pesticide producers spend between $100 and $300 million to test a single new compound before it can be approved and made available either to pest management professionals or consumers.

Dr. Elizabeth Whelan, president of the American Council on Science and Health, addressing the proposed law, said, "It is impossible to prove that something is safe. You cannot scientifically prove a negative. Even water can be dangerous. They say this bill would make it easier for the EPA to ban chemicals that are known hazards. Hazards to whom? Laboratory rats?"

If you feed a laboratory rat enough of anything, it will become ill and even die. The environmentalists, however, subscribe to the "precautionary principle," an idiotic believe that IF anything is believe to pose a threat to health, it must be banned from use. This is the guiding principle of the EPA.

Americans now have the longest life expectancy in the history of the nation. They live a lot longer than laboratory rats. They even recover from life-threatening disease through the use of drugs — medication — and other procedures.

If the EPA gets the power to ban 84,000 chemicals currently in use for a million different legitimate purposes and products, life expectancy will drop like a stone in water.