Alan Caruba
Shut it down

March 1, 2011
With exquisite timing, I sent my passport renewal application to the agency responsible for issuing a new one at precisely the time when the federal government may be shut down over a dispute between a Republican House and the White House regarding U.S. debt and spending. It's not like I am going anywhere and need it, but if I wanted to flee to country, I would be flat out of luck. 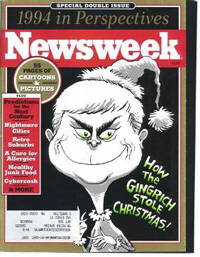 In 1995 there was a famous government shutdown when then-Speaker of the House, Newt Gingrich and former President Bill Clinton locked horns over the Republican demand that some attention be paid to the funding for Medicare, education, the environment and public health.

Today, Medicare's costs continue to imperil the fiscal stability of the nation, a prospect made worse by Obamacare, a so-called repair that managed to add millions more to its roles while taking millions from its funding. Lost in the current discussion of another shutdown is the way the Clinton's "Hillarycare" went down in flames after the public soundly rejected it. Apparently socialists cannot take no for an answer.

The present House Republicans are striving mightily to trim a proposed Obama budget that everyone agrees is detached from reality after the past two years in which the nation's debt has been obscenely increased in the midst of an economic crisis dating back to late 2008. At issue is the need to raise the "debt ceiling," so Treasury can continue to borrow billions every day to keep the government functioning.

In 1995 President Clinton vetoed the spending bill sent to him and thus triggered a shutdown of "non-essential government workers" put on furlough, suspending "non-essential services" from November 14 through November 19 and from December 16 to January 6, 1996.

Speaker Gingrich had the misfortune of the shutdown occurring over the Christmas and New Year's holidays and this was made infamous by a Newsweek cover that blamed him, not the President, for it.

To borrow a phrase from media critic, Bernard Goldberg, the same "slobbering love affair" that the media had with President Clinton has been the hallmark of the first two years of President Obama's administration and policies. Blaming Speaker Gingrich was just too easy for the liberal mainstream media.

It is nothing less than tragic and stupid that we have to revisit 1995 sixteen years after the first shutdown because the issues then are the issues we have now. Except that now the stakes in terms of the nation's financial and economic survival are just so much higher. Republicans in the House knew that then and know that now.

This is everyone's fault because Americans, the voters, have apparently learned nothing in the interim. The borrowing and spending has metastasized to the point where it threatens the foundation of the federal government. For this the blame is shared by both political parties and their leaders.

So, shut it down.

I can wait for my passport renewal. If visitors to our national parks can't get in, well, the bison, elk, and other wildlife will not notice. If folks cannot hike or camp it is a minor inconvenience. Some Washington D.C. museums will be closed. Meanwhile essential services such as our military, national security and law enforcement will continue. Social Security and other entitlement checks will be sent.

The only people rioting these days are privileged public sector union members who are wearing out their welcome. It is unlikely the public will respond any differently now than they did in 1995 which, if I recall, was with indifference.

Indeed, it was a holiday from the federal government and a learning experience as to just how vast it had become. Today it is even larger. And that's the problem.

Simply put, the U.S. does not need a Department of Education that has managed to lower the scores of a generation or two of students squeezed through our schools like so much sausage. It surely no longer needs an Environment Protection Agency that is slowing economic development in every way possible.

What good is a Department of the Interior that denies American companies the opportunity to mine our huge deposits of coal — enough for several hundred years of electricity production — or to drill offshore or in ANWR for billions of barrels of oil and cubic feet of natural gas?

The Department of Health is responsible for administering Obamacare which at this time means issuing thousands of waivers, proof of the sheer idiocy of this legislative nightmare. If you're old and need an organ transplant, go home and die.

In fact, department by department, agency by agency, we can find countless examples of costly programs that duplicate one another, regulators who do not regulate, and the prospect of thousands more to be hired by the Internal Revenue Service.

Shut it down. Let the House sort it out. Cut, cut, cut all the billions and trillions that must either be squeezed from those still holding a job or borrowed from China and Saudi Arabia.

Let the mainstream media howl like mad dogs because they never have and never will understand the logic of a budget that requires the nation to live within its means.

Shut it down. If it brings a scintilla of common sense and fiscal prudence in its wake, I am all for it.