July 8, 2011
Any parent or teacher who has tried to hold a conversation with a self-centered, petulant child or teenager knows how frustrating it is to try to get beyond the "I want it and you won't give it to me" stage. This is the point at which we, the Republican leadership, and others in Congress have arrived with a little boy named Barack Obama. 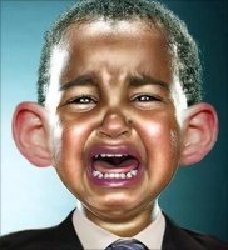 I know he's going to turn fifty soon. I know he is married and the father of two girls. I know that outwardly he is an adult, but the "inner child" of Obama has always been on display because it is also the outer child. No need to tick off the evidence of self-indulgence in a job that provides limousines, helicopters, and jet planes, along with all the other perks for the man in the Oval Office bubble.

This may explain why Obama appears to be so detached from the reality of the current financial crisis. All presidents inherit problems from the previous administration and in 2009 no one is suggesting the financial stability of the nation was not challenged.

Here, though, is the problem. After a failed "stimulus" program, after an obscene increase in the nation's debt, and after the imposition of Obamacare, this president has been in full retreat from virtually every policy he enunciated when taking office. The lone exception has been a relentless attack on the provision of energy to fuel an economy in freefall. The Environmental Protection Agency has become his engine of destruction.

Reality is closing in on President Obama and he still thinks that staged events like his "Twitter" conference will let him escape. Intended to appeal to younger voters, it was impossible to not notice how inarticulate Obama is and how he falls back constantly on trite phrases about "millionaires and billionaires," "corporate jets," and the disparity between the rich, the middle class, and the poor.

His abiding theme has been "fairness," but life is not fair. You don't get to choose to be born into wealth or poverty. You don't get to choose your race. Your family's genetic history may include being prone to cancer or heart attacks. What we can influence, however, is how hard we study in school, whether we choose a vocation or profession, work hard toward acquiring it, and most of all, our attitude about ourselves and others.

The contempt the Boy President feels toward taxpayers is evident in the boldfaced lies he tells about the current tax system, the fact that reducing tax rates actually increases government revenues, and the obvious fact that the federal government is spending too much money.

The nation that delivered itself into his hands was one devoted to profligate spending. In June, the Institute for Truth in Accounting (IFTA) announced the completion of a comprehensive study of all fifty state's assets and liabilities, including pension and retirement obligations.

Founder and CEO of the Institute, Sheila Weinberg, stated that, "If the governors and legislatures had truly balanced each state's budget, no taxpayer's financial burden would exist." This is an issue of truth versus the razzle-dazzle needed to justify the demands from public service unions that have burdened taxpayers.

"A state budget is not balanced if past costs, including those for employee's retirement benefits, are pushed into the future." Only four states, Nebraska, North Dakota, Utah and Wyoming, have assets available to pay their debt and obligations.

The U.S. is, we're told, $14.2 trillion in debt, but this figure likely involves financial obfuscation and is likely far worse if one looks too closely. Others say that the U.S. collects enough revenue to pay off its debts and suggest that the "ceiling," constantly increased over the years, is largely a piece of political theatricality.

When it comes to who actually pays taxes in America, there is ample evidence that, as of April 15th of this year, nearly half of all Americans would have paid no federal income tax because they owed none under the present tax code. Obama's demands for fairness look odd under such circumstances.

According to the Tax Policy Center, a nonpartisan research group, Americans who earn less than $30,000, those who are elderly, and those who are single with children paid no income tax. Not owing federal income tax is not the same as not paying any taxes. Workers are subject to payroll taxes for Social Security and Medicare programs. In addition, they pay a wide range of sales taxes as anyone who has checked their telephone bill or filled up their gas tank can testify. A plethora of hidden taxes cut into the income of even the poorest among us.

The Boy President's demands for more revenues to spend on more federal programs are baseless and his past performance to date has been disastrous.

Fox News analysis and commentator, Brit Hume, recently said, "This President is in as full of a political retreat as this town has seen in many years. He was elected to fix the economy, but people think he and his party have failed and have exploded the nation's debt in the process."

The Republican leadership, if it is to have any hope of defeating him in 2012, must now press its advantage and exact, not just short-term compromises, but major reductions in what passes for a Democrat budget...if such a thing even exists.

In the present crisis, Republicans have as much at stake as the Boy President and, indeed, the entire nation.

Obama, increasingly desperate and spasmodically lying to everyone, needs to be driven from office like Frankenstein fleeing from the villagers with their pitchforks and torches.