September 9, 2011
There will probably never be a definitive calculation of how much money the United States (and other nations) has wasted on Green programs, litigation, grants, research, and projects such as those involving "renewable" or "clean" energy. It will surely add up to several trillion because it has been going on for a very long time through administrations reaching back to Jimmy Carter's and Richard Nixon's. 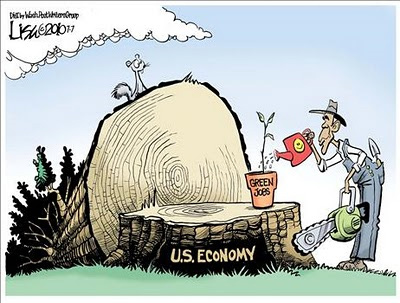 A recent article in Washington Examiner.com revealed the amount of money taxpayers pay out to Green organizations that sue the EPA and other government agencies. In point of fact the EPA encourages such law suits in order to use the court system to affirm regulatory efforts that might otherwise by stopped by Congress.

As this is being written, there are several pieces of proposed legislation in Congress to keep the EPA from utterly and completely destroying the economy and the ability to provide Americans with electricity.

Following an request from Republican Sens. Jim Inhofe of Oklahoma and David Vitter of Louisiana, the Government Accountability Office undertook an investigation regarding the cost of environmental litigation and while it proved daunting, the GAO reported that "the Department of Justice spent at least $43 million from 1998 to 2010 defending the Environmental Protection Agency in court, while the Department of Treasury paid about $14.2 million from 2003 through 2010 to successful plaintiffs for attorney's' fees and associated costs. The EPA paid about $1.4 million from 2006 and 2010 to plaintiffs"

Earlier, in a special report, the Washington Examiner noted that "the major players in the environmental movement are lavishly funded by private contributions from individuals and foundations. And many of them also receive hundreds of millions more dollars in government grants and contracts, so it's not as if these groups are unable to pay their legal legions out of their own coffers."

But no, the taxpayers are stuck with the bill.

The cost of Green "solutions" to non-existant environmental problems is proving particularly evident as reports reveal that "renewable energy" companies rapidly fail when federal subsidies are ended or spent. A case in point was the Senate vote in June to end billions of dollars in subsidites for the U.S. ethanol industry.

Ethanol, also known as "moonshine" had been ordered by the government to be added to every gallon of gasoline consumers use despite the fact that it produces less energy, reducing mileage, and adds to the cost at the pump. It was, of course, another Green lie about reducing "greenhouse gas emissions" said to be the source of a "global warming" that was not occurring. Ethanol producers have been closing their doors in droves now that the tap has been shut off. In a world afloat on billions of barrels of oil, the need for ethanol never existed.

In a similar fashion U.S. manufacturers of solar panels are also closing their doors, sustained initially by U.S. subsidies and loan guarantees. The latest is Solyndra, a California firm that just declared bankruptcy.

President Obama had touted Solyndra as a shining example of Green jobs and technology, offering $535 million in loan guarantees. China, however, has captured much of the market for solar panels. Touted as a way to help reduce electricity costs, left unsaid is that they are expansive to purchase and install. The average homeowner would have to wait ten or twenty years to amortise their investment.

Without similar subsidies and mandates, the wind power industry would rapidly collapse as well.

The impact of Green initiatives and mandates has been particularly onerous at the state level. As I noted in an earlier commentary, "In July, New Jersey Gov. Chris Christie pulled out of the Regional Greenhouse Gas Initiative, a consortium that would have required renewable energy use for the provision of electricity.

In Pennsylvania, Gov. Tom Corbett has been aggressively de-emphasizing renewable energy use and energy conservation. He has shut down the state department of environmental protection's office of energy and technology development.

The President has been touting Green jobs since he took office and, if he does so in the course of his speech to a joint session of Congress, you will know that this Big Green Lie is still part of his continuing failure to address the real causes of unemployment in America, taxation, regulation, and a general assault on the energy industry and others..

Word is that Obama still hasn't installed solar panels on the roof of the White House despite promises to do so. The last President to do that was Jimmy Carter and they were removed by President Reagan.

Green Lies have cost Americans trillions of dollars since the environmental movement began in earnest in the 1970s.

This is written prior to President Obama's address, but if you hear him speak of "Green jobs" or "clean energy" or "renewable energy," feel free to turn the channel to anything else because this is the most duplicitous and incompetent President to ever hold the office.