Alan Caruba
Looking to the dollar, gold, and "Mutti" to save the world

December 8, 2011
The most formidable couple in the world during the 1980s was Ronald Reagan and British Prime Minister Margaret Thatcher. Thatcher, a conservative and a woman of iron will, must be looking across the Channel with some amusement to see how her German counterpart, Chancellor Angela Merkel, is literally the only person keeping the European economy from collapsing and, it must be said, taking England and America with it. 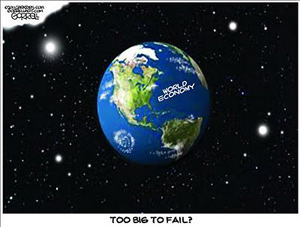 The cover article of this week's Business Week noted that "Merkel is the daughter of a Lutheran pastor. She won a PhD for a thesis on quantum chemistry...though childless, she is known as Mutti, for Mother." Born in the post-war years, "Merkel's worldview reflects the German desire for stability. Chaos plagued the German-speaking people long before there was a German nation...Later the hyperinflation of the 1920s and Depression of the 1930s, both of which undermined the middle-class, gave rise to Nazism."

Plainly said, Angela Merkel is showing the rest of the world why Keynesian economics doesn't work; that governments with huge "entitlement" programs and a tendency to throw vast amounts of money at their problems invite disaster. If Europe does not plunge into chaos, it will be because she refused to bail it out with the deutschmark.

Meanwhile, the Federal Reserve is moving billions to Europe to ease its lending crisis. 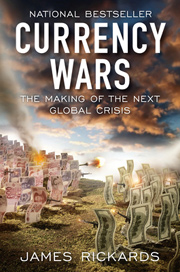 If you read just one book this year, I recommend James Rickards' "Currency Wars: The Making of the Next Global Crisis" ($26.95, Portfolio Penguin). An advisor to the Department of Defense, the U.S. Intelligence community, and major hedge funds on global finance, he brings more than thirty years' experience to a book that explains what has gone so terribly wrong and why.

Rickards spells out how the U.S. economic system has been gamed over the years to ensure that "elites captured most of that growth in income and profits." It is the reason we are just learning that many members of Congress have grown wealthy using insider information, an act that would land anyone else in jail.

"Over time and with increasing complexity, returns on investment in society begin to level off and turn negative...Bureaucracies that started out as efficient organizations turn into inefficient obstacles to improvement more concerned with their own perpetuation than with service to society."

This is a definition of the U.S. Departments of Education, Labor, Housing and Urban Development, Health, and Energy, along with the quintessential monster, the Environmental Protection Agency. For good measure, include Fannie Mae and Freddie Mac, the two mortgage loan agencies.

In a chapter titled "Endgame — Paper, Gold or Chaos?" Rickards looks at the weakness of the U.S. dollar, pointing out that "As the dollar and sterling were trading places in the 1920s and 1930s, there was never a time when at least one was not anchored to gold."

"Gold is not a commodity. Gold is not an investment. Gold is money par excellence. It is truly scarce — all the gold ever produced in history would fit in a cube of twenty meters (about sixty feet) on each side, approximately the size of a small suburban office building."

"Today, under Bernanke's guidance, the United States is trying to do what England did in 1931 — devalue...What is happening instead is that all the major currencies are devaluing against gold at once. The result is global commodity inflation, so that beggar-thy-neighbor has been replaced with beggar-the-world."

Rickards' book is a warning against what we are witnessing. "Perhaps the most likely outcome of the currency wars and the debasement of the dollar is a chaotic, catastrophic collapse of investor confidence resulting in emergency measured by governments to maintain some semblance of a functioning system of money, trade and investment."

The two currency wars of the last century led to two world wars. Rickards warns that "The path of the dollar is unsustainable and therefore the dollar will not be sustained." A return to the gold standard "offers the best chance of stability."

Rickards recommends that the big banks be required to become smaller and that derivatives be banned because "they serve banks and dealers through high fees and poorly understood terms." Derivatives are contracts between two parties that define the value of underlying variables. The "bundling" of mortgages that were then sold as assets is an example and, as the financial crisis revealed, their value was dubious at best, criminal at worst.

"The dollar," says Rickards, "for all its faults and weaknesses, is the pivot of the entire global system of currencies, stocks, bonds, derivatives and investments of all kinds. It is the store of economic value in a nation whose moral values are historically exceptional and therefore a light to the world. The debasement of the dollar cannot proceed without the debasement of those values and that exceptionalism."

The coming national election will be a choice between a President who does not believe the United States of America is exceptional and whoever the Republican Party selects to help the nation return to its fundamental values.