March 12, 2012
In early November 2009 Americans were shocked to learn that an Army psychiatrist, Major Nidal Malik Hasan, had shot and killed twelve soldiers at Fort Hood, Texas, and wounded thirty-one others. Because of the unrelenting political correctness prevailing in the Army and other services, all the signs that Hasan was a ticking time bomb were ignored. 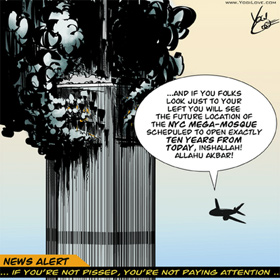 Hasan was known to be a Muslim, had exhibited signs of a growing fanaticism, occasionally showed up in the post exchange dressed in Arab garb, and as it turned out later, was being mentored by Yemen's al Qaeda leader, Anwar al-Awlaki , an American citizen who was later killed by a drone strike. As Hasan stood before the soldiers, firing at them, he yelled "Allah Akbar."

This and other attacks, planned, failed, and thwarted occurred before and since 9/11; an attack that stunned Americans, all contribute to the worldwide terrorism intended to bring about the domination of Islam. Not only has the memory faded, but in 2009 the Obama administration did away with the earlier description of "a war on terrorism," it ordered the Pentagon to replace it with "overseas contingency operations."

The administration's magical thinking about the Islamo-fascist threat makes one wonder why it has a Department of Homeland Security.

When it became known that the New York City Police Department was training its force to be especially watchful for any signs of terrorist attacks and was paying close attention to the mosques in the city and across the river in New Jersey, there was an outcry that totally ignored the threat. Initially they were rebuked by the Governor of New Jersey, a state where the 1993 attack on the Twin Towers was planned. One of the conspirators arrested lived in my hometown!

A report by the NYPD notes that Newark police officers worked closely "at all times" with their New York City counterparts. Much of the criticism of the NYPD's program has been due to its success!

In a new book by Peter Feaman, "The Next Nightmare: How Political Correctness Will Destroy America" ($14.99, Dunham Books, softcover), a trial lawyer with thirty years' experience, warns against the way Americans are leaving themselves vulnerable to future attacks. "Intolerance of Christianity and Judaism, and violence against infidels, is preached weekly in mosques across the United States."

A great deal of the problem is that Americans believe that Islam is a "religion." Historically, it has been a cult of conquest that merges its belief system with a political agenda in which Sharia law is intended to be imposed throughout the world. Its early, swift spread was based on terror and warfare.

"At the end of World War II," notes Feaman, "there were about fifty mosques located in the United States. Today there are more than 1,300 — and the number grows monthly." Much of the funding comes from Saudi Arabia for Sunni mosques and Iran for Shiite mosques.

There are moderate Muslims seeking reform within Islam and there are Muslims who are loyal Americans. They are, however, vastly outnumbered by those with very bad intentions.

The NYPD program aimed at monitoring mosques is critical to thwart future attacks. "The six men of the al Qaeda sleeper cell in Lackawanna, New York — who were arrested by the FBI in 2001 for attending an al Qaeda terrorist training camp in Afghanistan — all belonged to the same Lackawanna mosque."

"In Florida's Dade and Broward Counties, an imam and his two sons were arrested on May 14, 2011, charged with funneling money to the Pakistani Taliban..."

"A Sunni mosque in suburban Beaverton, Oregon was the meeting ground for six members indicted by federal authorities in 2002 for conspiring to provide aid to the Taliban and al Qaeda terrorists."

The Al-Farooq mosque in Brooklyn has been in the public spotlight for more than ten years as a hotbed of Islamic radicalism, sedition, and treason. The imam there, Sheik Omar Abdel-Rahman, was convicted in 1995 of conspiracy to bomb New York City landmarks."

Islamo-fascism is spreading everywhere, but especially in Europe where many acts of terrorism have occurred. By 2050, Muslims will be in control of most European nations by sheer weight of numbers. The "Arab spring" is rapidly becoming the means by which Islamists are gaining control throughout those nations that overthrew their mostly secular dictators.

If we don't want a repeat of the Fort Hood murders — labeled "workplace violence" by the Obama administration — if we don't want another Times Square car bomb that mercifully was disarmed, if we want to be protected against future attacks, we must rid ourselves of the political correctness that will get us killed.

The notion that the New York City Police Department would come under fire for acting preemptively to prevent further attacks in the city is beyond absurd. It is suicidal.