July 26, 2012
Fortunately for America, President Obama's effort to impose a cap-and-trade law on carbon dioxide emission failed in a Democrat controlled Congress that saw how disastrous its impact would have been in a time of economic distress. 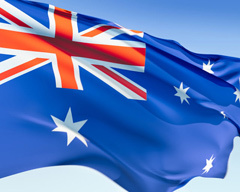 It would have imposed higher costs on everything involving the use of energy and would have done so on the basis of the all the lies about global warming, greenhouse gases, and Obama's anti-energy policies. Using the Environmental Protection Agency, he has been bludgeoning the coal industry and, via the Department of the Interior, thwarting the exploration and extraction of oil on all of the vast land holdings of the federal government.

As I have often noted, there hasn't been any planetary warming since 1998 when Earth began a normal cycle of cooling and carbon dioxide plays no role whatever in either warming or cooling. It is a mere 0.038 percent of the atmosphere.

For several years now I have been watching the destruction of the Australian economy by its elected leaders. David Archibold, a climate scientist and energy analyst based in Perth is a visiting fellow of the Institute of World Politics in Washington, D.C. where he teaches a course in strategic energy policy. On July 1, he gave a speech at an anti-carbon tax rally in Sydney.

"There is no doubt that we are ruled by evil men and evil women who are fully aware of the damage they are doing to our economy, and to the warp and weft of our society, and who seem to be in a manic rush to do as much damage as possible in the time left to them," Archibold told those attending the rally. Sadly, they already knew the truth of this.

An Australia friend of mine recently wrote to say "the Australian carbon dioxide tax — or as our lying government calls it 'price on carbon' — came into effect on July 1, 2012. Already our electricity prices have risen by up to 20%, refrigerant gas gone up 300%. Landfill and tip fees have increased by 30%, food is up. The tax has been imposed on EVERY item we buy in some form or other," adding that "I wouldn't be surprised if you get a similar tax if Obama wins in November. We are slowly destroying our economy."

A word about refrigerant gases; these are required for your home and car air conditioning, your refrigerator, and for a stand alone freezer. Most food items, liquid or solid — particularly meats, poultry and fish — require refrigerated transport. The Australian carbon tax adds thousands of dollars to these costs of operation and affects everyone.

The Greens, whether as part of the United Nations Intergovernmental Panel on Climate Change (IPCC) or as groups in various nations, have done everything they can to thwart energy use, to replace oil, coal and natural gas with the useless, costly "renewable energies" of wind, solar, and biofuels. Humans, they insist, are destroying the Earth, but it is the Greens who are destroy Australia these days.

Australia is a case history of what happens when Greens and those in power join hands to use the instrument of government to destroy a successful nation. As Sam Fielding recently reported in an article on AmericanThinker.com, Australia went from a thriving economy under former Prime Minister John Howard who served from 1996 to 2007, only to elect Kevin Rudd's left-wing Labor Party in 2007. By 2009 "a six year run of budget surpluses gave way to the largest deficits in modern (Australian) politics. His deputy was Julia Gillard who challenged him and won election, promised that "there will be no carbon tax under the government I lead."

If this reminds you of all the promises President Obama made prior to taking office and plunging the U.S. into $17 trillion of debt, it is exactly the kind of duplicity that has ruined Australia when Gillard engineered the controversial tax.

Obama visited Australia in November 2011 and expressed support for the carbon tax saying, "I think that's good for the world...I actually think, over the long term, it's good for our economics as well, because it is my strong belief that industries, utilities, individual consumers — we're all going to have to adapt how we use energy and how we think about carbon."

As is the case of the IPCC, many of Australia's scientists were corrupted. Archibold said, "As a scientist, what saddens me is that most of our scientific institutions have failed in their duty to serve and protect the Australian people" referring to the Commonwealth Scientific and Industrial Research Organization, government bureaus, and the universities — "these have all failed us and sold their souls for a handful of silver."

"The notion of global warming," said Archibold, "was concocted to provide a cloak of scientific respectability for a massive socialist redistribution of wealth." If that sounds like what is happening in America today, you're right.

My Australian friend also took note of a mining tax that has been imposed, not unlike Obama's attacks on the U.S. mining industry. America sits atop enough coal to provide electricity for hundreds of years to come, but it is being systematically destroyed. "Australia is in a world of hurt and all so unnecessary. See what socialist, radical, green, lefty governments bring us?"

Yes, look at Australia and see what lies ahead if Obama is given four more years to complete his destruction of America.