February 6, 2013
"Egypt, the largest Arab state, the second largest recipient of U.S. military aid, and our second most important ally in the Middle East, is now in the hands of a hostile regime – an elected one at that – which we continue to treat as a friendly one," says Raymond Stock in a recent article published by the Middle East Forum. 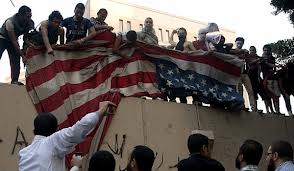 When President Obama gave a speech in Cairo on January 25, 2009, it was portrayed as an outreach to the Middle East and Islam. Seated in the front row at Cairo University, however, was the leadership of the Muslim Brotherhood. The speech asked Muslims to define themselves "not by national or ethnic identity, but by their religion."

What followed was the overthrow of the Mubarak regime and the election of Mohamed Morsi, a leader of the Muslim Brotherhood as president, a victory for its 84-year struggle for power in the land of its birth. How radical is the Muslim Brotherhood? In January on Holocaust Remembrance Day, a key figure in Morsi's government, Fathi Shihab-Eddim, called the Holocaust a hoax cooked up by U.S. intelligence operatives, saying that the six million Jews killed by the Nazis in World War II had simply moved to the U.S.

Such views are widely held by Muslims and reflect Islam's hatred of Jews, but most Americans remain oblivious to the fact that Islam hates Christianity and all other religions. The official policy of the U.S. is to ignore this and to support the Morsi regime. Morsi is on record saying that Jews are "apes and pigs." The 1979 peace treaty between Israel and Egypt is now just an illusion.

To get some insight into life under Islam in Egypt (and elsewhere) some of the fatwas issued in 2012, legal decrees issued by learned Muslims, one called for the destruction of the pyramids and the Sphinx. Another opposed setting a minimum age for marriage in the new constitution, i.e. pedophilia. A fatwa called for scrapping the Camp David accords and another permitted the killing of any anti-Islamization protesters. Greetings to Christians on holidays such as Christmas and Easter were forbidden.

At this writing, the U.S. is shipping the first four of sixteen F-16s promised to Mubarak and giving the Morsi regime two hundred Abrams tanks in the same package. On January 26, Morsi said this was a sign of support for his rule and it is.

Special Operations Speaks, an organization of Special Ops veterans, has spoken out against this weapons transfer noting that "These modern U.S. weapons are part of a package of military aid to Egypt that was concluded in 2010 with the previous Hosni Mubarak regime. The times and our relationship have changed and not for the better," cited the "viciously anti-Semitic and anti-Israel rhetoric of President Morsi and the Muslim Brotherhood" deeming the provision of weapons "liberal foreign policy at its most inept."

The U.S. is not alone, however, it supporting a regime dedicated, along with the rest of Islam, to the destruction of the West. Morsi is expecting a $4.8 billion loan from the International Monetary Fund, plus $5 billion in emergency aid from the European Union. More billions have been pledged by Saudi Arabia and Qatar.

Having failed to reach an agreement with Iraq, the U.S. pulled its troops from that nation which is now wracked with attacks and is, in effect, a close ally of Iran. President Obama has announced the withdrawal of troops from Afghanistan. All the money and military efforts in those nations has come to nothing.

At the same time, al Qaeda has expanded its operations, most recently in Mali, but also throughout Africa, most notably its northern tier known as the Maghreb. An attack in Libya that killed the U.S. ambassador and three others – most notably on the anniversary of 9/11 – resulted in the deliberate deception of the American public, suggesting it was a spontaneous act, the result of a video no one had seen. Neither the President, nor his out-doing Secretary of State has been held responsible for this.

The in-coming Secretary of State, John Kerry, favors "negotiations" with Iran when there has been no evidence since 1979 that anything other than a state of war has existed with that nation. The nominee for Secretary of Defense, Chuck Hagel, displayed an alarming lack of understanding of the threats to our national security or the rise of Islamic terrorism, a reflection of its jihad to impose Islam on the entire world.

Dr. Peter Hammond, the author of "Slavery, Terrorism and Islam: The Historical Roots and Contemporary Threat," pointed out that Islam is not a religion, nor is it a cult. What Americans and others in the West do not grasp is that it is a complete, total, 100% system of life. Islam has religious, legal, political, economic, social and military components, but it is the religious component that masks the other elements of Islam.

It consistently describes itself as "a religion of peace" when it has been the root cause of all the terrorism in the world since the latter part of the last century and marks the new century as one in which a war to destroy it is the only alternative to being destroyed by it.

The President, the son of a Kenyan Muslim and step-son of an Indonesian Muslim, has consistently demonstrated his support for Islam. One of his first acts as President was to call for the closing of Guantanamo where jihadists are interned. He described the enhanced interrogation used to find Osama bin Laden and to deter further acts of terrorism against America as "torture." His first television interview was with Al-Arabia, a Middle East television channel. Obama has announced plans to travel to Israel, the first such trip since his 2008 campaign.

America and the West are feeding the alligator, hoping to be the last to be eaten. We are losing the battle is Islam and, unless this is reversed, we shall end up being its slaves.