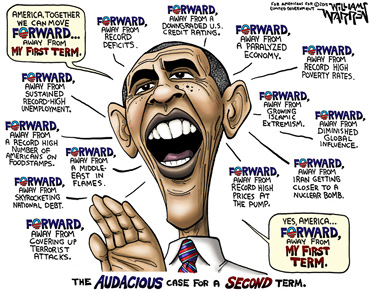 Following the sequester debacle in which Obama and his cohorts were swiftly found to be lying through their teeth, his polling numbers have begun to fall and, folks you ain't seen nothing yet.

As the realities and costs of the Affordable Healthcare Act – Obamacare – kick in, when he leaves office, he will be remembered for inflicting pain and suffering on Americans.

As the various aspects of Obamacare become active, the impact on everyone will reduce their income and increase their costs. In retrospect it will be seen as the largest poison pill any President or political party ever swallowed. Recall that Obamacare was passed December 24, 2009, Christmas Eve, by a straight Democrat party vote, none of whom had even read the legislation.

In January, the author of "Priceless: Curing the Healthcare Crisis," John C. Goodman, wrote of Obamacare's impact on your tax bill. "You will join other Americans in paying more than $500 billion in nineteen new types of taxes and fees over the next decade to fund health reform. Some of the new taxes will be indirect and will be passed on to you in the form of higher prices, higher premiums, or lower wages."

As Americans address paying their 2012 income taxes, here are some of the new taxes that will afflict some or all of them at some point.

# A tax on medical devices. This will cover "everything from surgical instruments and bedpans to wheelchairs and crutches. Even pacemakers and artificial hips and knees are taxes." If Obamacare is not repealed, it will rake in $20 billion over the next decade.

# A tax on drugs. If you think prescription drugs are expensive now, some drug makers have already begun to raise prices.

# A tax on medical savings accounts. You will no longer be able to use these tax-free accounts to purchase over-the-counter drugs, forcing people to purchase drugs such as Claritin, aspirin or Advil at a cost that is 30% higher for a middle-class family. Contributions to such accounts will be capped at $2,500.

# A tax on becoming ill. Today's tax law allows you to deduct medical expenses up to 7.5% of your adjusted gross income. Obamacare increases this to 10%, making your future deductions smaller. It became effective this year for people under 65 years of age and goes into effect in 2017 for those 65 and older. Obama will be out of office by then. He won't care even if you do.

# Additional taxes. The Medicare payroll tax will increase by almost one-third for some people, rising from 2.9% today to 3.8& on wages over $200,000 for an individual and $250,000 for a couple. An additional 3.8% Medical payroll tax will be levied on investment income (capital gains, interest, and dividend income) at some income levels. The "rich" will pay more, but in effect this impacts most of the middle class.

Benjamin Domenech, Managing Editor of Heartland Institute's Health Care News, recently reported that the Congressional Budget Office (CBO) has concluded that "Obamacare is going to be more expensive than the Obama administration thought, disrupt the marketplace more than they thought, and be tougher to implement than they thought."

Recalling that Hillary Clinton was put in charge of similar healthcare changes during her husband's administration where the effort failed, if she were elected in 2016, you can be sure she would retain Obamacare. It can be repealed only if Republicans control both houses of Congress, so the midterm elections in 2014 are critical.

Domenech reported that the CBO has concluded that the insurance exchanges that are part of Obamacare and are supposed to be up and running by next January will cost more than $1 trillion through 2022, a dramatic increase over the original budget forecast of $814 billion. Incredible disruptive, more employees will be dropped from their existing plans and fewer uninsured people will get coverage. With somewhere between 23 and 26 million Americans already out of work, millions more will join their ranks as companies cut their payrolls.

According to the Government Accountability Office (GAO), Obamacare will add $6.2 billion to the federal deficit. Recall that in September 2009 Obama promised that "I will not sign a plan that adds one dime to our deficits – either now or in the future." Sen. Jeff Sessions (R-AL) said, "This is how a country goes broke."

For these and a host of other reasons, people will curse Barack Obama as the full impact of his signature piece of legislation, his primary means of "transforming America" begins to affect Americans, some of whom will either be denied or be unable to afford medical treatment. They will die.

Obama has already transformed America from the world's superpower to a debtor nation whose credit rating has been lowered, whose national defense capabilities have been reduced, and whose governance is guided by the absurd belief that humans cause and control the climate.

Barack Obama has four more years to work his will and future historians will conclude that Americans twice elected a President who hates them and their nation.