Alan Caruba
An hour of darkness. or light!

March 22, 2013
On Saturday, Greens around the world will turn off their lights in a symbolic "Earth Hour" gesture against climate change, the term they adapted in the face of the fact that the Earth has been cooling for seventeen years and is on the cusp of a mini-ice age that will ensure cold weather for many years to come. 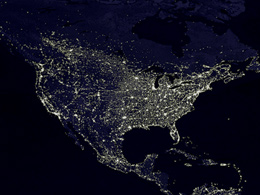 Earth Hour is a protest against the use of electricity – energy – to light our lives in countless ways. Anyone who has gone through an outage as I did in the wake of Hurricane Sandy will tell you that life without electricity is an immediate return to primitive times. Mine lasted a week and included the loss of access to the Internet and the ability to use my computer and every other piece of equipment in the apartment. It was not fun.

We derive electricity from burning coal, from natural gas, from nuclear fission, and from hydroelectricity generated by huge dams. The least amount of electricity we use comes from oil and, in particular from wind and solar, a bare two percent or so. These latter two sources exist only because of government subsidies and mandates. Without these they could not compete against far more affordable and effective sources. Oil, of course, fuels all our vehicles.

What Americans generally have not absorbed is the fact that the large, multi-million dollar funded environmental organizations oppose every form of energy we use. Here is a week's schedule of events planned to lead up to and follow Earth Hour in New Jersey by the Sierra Club chapter.

# On Thursday, March 21, they sponsored a "Fracking Waste Ban Lobby Day" in the state capital of Trenton.

# On Saturday they will sponsor an "adventure aquarium trip" devoted to sea turtles and a lecture on "how our plastic addiction impacts them." We are no more "addicted" to plastic than to oil from which it is produced and found in virtually everything we use. Energy is not the enemy. It is the lifeblood of a successful economy and society.

# On Sunday there will be a town hall meeting about "clean energy solutions" in concert with Climate Mama, 350.org and the Sierra Club with a panel that will discuss how clean energy, solar and wind, "can dramatically reduce our use of fossil fuels and move our state forward without the pollution." It will also discuss how "climate change has impacted you." Americans are not going to reduce the use of fossil fuels, oil, coal, and natural gas. We already enjoy the cleanest air and, more importantly, the Earth in general and America in particular has enormous reserves of these energy reserves.

# On Wednesday, March 27, another panel will engage in "pipeline education," ignoring the fact that America has 170,000 miles of pipelines that transport oil and natural gas throughout the nation. They are safe and secure, but none carry ethanol, a chemical that erodes not only pipelines, but damages the engines of millions of cars and trucks. The pipeline panel will likely take note of the Keystone XL pipeline from Canada that has been delayed for five years now and cleared of any charges of environmental harm.

The Competitive Enterprise Institute suggests that Earth Hour is a good time to celebrate "Human Achievement Hour," a way to debunk the global warming hoax and the nonsense surrounding "climate change," a process that has gone on for billions of years on the planet. The notion that people can do anything about the climate is so absurd it defies the imagination.

Earth Hour is just one more way for the Greens to continue spreading their lies about fossil fuels, plastic, and chemicals they want to demonize despite the advances in health and longevity, the manufacture of products we use, and the extraordinary lifestyle we enjoy with abundant food and protection against the multitude of insect and rodent pests that afflict us, along with the many species of weeds that affect crops.

What Americans should keep in mind during Earth Hour is that we have a White House that has done everything in its power to deprive us of the coal, oil and natural gas that we have at our disposal. It has restricted the exploration and extraction of billions of barrels of oil from offshore of our east and west coasts, and in Alaska. It has generated regulations that have already shut down coal-fired plants and is seeking to impose greater restrictions despite the fact that we have enough coal to keep them operating for hundreds of years.

With more than 1.7 trillion barrels of recoverable oil under our soil, we have enough oil to fuel our present needs for the next 250 years. Delaying the Keystone XL pipeline has deprived the nation of thousands of jobs and will result in $5 billion being spent annually to import oil. Meanwhile, the Obama administration has wasted billions on "clean energy investments."

Americans know their energy bills are increasing as the result of anti-energy policies, know that the energy sector, if allowed to flourish, would provide thousands of jobs, and should know that every drop of oil and cubic foot of natural gas we secure from our own reserves would reduce the cost to everyone in every way.

Turn on your lights at 8:30 PM on Saturday. Turn them all on. Send a message to the White House and to the world that energy is the heartbeat of life and economic growth for America and the world.

Hating energy is another form of hating humanity.