April 3, 2013
I thought it odd that the Republican National Committee would have labeled its analysis of the 2012 campaign loss an "autopsy." The GOP is far from dead and, more importantly, neither is conservatism as a political force in the life of the nation. 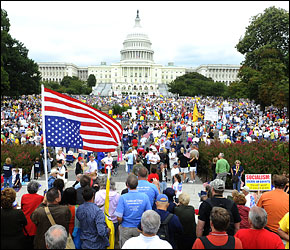 It would be a very serious error for the GOP to abandon its conservative principles just to win an election and, if history is any guide, it does not have to do that. After a term in office, President Obama is already losing the capacity to influence members of his own party and, in general, Congress gives evidence, even in the Democrat controlled Senate, of ignoring him and, with Republicans, fashioning a response to many issues with the exception of the nation's indefensible $17 trillion debt. Democrats remain the "tax and spend" party, but their control of the Senate may end dramatically in 2014.

In 2007 and again in 2009, Democrats regained control of both houses. The 2010 election returned control of the House to Republicans, largely in response to the way Obamacare was imposed on a nation that clearly opposed it.

This short history demonstrates that neither party has a lock on Congress. The key factor appears to be the leadership that a President demonstrates and events – especially wars – that influence change. In recent decades, presidential elections have been extraordinarily close calls. The Supreme Court had to decide the winner of the Bush-Gore election.

In 1964 when Lyndon Johnson decisively defeated Barry Goldwater one might have been inclined to write off conservatism as a force in American politics, but what emerged was a group of conservatives who were determined to return the nation to its fundamental principles. Recall that from 1945 to the collapse of the Soviet Union in 1991, a very long Cold War had continued under both Democratic and Republican Presidents. It also drew the U.S. into the Vietnam War, exacerbated by Johnson and finally ended by Richard Nixon.

President Johnson was the quintessential liberal and his War on Poverty proved to be a huge failure. Begun in 1965, after forty years the percentage of people living in poverty remains essentially unchanged despite seventy-one different federal programs and benefits that will cost taxpayers an estimated $10 trillion over the next decade.

FDR's Social Security and Truman's Medicare programs are facing insolvency and drain the budget of funding for domestic and defense needs. Nearly two-thirds of the budget is dedicated to mandatory programs, significantly reducing the Federal government's discretionary spending for anything else. Obamacare only makes this situation worse with its many taxes and the nationalization of one sixth of the nation's economy.

Obamacare, however, is likely to cost the Democratic Party control of the Senate in 2014. The House is likely to remain Republican and even gain more seats. Having voted to repeal Obamacare already in the House, it would be repealed by a Republican Senate and likely require an override of any vetoes. This was the scenario for welfare reform during the Clinton years.

Just over 40% of likely voters self-identify as conservatives and those who identify as independents will surely swing in the direction of conservative policies to reduce the debt and address other issues.

The Republican Party took a drubbing in 2012, but just two years earlier, President Obama called the 2010 midterm election a "shellacking." 2014 portends to be a thorough rejection of his first term and the first two years of his second.

Liberalism has done much to undermine the American spirit. The result is too much regulation that impedes entrepreneurship and economic growth, and too much dependency on the government. This is paired with high unemployment, an anemic economic growth that is virtually unparalleled in our history. The enormous growth of national debt thanks to Obama's failed "stimulus" program is a growing concern for everyone, liberal and conservative alike.

Ironically, Obama – virtually a Communist in his outlook and efforts to "transform" America – has already produced a political backlash and, despite the liberal mainstream media, is losing his appeal to a vast cross section of voters.

All this points to a resurgence of conservatism in America and, fortunately, we have a new generation of young Republicans in Congress to lead a return to its principles. It will require political courage by voters and their elected representatives. The tax code is in desperate need of reform – nearly one half of the U.S. population, 49.5%, does not pay taxes. That is a recipe for financial disaster.

Perhaps the nation has to look such disaster in the eye before it comes to its sense. When that happens – and it will happen – conservatism will save the nation and put it on the path to its former greatness.