April 14, 2013
Obamacare – the Affordable Care Act – is both imploding from its own dead weight and conversely exploding in the face of the Democratic Party as we head toward the 2014 midterm elections. You remember the Democrats? They were the ones who, on Christmas Eve 2009 passed Obamacare in the late hours. It's the bill Nancy Pelosi told us had to be passed "so we can find out what's in it." 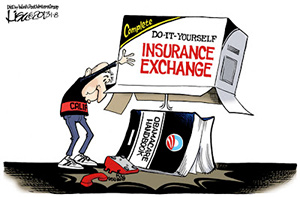 The bad news for Democrats and worse news for Barack Obama is that, since it was signed into law on March 23, 2010, Americans have had three years to learn what a total socialist time bomb Obamacare is. If you wanted to destroy the nation's economy, you could not have chosen a better way.

The crescendo of the backlash is slowly mounting. Writing in The Hill on April 6th, Sam Baker reported that "Delays in implementing popular pieces of Obamacare are hurting it with Democrats," referring to policies they believe "could help build support for the unpopular bill." Oh? It's unpopular? Who knew?

For example, wrote Baker, a key program designed to "help small businesses...won't be in place when voters head to the polls next year." It would have allowed small businesses to choose from multiple policies for their workers. Obamacare, however, is really designed to ensure that the only party from whom you can get insurance is the government.

I guarantee you that no aspect of Obamacare is going to make it more popular with any but the brain-dead Democrats who remain clueless about Obamacare.

When 33 Senate Democrats cast a non-binding vote, as they did in March, to repeal the law's tax on medical devices, you can be sure that piece of political theatre was to give them cover, particularly if they will be running for reelection in 2014. Any of the Senators who voted for Obamacare are already in serious trouble. No Republican Senators voted for it.

The National Republican Senatorial Committee noted that "People already don't like Obamacare, but they're really not going to like the tax hikes, mandates, fees, penalties, and added red tape bureaucracy that goes into effect over the next eight months. It goes from being an abstract discussion to a real life pain."

One of my favorite pundits is Peter Ferrara, a senior fellow for entitlement and budget policy at The Heartland Institute, a national non-profit free market research organization headquartered in Chicago. He served in the White House Office of Policy Development under President Reagan and as Associate Deputy Attorney General of the United States under the first President Bush. In early April, Forbes published an article of his, "Look Out Below, The Obamacare Chaos is Coming."

Ferrara summed up the dark corner in which the Democrats painted themselves, writing that "The biggest political problem faced by so-called 'liberals' and so-called 'progressives' in President Obama's second term is how to prevent voters from holding them politically responsible as the public comes to realize how badly they were lied to during the first Obama term to win passage of Obamacare."

To call Obamacare "socialist" is to do it an injustice. It is pure communism. Liberals and progressives may not be communists (some are), but they are surely the most deluded political class on planet Earth. No nation that has embraced socialism has ever enjoyed anything close to the wealth generated by the capitalism that made the U.S. an economic colossus in the last century. Now, like much of Europe, we are all deep in debt thanks to socialist programs and policies.

I have previously written about Obamacare's many pitfalls. What needs to be revisited are the many LIES that Obama told in order to get it passed. Indeed, passage required extensive arm-twisting and bribery among the Democrats who voted for it. Again, no Republicans voted for it.

Obama said, "If you like your health insurance, you can keep it. No one is going to take that away from you"; no one except the many companies who are cutting back on the number of their employees to avoid being ensnared by it. Others are simply not hiring for the same reason. Ferrara noted that "individuals as well could just skip the insurance and pay the penalty at a savings of at least 50% to 75% or more."

Since millions are likely to pursue this option, that will leave millions more uninsured and, as a bonus for idiotic policy making, it will create what Ferrara calls "a financial death spiral for private insurers." Progressives says Ferrara, will welcome this because it will leave "all health care to be paid for by the 'single payer' government." This is the same government whose Medicare and Medicaid programs are going broke. That has already been hastened by the way "almost half of Obamacare is paid for over the next decade by draining $716 billion out of Medicare."

Voters will be reminded that it is not Republicans who came up with this, but Democrats. The result according to the Medicare Office of the Actuaries is that "One out of seven hospitals will leave Medicare in the next seven years."

Simple access to medical care will become a problem as more and more physicians decide to close their private practices.

About the only good news is a lawsuit filed by the Pacific Legal Foundation that contends that Obamacare is unconstitutional because the bill originated in the Senate, not the House. Under the Origination Clause of the Constitution, all bills raising revenue must begin in the House." You'd think that Chief Justice Roberts would have known that when he cast a vote for it because he deemed Obamacare a tax. The Supreme Court needs to revisit Obamacare to redeem itself.

Obamacare is the "perfect storm" for the Democratic Party. It will swamp them in 2014.