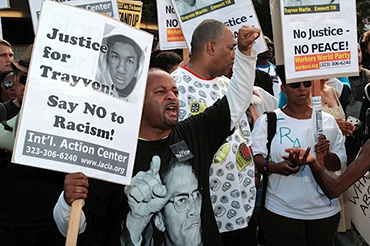 I heard it on ABC radio's Geraldo Rivera show. Commenting on the Zimmerman trial and, specifically about the lawyers representing the Martin family, a white woman said "I would never hire a black lawyer" because she felt they ignored the facts in the case following the acquittal.

Also on Tuesday, when Rush Limbaugh opened his show he dwelt at length about a CNN interview with Trayvon Martin's friend, Rachel Jeantel, and her definition of "creepy ass cracka," which she explained is spelled with an "a," not with "er." Thereafter, he devoted much of the first hour to defending Zimmerman and decrying the way the media tried to lynch him.

Over at AmericanThinker.com, Jeannie DeAngelis, after the obligatory statement that Trayvon's death was a tragedy, tore into him and other black youths, saying "Instead of blaming racism for profiling a black kid...how about placing the blame at the feet of all black youth, like Trayvon, whose behavior on other occasions causes suspicion to be focused in the general direction of perfectly innocent black teenage youth?"

It's worth noting that the gated community where George Zimmerman was a volunteer neighborhood watch participant had been subject to a number of break-ins and robberies. You don't organize a neighborhood watch if there is nothing to watch.

Then DeAngelis put the pedal to the metal citing FBI and other authoritative sources for statistics about black-on-black crime and for the high rate of abortion, 36%, among blacks despite the fact that they constitute only 13% of the total population. She wasn't too happy with the first black President of the U.S., who, she said, "sheds tears over murdered children, but it's always attached to advancing a specific political agenda."

Across the blogosphere, other white commentators were shedding political correctness to express what, in their view, reflected the largely unexpressed general views of white people in America.

A friend and fellow blogger put it this way: "Nothing much has changed since (emancipation). The only thing of substance that has changed is that now, rather than being thankful for freedom, the descendants of those freed slaves, despise white Americans for, as I believe they see it, forcing them to feel beholden to white America."

"Understand: There will never be an open and honest debate in America about black and white racism. Never. Neither side can handle the truth...neither side will face the truth and neither side wants the debate."

I disagree in one respect. Thanks to the Zimmerman trial and all the discussion that has followed in its wake, Americans are debating black and white racism.

Indeed, for many whites, the notion that blacks can be racist has come as a revelation. Whites have been conditioned to see blacks as victims of a society in which they are at a disadvantage because of their skin color. No doubt many blacks share this view, but despite the horrid statistics about blacks in America, there has been a growing middle class that has been invisible for decades, along with a cohort of professionals in medicine, law and other fields. Ironically, many have become law enforcement officers – police!

Black achievers have become visible in America and, for the race hustlers like Rev. Al Sharpton and Jesse Jackson, much of what they say now sounds increasingly hollow, self-serving and false to whites. Sharpton is busy trying to drum up more protests around the nation in the same way he inserted himself early into the Zimmerman debate, urging criminal charges be brought.

The ultimate achiever, of course, is the President of the United States, Barack Hussein Obama. Never mind that he is half white. Obama has always embraced his black half and made no excuses for it. It is worth keeping in mind that he could not have been elected and reelected without a lot of white votes, as well as those from the Hispanic community. He obviously had 98% of the black votes.

Most certainly no other President could have ever said, "If I had a son he would look like Trayvon," thus insinuating himself into the trial even before it began. In the wake of the verdict, he still could not urge peaceful protests without pushing his anti-gun agenda. Trayvon got himself killed by attacking George Zimmerman, by punching him, by pummeling his head into the concrete. That's what the jury concluded "so say all of us."

Someone should remind Attorney General Eric Holder of that. 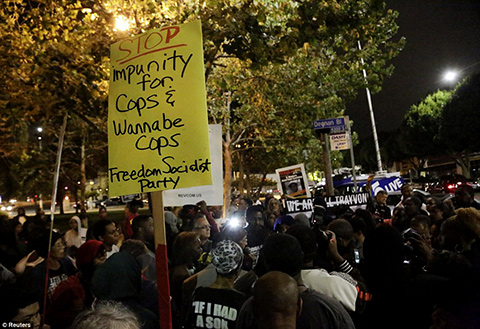 The question I do not hear anyone in the media asking or answering is "Who is organizing the protests" that we've seen in cities around the nation? Who got all those people to show up in the same place at the same time? One of the groups is the Freedom Socialist Party and another is the International Action Center that describes itself as "anti-capitalist" and "anti-imperialist." It is just one of many whose "community organizers" are quite adept at this and which, like the President, are acolytes of Saul Alinski, the Communist who dedicated his book, "Rules for Radicals," to Lucifer.

So, not only did Trayvon get himself killed, but the trial has sparked one of the most open and lively discussions of race in America that has occurred since Dr. Martin Luther King, Jr. gave his famous speech; only this time, contrary to what my fellow blogger believes, whites are saying and writing what they really think.