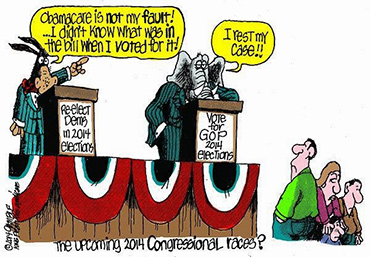 As someone who started out his career as a newspaper reporter and editor, discovering that those in public relations pitching their stories were making much more, it didn't take long for me to enter that profession. For me, the truth is always the best PR.

As the mainstream print and broadcast media's editors and reporters filled up with those graduating from the schools and universities of the 1960s and since, it became more and more obvious that reporting anything fairly and honestly about the Republican Party and its candidates was a very low priority. Many arrived at their job with a negative image firmly intact.

Take civil rights. Dr. Martin Luther King, Jr. was a Republican. It was the Republican Party that came into being largely in opposition to slavery and it was the first Republican President, Abraham Lincoln, who put in motion the freeing of slaves.

That was followed for a century by a Democratic Party that, in the South, existed to oppress blacks and deprive them of the Constitutional rights. And yet blacks are a major part of the party's coalition!

The Democratic Party is most identified with the 1930s Great Depression era in which Franklin Delano Roosevelt instituted government spending as a way out of the economic doldrums and led the creation of Social Security, followed by Medicare and Medicaid under Lyndon Johnson, but it took World War Two to break free of the Depression and the two social programs are, for all intents and purposes, insolvent and will be without some reform.

Obama has set some kind of record for refusing to negotiate with Republicans in Congress and his namesake "legacy" legislation, Obamacare, was passed in 2009 without a single Republican vote. If you have been negatively affected by it, keep in mind it is a totally Democratic Party bill with origins that reach back to Hillarycare in the 1990s and earlier.

One gets different figures regarding the membership of the two parties but one source says fifty-five million belong to the Republican Party. That is less than the seventy-two million in the Democratic Party.

A record 42% of Americans now identify themselves as independents, the highest since Gallup began measuring this over the past 25 years. Republican identification fell to 25%, the lowest ever over the time span. Democratic identification, 31%, has remained the same, unchanged from the last four years, but down from 36% in 2008. Americans are bailing out of the two-party system.

When I was growing up in the 1940s and 50s, the "image" of the Republican Party was one composed of upper class, country club and corporate members. I think that "image" remains to this day. The choice of Mitt Romney in the 2012 election reinforced it. Ironically, he lost because several million Republicans stayed home on Election Day. Why? Because serious Republicans – conservatives – did not see a party or a candidate that vigorously defended their core values and the policies they want enacted. What victories the GOP had in 2012 were as often as not the result of the infusion of new blood called Tea Party candidates.

What worries me most as 2014 begins is what passes for the leadership of the Republican Party. Neither John Boehner, nor Mitch McConnell, majority leader in the House and minority leader in the Senate, have any support. A Public Policy poll in November of Republicans gave only 15% to Boehner and 4% to McConnell.

From the point of view of a public relations counselor, I can tell you that, in addition to the bias of the mainstream media, the Democrats have waged a far more successful PR program against the Republicans for a very long time. It is the Democrats who have portrayed the Republican Party as anti-women, anti-immigrant, anti-gay, and anti-poor. These are lies, but the sheer repetition has been effective.

The GOP wants the government to spend less because, if it doesn't, the nation's financial system will collapse, but I suspect many Americans have not grasped this simple truth, particularly if they are among those receiving a government check of some kind and nearly half of the population is.

Republicans want to avoid the disaster of Lyndon Johnson's "War on Poverty" that did not end it, but did expand the welfare system. It took a Republican Congress during the Clinton years that reformed welfare, even though Clinton, of course, now takes credit for it.

In 2014 Obama will talk endlessly about "income inequality." There is no such thing in the real world. There are people who earn more because they are worth more, are more productive, provide services people want, or have taken on the risks involving investment and business development. What he never mentions is "income mobility," the ability to earn more. Obama is, in fact, crushing the middle class. Obamacare is filled with hidden taxes, higher costs, and fines.

When the GOP opposed the raising of the borrowing limit yet again, leading to the shutdown, it was widely said that it hurt their image even though it was Obama who had ended the White House tours in response to sequestration limits and, during the shutdown, ordered that veterans be kept from visiting their open air memorial in the nation's capital. Who's cold-blooded? Obama or a GOP trying to save the nation from dangerous levels of government spending and borrowing?

The Republican Party is in trouble because the nation is in trouble. We live in a nation where the annual killing of a million unborn babies is regarded as okay by a large part of the population in which the number who believe in God is decreasing. By contrast, traditional supporters of the Republican Party are southern, white, evangelical Christians.

When 2013 began, the Republican Party's "image" was at a historical low; according to the Pew Research Center for the People and the Press, 62% of the public regarded the GOP as out of touch with the American people, 56% thought it was not open to change, and 52% thought it was too "extreme." The GOP's favorable rating has not been above 50% since shortly after George W. Bush's reelection in 2004, a decade ago.

Ironically, Republicans are more critical of their party than Democrats! They do, however, credit it for its strong principles "and 80% of Republicans say their party is looking out for the country's long-term future." They're right.

If the Republican Party needs assistance to get its message out, the Democratic Party has given it a gift that will keep on giving all the way to the 2014 midterm elections in November and beyond to 2016's national elections. Nothing has demonstrated the arrogance, duplicity, and total incompetence of the Democratic Party and the Obama administration than Obamacare. The GOP must commit openly and repeatedly to repealing it.

What worries me most as 2014 begins is what passes for the leadership of the Republican Party. Neither Boehner, nor McConnell, have any support. A Public Policy poll in November of Republicans gave only 15% to Boehner and 4% to McConnell. 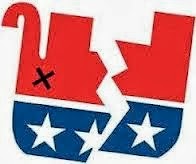 Worse still, McConnell on an Oct 30 conference call organized by Karl Rove's Crossroads organization for large donors said that the Tea Party movement, in his view, is "nothing but a bunch of bullies" that he plans to "punch in the nose." Boehner has expressed similar animosity. In effect GOP elites have declared war on the Tea Party movement. There is no PR that can justify such stupidity and arrogance.

The Republican National Party has to begin to raise the funds to craft a campaign of television commercials that will improve the party's image in 2014. Its candidates will need to talk about Obamacare until they are blue in the face.