October 27, 2014
We conservatives tend to be rather low key when it comes to expressing our commitment to conservative values. We are all about the Constitution, small government, a strong military, and fiscal prudence, but these are not things that are easy to talk about in a passionate way, no matter how strongly we feel about them. 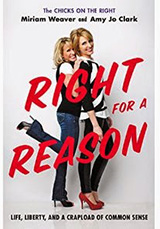 As a longtime – try fifty-plus years – book reviewer, I get lots of them and recently "Right for a Reason: Life, Liberty, and a Crapload of Common Sense" by "the Chicks on the Right," Miriam Waver and Amy Jo Clark arrived ($26.95, Penguin Group).

The "Chicks" started a website in 2009 that quickly gained a large audience of people who love their approach to conservatism and their interpretation of the events of the day, issues, and personalities. Need it be said it also attracted all manner of rude, nasty responses from liberals?

"If you're reading this right now," they say in the introduction, "chances are you're a frustrated conservative. And you've got good reason to be frustrated. If you're like us, you're practically dizzy from how often you've shaken your head at the stupidity of low-information voters who couldn't pick Nancy Pelosi out of a photo lineup, but can rattle off the names of every single member of the Kardashion clan."

"Maybe you're frustrated that conservatives haven't been able to effectively communicate their ideas in a way that resonates with the public. Maybe you're frustrated that the mainstream media has been complicit in glamorizing the liberal narrative." Well, yes, I have felt this way, but I am also aware that the Internet has provided those with the nation's political life with scads of information on many excellent websites.

Then, too, Rush Limbaugh has been a major voice on radio with a huge audience as is Sean Hannity, Michael Savage and others. By far the most popular shows devoted to the issues are conservative while liberals attract so few listeners and viewers you wonder why there are still so many liberals. One need only compare the Fox News Channel with MSNBC to know the appeal of conservatism and, yes, a conservative interpretation of the news – accurate facts!

In the lead up to the November 4 midterm elections, something remarkable is happening. There are stories noting that Obama has lost the support of a significant number of women and among black Americans. Even the mainstream press has taken note of this and it suggests that, despite our frustrations, maybe our message is having an impact. Or, maybe, these two groups, after six years of Mr. Hope and Change, have decided independently that his policies have not helped them in any way other than turn them into people dependent on the government instead of being able to support themselves and their families.

As the "Chicks" point out, "Despite what the mainstream media wants you to believe, there are thousands and thousands of people out there who are just like us." Yes! That is the answer. I recall when Ronald Reagan so encouraged and inspired them that a large segment became known as Reagan Democrats. But that was then and this is now.

"Right for a Reason" will, I believe, appeal a tad more to women readers, though men will enjoy their straight-forward analysis and the humor with which they infuse a book that is passionate about conservatism.

I think, too, that this book will appeal to younger readers, the Millennials, because it addresses the fundamental differences between liberals and conservatives. "While liberals cling like tree sloths to promise of everything being provided to them by the government, conservatives cling to the notion of self-sufficiency." And conservatives don't think you're greedy if you want to make a good living and more money than someone who is not willing to work as hard as you.

That's why conservatives were so annoyed when President Obama said, regarding anyone who is successful, "If you've got a business – you didn't build that. Somebody else made that happen." There isn't a single man or woman who has put hours into their business that did not instantly take offense, but Obama was also revealing his deeply socialistic point of view that it is the "collective" that gets things done, not individuals. Wrong! In the earliest days of the nation, roads, bridges, and canals were built to facilitate business. A huge railroad system was built both to make money and to make it easier for people to travel to the west coast to create businesses or sell to those who were already there, and vice versa.

America is all about capitalism and that explains why it became the world's superpower in the wake of World War II. In the process it saved Europe from communism and entered into 46 years of a Cold War with the then-Soviet Union. Even so, Europe has long since embraced socialism.

To a great degree, so has America with is vast plethora of "entitlement" programs that were introduced as "a safety net," but are now so integrated into the life of the nation that millions use them to avoid work because one can often receive more from the government than a job would provide! As the "Chicks" put it, "There is a time and a place for welfare. We believe in safety nets. We believe in helping people. We believe that the weakest among us and the people down on their luck should get assistance."

It's refreshing to read a book that is passionate about conservatism. We all need to be.