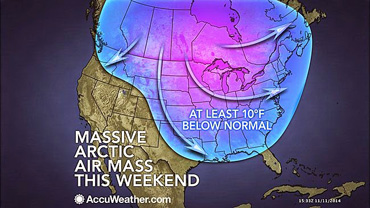 The intense cold that many Americans are encountering arrives more than a month before the official start of winter on December 2l.

To discuss this, we need to keep in mind that weather is what is occurring now. Climate is measured over longer periods, the minimum of which is thirty years and, beyond that, centuries.

We are colder these days because the Earth has been in a cooling cycle for 19 years and that cycle is based entirely on the Sun which has been radiating less heat for the same period of time.

Describing the role of the Sun, Australian geologist, Ian Plimer, said, "There is a big thermonuclear reactor in the sky that emits huge amounts of energy to the Earth...The Sun provides the energy for photosynthesis. The Sun is the bringer of life to Earth. If the Sun were more energetic the oceans would boil. If the Sun were less energetic the oceans would freeze and all life on Earth would be destroyed."

We don't control the Sun. Or the climate. It controls us. 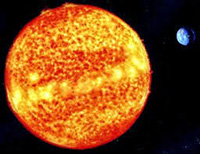 Consider the fact that the Sun has a diameter of 865,000 miles. The Earth's diameter is 7,917.5 miles. Thus, the Sun's diameter is 109 times greater than the Earth's. Carbon dioxide is barely 0.04% of the Earth's atmosphere. Reducing it as the U.S.-China agreement proposes would have zero effect on the Earth's climate.

We not only can, but should ignore the blatant lies of President Obama and Secretary of State John Kerry, both of whom have been saying things about "climate change" without a scintilla of science to back them up. They're not alone, however. In August, the U.N. Climate Chief, Christiana Figueres, warned of climate "chaos" in 500 days and told the World Health Organization that climate change was on a par with the outbreak of Ebola as a public health emergency.

It was big news on November 11 when The Wall Street Journal's lead story on its front page reported that "The U.S. and China unveiled long-term plans to curb emissions of carbon dioxide and other gases linked to climate change, a surprise move aimed at kick-starting a new round of international climate negotiations and blunting domestic opposition to cuts in both countries."

Someone needs to tell the Wall Street Journal there is no "climate change" that is not entirely NATURAL and unrelated to anything humans are doing.

The announcement plays into the longtime efforts of the environmental movement to impose energy limits on the world's population. Similar limits will be called for when climate talks are launched in December by the United Nations Intergovernmental Panel on Climate Change in Lima, Peru.

Why the leaders of nations keep calling for limits that can only result in the reduction of energy production, the loss of economic benefits from industrial activity and the jobs it provides, and the modern lifestyle of advanced nations is one of life's great mysteries.

If you really disliked America, you would no doubt pursue President Obama's anti-energy agenda. That agenda is expressed by a series of climate and pollution measures that an article in Politico.com says "rivals any presidential environmental actions of the past quarter-century – a reality check for Republicans who think last week's election gave them a mandate to end what they call the White House's 'War on Coal.'"

The authors of the Politico.com article, Andrew Restuccia and Erica Martinson, note that Obama's assault on the nation is "Tied to court-ordered deadlines, legal mandates and international climate talks" over the next two months, all in the name of a climate change "And incoming Senate Majority Leader Mitch McConnell will have few options for stopping the onslaught, though Republicans may be able to slow pieces of it."

"The coming rollout includes a Dec. 1 proposal by EPA to tighten limits on smog-causing ozone, which business groups say could be the costliest federal regulation of all time; a final rule Dec. 19 for clamping down on disposal of power plants' toxic coal cash; the Jan. 1 start date for a long-debated rule prohibiting states from polluting the air of their downwind neighbors; and a Jan. 8 deadline for issuing a final rule restricting greenhouse gas emissions from future power plants. That last rule is a centerpiece of Obama's most ambitious environmental effort, the big plan for combating climate change that he announced at Georgetown University in June 2013."

This vile assault flies in the face of actual climate trends: record low tornadoes record low hurricanes, record gain in Arctic ice, record amount of Antarctic ice, no change in the rate of sea level rise, no evidence of a Greenland meltdown, and again no warming for 19 years.

As this and future winters turn colder, arrive sooner and stay around longer, Americans will be affected by the reduction of coal-fired plants that generate electrical power. The nation will encounter blizzards that will leave some homeowners and apartment dwellers without heat. It is predictable that some will die.

A cruel and costly climate hoax is being perpetrated by President Obama and, in particular, by the Environmental Protection Agency. The new Congress must take whatever action it can to reverse and stop the harm that it represents; people's jobs and lives depend on it.