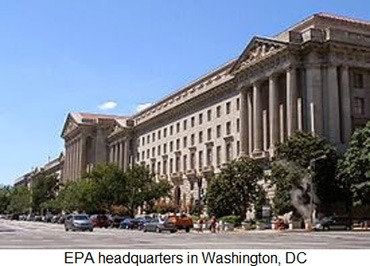 When the Republican Party takes over majority control of Congress in January, it will face a number of battles that must be fought with the Obama administration ranging from its amnesty intentions to the repeal of ObamaCare, but high among the battles is the need to rein in the metastasizing power of the Environmental Protection Agency.

In many ways, it is the most essential battle because it involves the provision of sufficient electrical energy to the nation to keep its lights on. EPA "interpretations" of the Clean Air and Clean Water Acts have become an outrageous usurpation of power that the Constitution says belongs exclusively to the Congress.

As a policy advisor to The Heartland Institute, a free market think tank, I recall how in 2012 its president, Joe Bast, submitted 16,000 signed petitions to Congress calling on it to "rein in the EPA." At the time he noted that "Today's EPA spends billions of dollars (approximately $9 billion in 2012) imposing senseless regulations. Compliance with its unnecessary rules costs hundreds of billions of dollars more."

Heartland's Science Director, Dr. Jay Lehr, said "EPA's budget could safely be cut by 80 percent or more without endangering the environment or human health. Most of what EPA does today could be done better by state government agencies, many of which didn't exist or had much less expertise back in 1970 when EPA was created."

The EPA has declared virtually everything a pollutant including the carbon dioxide (CO2) that 320 million Americans exhale with every breath. It has pursued President Obama's "war on coal" for six years with a disastrous effect on coal miners, those who work for coal-fired plants that produce electricity, and on consumers who are seeing their energy bills soar. 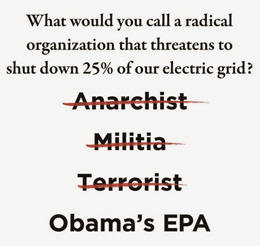 As Edwin D. Hill, the president of the International Brotherhood of Electrical Workers, noted in August, "The EPA's plan, according to its own estimates, will require closing coal-fired plants over the next five years that generate between 41 and 49 gigawatts (49,000 megawatts) of electricity" and its plan would "result in the loss of some 52,000 permanent direct jobs in utilities, mining and rail, and at least another 100,000 jobs in related industries. High skill, middle-class jobs would be lost, falling heavily in rural communities that have few comparable employment opportunities."

"The United States cannot lose more than 100 gigawatts of power in five years without severely compromising the reliability and safety of the electrical grid," warned Hill.

In October the Institute for Energy Research criticized the EPA's war on coal based on its Mercury and Air Toxics Rule and its Cross State Air Pollution Rule, noting that 72.7 gigawatts of electrical generating capacity have already, or are scheduled to retire. "That's enough to reliably power 44.7 million homes, or every home in every state west of the Mississippi river, excluding Texas." How widespread are the closures? There are now 37 states with projected power plant closures, up from 30 in 2011. The five hardest hit states are Ohio, Pennsylvania, Indiana, Kentucky, and Georgia.

If a foreign nation had attacked the U.S. in this fashion, we would be at war with it.

The EPA is engaged in a full-scale war on the U.S. economy as it ruthlessly forces coal-fired plants out of operation. This form of electricity production has been around since the industry began to serve the public in 1882 when Edison installed the world's first generating plants on Pearl Street in New York City's financial district. Moreover, the U.S. has huge reserves of coal making it an extremely affordable source of energy, available for centuries to come.

The EPA's actions have been criticized by one of the nation's leading liberal attorneys, Harvard law professor Laurence Tribe, who has joined with Peabody Energy, the world's largest private coal company, to criticize the "executive overreach" of the EPA's proposed rule to regulate carbon emissions from existing power plants. He accused the agency of abusing statutory law, violating the Constitution's Article I, Article II, the separations of powers, the Tenth and Fifth Amendments, and the agency's general contempt for the law.

It is this contempt that can be found in virtually all of its efforts to exert power over every aspect of life in America from the air we breathe, the water we use, property rights, all forms of manufacturing, and, in general, everything that contributes to the economic security and strength of the nation.

That contempt is also revealed in the way the EPA spends its taxpayer funding. Senator Jeff Flake (R-AZ) released a report, "The Science of Splurging," on December 2 in which he pointed to the $1,100,000 spent to pay the salaries of eight employees who were not working due to being placed on administrative leave, the $3,500,000 spent to fund "Planning for Economic and Fiscal Health" workshops around the nation, $1,500,000 annually to store out-of-date and unwanted publicans at an Ohio warehouse, and $700,000 to attempt to reduce methane emitted from pig flatulence in Thailand! "After years of handing out blank checks in the form of omnibus appropriations bills and continuing resolutions," said Sen. Flake, "it's time for Congress to return to regular order and restore accountability at the EPA."

Whether it is its alleged protection of the air or water, the only limits that have been placed on the EPA have been by the courts. Time and again the EPA has been admonished for over-stating or deliberately falsifying its justification to control every aspect of life in the nation, often in league with the Army Corps of Engineers.

If the Republican controlled Congress does not launch legislative action to control the EPA the consequences for Americans will continue to mount, putting them at risk of losing electricity, being deprived of implicit property rights, and driving up the cost of transportation by demanding auto manufacturers increase miles-per-gallon requirements at a time when there is now a worldwide glut of oil and the price of gasoline is dropping.

The United States has plenty of enemies in the world that want it to fail. It is insane that we harbor one as a federal agency.