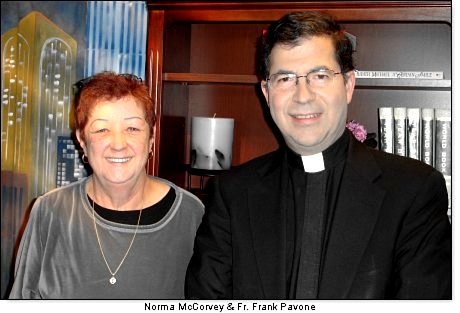 The documentary AKA Jane Roe was supposed to be a portrait of Norma McCorvey, the plaintiff in the Roe v. Wade decision that legalized abortion nationwide. But it was not about Norma. The producers had an agenda, and that was to discredit the pro-life movement and our mission to save babies and protect women. Norma McCorvey was exploited toward those ends.

The documentary shows pro-life activists being dragged away from clinics. Some of those film clips had to be 30 years old and more, depicting pro-life activists as violent criminals who bomb clinics. The majority of pro-life demonstrations are peaceful. However, pro-abortion violence is a problem that is escalating and happens frequently. A Kentucky pro-life woman was pushed to the ground and injured requiring hospitalization, and violent assaults against peaceful pro-lifers happen in Canada. Last week a pro-life sidewalk counselor was assaulted outside a New Mexico abortion facility. These incidents are ignored.

Nick Sweeney is a young ambitious filmmaker and his film production team has ties to Planned Parenthood. He never knew McCorvey intimately and saw an opportunity to interview her when she was in poor health.

One person who did know Norma intimately for decades is Father Frank Pavone, National Director of Priests for Life. Since her conversion, Father Frank has communicated with and corresponded with Norma ever since. Father Frank shared texts with Steven Ertelt of LifeNews.com the day before she did the filming, of AKA Jane Roe, describing her as being in a very bad state of mind. Norma texted that she received money for the interview. Nursing home expenses are exorbitant and Norma was struggling financially. The producers of AKA Jane Roe may have cut her a large check to cover her expenses.

I never met Norma McCorvey. Back in the mid-2000s, she sent me a brief e-mail to let me know she enjoyed reading my articles and liked my pro-life website. She never once mentioned her books, or promoted anything. Why would Norma McCorvey bother taking the time to contact pro-lifers if she still supported abortion?

Norma was deceived by her ruthless attorneys in 1973 and tragically became the symbol for abortion, experiencing what it was like to have two identities, and be two people. She was for a time Jane Roe, a symbol of the abortion movement. She became the symbol and assumed that identity. Until then, she was an anonymous woman from Texas, and nobody knew who she was. The Roe identity gave her fame and national attention, making her a public figure. Years later, she rejected that symbol because she felt shame and remorse over the state of abortion in America. That was evident in the poem she wrote, Empty Playgrounds. She went back to being Norma McCorvey, and her position changed from pro-choice to pro-life. She was baptized and became a Christian.

After watching the documentary, Father Frank Pavone issued a statement refuting many of the false claims made by the films producers including their assertions that Norma was paid to convert, or that she believed abortion was right or Roe v. Wade was right, or that she received large sums of money. Father Frank wrote:

In fact, Norma was always short of money. The documentary shows the 990 for Roe No More Ministries, not for Norma McCorveys bank account. I helped Norma create and run Roe No More Ministries. Connie Gonzalez was also part of that ministry. The ministry was the interface that handled Normas speaking engagements and therefore groups would pay to that ministry for airline tickets and other travel-related expenses when they invited Norma to speak.

It is impossible to know for certain what was in Norma McCorveys heart and mind. She came from a troubled childhood with a father who deserted the family and a mother who was an alcoholic. The Roe identity may have given Norma McCorvey the attention she craved. That could be why she went public with her name and first book, I Am Roe. Becoming pro-life later provided her with peace, forgiveness from G-d and clarity with her mission and purpose to save unborn children. Norma published a second book Won by Love, in which she speaks out about her conviction for life and saving the unborn. But it is clear she had psychological problems.

Hopefully, Norma McCorvey remained true to her pro-life beliefs. But whether she did or not has nothing to do with pro-life activism. The pro-life movement is not about a symbol or one individuals opinions. It is about ending abortion. The only thing that matters is saving unborn babies lives. Abortion kills a defenseless unborn child. Killing defenseless unborn children is wrong and should not be legal. Personal beliefs dont matter. Facts do.