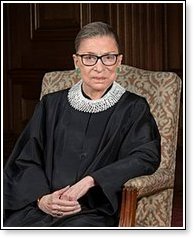 The definition of a liberal is a person who is always right about every fact he knows nothing about.
-Bonnie Chernins political diary

Now that the icon of the left and hero to feminist abortion advocates passed away, what is there to say about Justice Ruth Bader Ginsburgs life? That she never gave up or wavered on her so-called progressive ideas about abortion? Thats obvious. She ruled in favor of the barbaric partial birth abortion method. Ginsburg was a guaranteed supporter of unlimited abortion-on-demand, reflected in every decision she made on the Supreme Court.

During her tenure on the Court, Justice Ginsburg was a leftist ideologue, opposing even the most minimal and sensible limitations on abortion.

On June 29th 2020, Justice Ruth Bader Ginsburg, along with four of the Supreme Court justices including Chief Justice John Roberts, struck down Louisianas Unsafe Abortion Protection Act. This law would have required abortion clinics to adhere to the same safety standards as other ambulatory medical facilities in the state. As this factsheet explains, the law protected women obtaining abortions by ensuring that abortionists maintain proper licensing and have hospital admitting privileges in case of emergencies. This law did not end abortion, it just made it safer and was written by women for women.

In the Stenberg v. Carhart decision on June 28th, 2000, Justice Ginsburg ruled to uphold the ghastly partial birth abortion procedure, clinically labeled intact D & X abortion to sanitize the gruesome reality of the act. In this abortion, a fully-formed babys body is delivered except for its head, and then the abortionist uses scissors to suction out the babys brain.

Partial birth abortion was promoted by the abortion lobby as a medically necessary procedure to preserve the health of the pregnant woman. But here is how Doe v. Bolton, the companion decision to Roe v. Wade, defines health:

What is insidious about the Doe decision is that it gives attending physicians  abortionists  the right to decide whether and when an abortion should take place. Many states do not have reporting requirements. Nor are late term abortions performed to protect the life or health of the mother. Live Actions Inhuman Project delves deeply into this disturbing part of the abortion industry, and Dr. Anthony Levatino describes the horrors of late term abortions in graphic detail in this video.

The real reason partial birth abortion was performed is because collapsing the babys skull makes it easier for the abortionist to kill a large infant and extract its body from the pregnant woman.

It is important to note that LeRoy Carhart, the defendant in both partial birth abortion cases, continued performing 2nd and 3rd trimester abortions. In 2005, Carhart killed 19-year-old Christin Gilbert in a botched abortion. In 2013, Carhart killed 29-year-old Jennifer Morbelli in an abortion performed when she was 33 weeks pregnant. Carhart is nearly 80, and continues to commit abortions despite having hospitalized numerous women. If this were anything other than abortion a doctor would lose his medical license.

In 2003 President Bush signed the Partial Birth Abortion Ban Act which was upheld as constitutional in the 2007 Gonzales v. Carhart Supreme Court ruling. Justice Ginsburg dissented from this decision.

In 2016, Justice Ginsburg sided with the abortion industry in the Whole Womans Health v. Hellerstedt decision that struck down Texas laws that made abortion clinics safer for women.

In 2014, the Supreme Court ruled in favor of Hobby Lobby, a national chain of crafts stores. The owners consider contraception immoral and objected to paying for contraceptive employee health coverage on the grounds that it violated their religious beliefs. The High Court majority struck down the contraceptive mandate. In a similar case earlier this year, the Supreme Court ruled 7-2 in favor of the Little Sisters of the Poor, exempting the nuns from an Obama-era mandate requiring them to provide contraceptive coverage in their employee health care plans. In both cases, Justice Ruth Bader Ginsburg dissented and she wrote the dissent in the case involving the Little Sisters.

There is a lot of blame to go around for the continuing tragedy of abortion in America. The Republican Senate Judiciary Committee never should have allowed Ruth Bader Ginsburgs nomination to the High Court to proceed in the first place. She was a known leftist and should have been Borked. The Republican senators were aware of her record as an ACLU attorney. With that background, they knew what Ginsburgs views on abortion and other social issues would be. Nevertheless, on August 3rd 1993 when they had the opportunity to oppose her nomination, the Republican senators voted to confirm her to the U.S. Supreme Court, 97-3. Only three Republicans voted Nay to her confirmation.

Compare that to the nomination of Justice Brett Kavanaugh in 2018. There were 49 Democrat Senators and they were in the minority. On October 6th 2018, only one Democrat voted to confirm Justice Kavanaugh to the Supreme Court. That was Sen. Joe Manchin (D-WV). At that time, Joe Manchin was the incumbent senator up for re-election. One wonders how he would have voted if an election were not imminent. All 48 Democrats voted NAY to confirm Justice Kavanaugh based on flimsy sexual assault allegations and testimony by an emotionally disturbed woman.

Over the years the GOP establishment has snubbed conservative pro-life Republicans. Its one of the reasons President Trump received such a large percentage of the evangelical vote in 2016. Its the main reason pro-life conservatives are strongly supporting President Trump for re-election in 2020. Knowing there is a vacancy on the Supreme Court may motivate the religious Republican base to get out to the polls and vote. Lets hope so!

We need more judges that are pro-life and are constitutional originalists. The rumor is that President Trump is choosing a woman from his list of potential nominees. Judge Amy Coney Barrett has outstanding credentials and would be a perfect choice to replace Justice Ginsburgs vacant seat. President Trump should strongly consider nominating Judge Barrett, and hopefully he does so quickly.