September 4, 2012
In the three days of "speechifying" that constituted the 2012 Republican National Convention, precious little time or rhetoric was devoted to the topic of abortion. While Messrs Romney and Ryan (along with notable speakers including Condoleezza Rice and Marco Rubio) delivered rousing speeches certain to ignite the conservative base, the American people heard little from Republicans about the death toll of the unborn in America — a staggering number which tops 50 million and continues to climb. Instead, the focus of Republicans this election cycle is on jobs, the economy, and the debt/deficit debacle. It is on these issues that the President is most vulnerable, and these issues that are most pivotal to independents whose support is so critical to Romney's chances come November. 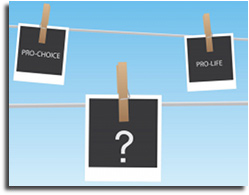 One would guess that the Obama campaign would welcome the GOP's neglect of social issues, but instead it has chosen to place abortion in the spotlight with ads berating Republicans for their stance on the issue. Indeed, the President is showcasing his support for abortion in an unprecedented way. According to an article by Baptist Press, President Obama's is virtually the only presidential campaign to explicitly advertise a pro-abortion stance since the Roe v. Wade decision was issued in 1973. The fact is, no one really likes talking about abortion, even those who are in favor of the practice. You hear plenty of vague references to the profound importance of a woman's "right to choose," but most advocates of this "choice" prefer to maintain a 30,000 foot view of the issue, where pesky moral and ethical questions are easily deflected by grandiose rhetoric designed to appeal to feminists and their sexual consorts who wish to abdicate any responsibility for the consequences of their actions.

So what gives? Is this just a diversionary tactic? A lawyer himself, President Obama is likely aware of the strategy often embraced by attorneys in advocating their cases: "When weak on the facts, pound the law. When weak on the law, pound the facts. When weak on the facts and the law, pound the table." Without much of a record to run on, it's understandable that the Obama campaign is desperate to shift the discussion away from all matters fiscal, but why pound the table about abortion? Why highlight support for a practice that kills one out of every four children conceived in America — one child every 24 seconds? Why tout the embrace of a judicial ruling that has since been discredited as a legal fabrication based not in concrete law but upon subjectively interpreted "emanations" and "penumbras"?

Well, because our President is a hard core pro-abortion ideologue who has exhibited more hostility toward the unborn than almost any other elected official in America. This is a man who voted against a law that would mandate life-saving measures for infants that survive abortion, and who famously stated that he wouldn't want his daughters "punished" with a baby if one of them "made a mistake" and became pregnant out of wedlock.

With these new ads it's clear that Mr. Obama is doubling down on the leftist rhetoric, attempting to fire up his base by appealing to issues that garner the most impassioned, emotional responses. Since he cannot defend his record on jobs and has himself previously suggested that he should not be reelected if he fails to fix the economy in his first term, his only option at this point is to distract and obfuscate as much as possible. Hence his manufactured "war on women" — a tactic based upon the assumption that subsidized birth control and the legal ability to destroy their progeny at will are the single most important issues to American women.

It is a sad state of affairs when the best thing an incumbent President has to commend to the voting public is a reckless disregard for the sanctity of human life and the embrace of a court ruling that has sanctioned the destruction of 50 million unborn children in the last 40 years. What is equally sad, however, is that the Republican Party lacks the integrity and the courage to robustly defend their pro-life platform for fear of negative political consequences.

Right now it may seem like defeating President Obama in November is all that matters, but conservatives may find that the price of that victory comes at the cost of the Grand Old Party's soul.