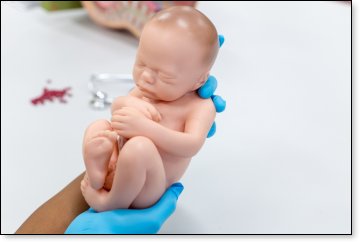 Much of America was shocked to learn about New York's passage of a law that allows for an abortion during all nine months of a woman's pregnancy, and for any reason. The law so expands abortion that even a child born alive in a botched procedure isn't protected. The new law says health care practitioners who are not physicians may also terminate the child within the womb. It removes abortion from New York's state criminal code, meaning if a baby in utero was to die from an assault on a woman there could be no severe prosecution. Furthermore, the New York law allows young girls of every age to have an abortion without parental consent.

The passage of the abortion bill was met with cheers and thunderous applause in the Gallery of the State Senate. After signing the legislation in the Capital's Red Room, Governor Cuomo ordered the state's One World Trade Center's spire, the Gov. Mario M. Cuomo Bridge, the Kosciuszko Bridge, and the Alfred E. Smith Building to be lit up in celebratory pink.

If ever the country was seemingly and largely immunized from the unspeakable evil of child-killing, what happened recently in New York should be the antidote. Wickedness is always progressive, and Americans are moving from the so-called objective of making abortions "safe, legal and rare" to merriment over infanticide.

What adds to these alarming circumstances is that "before New York's legislature voted to remove gestational limits on abortion, seven states and Washington, D.C., already had laws allowing third-trimester abortions," reports the Christian Post. Those states, say the CP, are Alaska, Colorado, New Hampshire, New Jersey, New Mexico, New York, Oregon, and Vermont, and the nation's capital. What is more, every state that has laws banning late-term abortions still allow it under certain circumstances, one of which can include "mental health" – a loophole in abortion rights law large enough through which a locomotive could pass.

Just recently a Virginia delegate, Kathy Tran (D), pushed for the passage of her bill, which failed, but would have allowed abortion at every stage of pregnancy including during labor. Rhode Island's Gov. Gina Raimondo (D) has been pushing for legislation that allows abortions until live birth and also tramples parental rights by allowing minors to have an abortion without parental consent.

North Carolinians needn't rest easy either. In 2017, companion legislation introduced by Democrats in the state House and Senate was very similar to New York's new abortion law. Neither piece of legislation, S. B. 588 – Whole Woman's Health Act and H.B. 563 by the same title, was acted upon by the House or Senate, and it's a good thing they weren't. The legislation would have legalized late-term abortions, repealed the state's "Woman's Right to Know" law, legalized sex-selection abortions, allowed physician assistant abortions, allowed post 20 week abortions to be performed in clinics, eviscerated statistical reporting of abortions, expanded the type of physicians who could perform abortions to any physician and not simply an OB/GYN or those with experience.

Certainly, if the Democrats had been in the majority and not the Republicans, the legislation would have succeeded, and our current Governor, Roy Cooper (D), would have gleefully signed it into law. That's not being politically partisan; it's just the reality of the matter.

"The traditional Western ethic has always placed great emphasis on the intrinsic worth and equal value of every human life regardless of its stage or condition. This ethic had the blessing of the Judeo-Christian heritage and has been the basis for most of our laws and much of our social policy.... This traditional ethic is still clearly dominant, but there is much to suggest that it is being eroded at its core and may eventually even be abandoned...."

We are now at that point in our national history where the core erosion is giving way to abandonment.

If this barbarism ever ends, it will be because those who love Christ and know the Word of God have fearlessly proclaimed the truth and shown the way. The media certainly won't do it. The news media was once good for telling the whole story, but not anymore.

In yesteryear, the newsreels displayed in their reports the emaciated dead bodies of Jews piled like cordwood that had been killed by the Nazis. During the Jim Crow era, the media presented pictures of blacks lynched from trees with White Supremacists standing around like it was a community picnic. When the Vietnam War was going on, major news outlets brought the horrific images of that conflict into our living rooms. American troops were bared as they were: bloody, burned, shot and blown to pieces.

These days, however, we never see the news showing what happens to an infant during an actual abortion, especially a late-term abortion. We can't hear the silent scream. We don't see the doctor plunge the poisonous needle into the little one's beating heart. We never see the legs, arms, torsos, and other body parts of unborn children oozing from a bloody birth canal or cast into the trash after the abortionist's knife has done its ghastly work. Neither do we witness the infant from a spoiled abortion left underneath a pile of towels, neglected on a cold clinic table, or twisting like a live piece of refuse in a bedpan.

All of these grisly things remain hidden and kept in secret. It would seem if the state of New York had done something so stupendous as to light up a city with festive lights, then the news media ought to let the public see what's actually being celebrated. But do you think that will happen? No, because if they did, the practice of abortion might be abandoned in a New York minute.

Christians need to see that it can no longer be business as usual. This is not to subtly suggest violence, or some other unlawful means, must be employed to halt the blitz on life's sanctity. God forbid! Nevertheless, it is to suggest Christians lovingly sharing the Gospel of Christ with people in the abortion field, educating others from a pro-life perspective, contributing generously to the pro-life cause, and supporting politicians and legislation which will protect and preserve life. Most importantly, Christians need to stop being hypocritical and having abortions themselves.

It is also to suggest that if Christ's emissaries and other pro-lifers cannot demonstrate a passion equal to or superior to that of abortion proponents, the killing will continue. It will grow until next it is the aged, the weak, the sick, the political reject, etc. If they can find a justification for celebrating the destruction of an innocent and defenseless gestational nine-month-old baby, they can find the same for killing you!