Rev. Mark H. Creech
'War, what is it good for? Absolutely nothing.' Really?
Reflections for Memorial Day 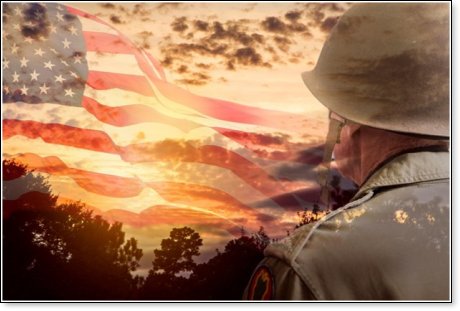 On my commute home after a long day, the 1970s hit song "War" by Edwin Starr came over my Serius radio station. I can remember passionately singing its lyrics, "War, what is good for? Absolutely nothing," at age 11 when it was at the top of the Billboard charts. And there I was alone in my car fifty years later, once again, singing those same words, when suddenly I paused mid-lyrics, realizing I didn't believe that anymore.

Not all war is wrong. Granted, war always tends to produce greater evils than those which precipitated its cause. But to argue all war is wrong – to say that there is absolutely nothing good about it – just isn't true.

Neither the pacifist's position on war nor the militarist's view is actually right. The truth lies between the two extremes.

"My first wish is to see the whole world in peace, and the inhabitants of it as one band of brothers, striving who should contribute most to the happiness of mankind. For the sake of humanity, it is devoutly to be wished that the manly employments of agriculture and the humanizing benefits of commerce should suspend the wastes of war and the rage of conquest and that the sword may be turned into the plow-share."

"If the people of Europe had not resisted the Mohammedan invasions, Europe would have been conquered and, humanly speaking, Christianity would have been stamped out. If at the time of the Reformation the Protestants had not resisted the Roman Catholic persecutions, crimes such as were practiced so freely in the Spanish and Italian Inquisitions would have become common all over Europe, and Protestantism would have been destroyed. If the American colonists had not fought for their rights, this country would not have gained its independence...We desire peace, but we realize there are some things worse than war. We desire peace, but not the kind found in the slave camp or the cemetery."

Over and again in the Old Testament, God directly commands the Israelites to go to war against their enemies. After they were delivered from Egypt, Moses and the people sang, "Jehovah is a man of war: Jehovah is his name. Pharaoh's chariots and his host hath he cast into the sea" (Exod. 15:3,4). After wandering in the wilderness for 40 years, the Israelites entered the Promised Land, and God told them to drive out its wicked inhabitants. Joshua received direct instructions from God as to how to fight the battle of Jericho. Many of the Psalms are prayers for guidance and victory during war-time. The nations that Israel often fought were so vile and sinful that God authorized war against them to wipe them out. And when the Israelites became like the pagan nations and were abominable in their own behaviors, God raised armies to make war against them. There is no question that the Scriptures teach that war, in the Providence of the Almighty, is sometimes sanctioned and divinely appointed.

It may sound remarkably striking, but the truth is war can serve wholesome objectives.

Of course, someone will quickly take exception to this assertion and claim the New Testament has a different message. The teachings of Christ always forbid war, they'll say. Such arguments can seem quite persuasive, when based on some poignant sentiment, or when Scripture is selectively employed, and the larger context of the Bible's teachings as a whole on the subject is avoided.

The New Testament doesn't provide any direct teaching on war. Jesus does command his followers to render to Caesar what is Caesar's. The apostle Paul teaches in the book of Romans that Christians must recognize the authority of civil government and perform their duties to their country. It is also true that Christians are living in a different dispensation than the people of God in Old Testament times. Still, as Boettner contends, "When rightly understood the two Testaments are supplementary, not contradictory. The silence of the New Testament on the subject of war apparently rests on the assumption that the subject had been adequately treated and did not call for any addition or modification."

I believe the wars America has fought through the years were just and right. I think Colin Powell, the U.S. Secretary of State who served under President George W. Bush, summed it up quite eloquently when he said:

"Over the years, the United States has sent many of its fine young men and women into great peril to fight for freedom beyond our borders. The only amount of land we have ever asked for in return is enough to bury those who did not return."

This Memorial Day Weekend, we remember those who gave their lives to secure our freedom. As Abraham Lincoln said in his incomparable Gettysburg Address "that from these honored dead we take increased devotion to the cause for which they gave the last full measure of devotion – that we here highly resolve that these dead shall not have died in vain...and that government of the people, by the people, for the people, shall not perish from the earth."

"War, what is good for? Absolutely nothing." No, that just isn't true.