"The diversity crowd doesn't really believe in diversity. In fact, what they're really aiming for is conformity of opinion." — Linda Chavez

'TIS THE SEASON FOR ATHEISTS TO BE "OFFENDED" (though we know what their real agenda is (driving religion underground and back into a closet). Our 'dead white Anglo-Saxon Founders' never wasted a second's worth of time worrying if unbelievers were made to feel "uncomfortable" (there were so few of them anyway). Now, only Muslims can pray in our schools.

Political correctness reigns while true agendas are mostly camouflaged. Same goes for the "Occupy" fringe crowd: they are the actual "one percent"! It's time for the Silent Majority to roar! In view of that, here are a few more words of friendly advice from our forefathers — Dweebs and Dwasps and a few other famous thinkers:

- "If you pick up a starving dog and make him prosperous, he will not bite you. This is the primary difference between a dog and a man." — Mark Twain

- "The best things and best people rise out of their separateness; I'm against a homogenized society because I want the cream to rise." — Robert Frost (1874-1963)

- "Those who have given themselves the most concern about the happiness of peoples have made their neighbors very miserable." — Anatole France (1844-1924)

- "The common excuse of those who bring misfortune on others is that they desired their good." — de Vaunenargues

- "The keenest sorrow is to recognize ourselves as the sole cause of all our adversities." — Sophocles (496-406 BC)

- "Rich man down and poor man up — they are still not even." — Yiddish proverb

- O Beware my lord of jealousy; It is the green-eyed monster, which doth mock the meat it feeds on." — Shakespeare

- "A show of envy is an insult to oneself." — Yevgeny Yevtushenko

- "People hate those who make them feel their own inferiority." — Chesterfield

- "What we cannot possess, we cheapen." — author unknown

- "Pride is generally censured and decried, but mainly by those who have nothing to be proud of." — Arthur Schoepenhauer (1788-1860)

- "Envy always slays itself by its own arrows." Unknown

- "Self-love is the greatest of all flatterers." — Rochefaucauld

- "Talkers are no good doers." — Shakespeare

- "The habit of common and continuous speech is a symptom of mental deficiency . . . from not knowing what is going on in other people's minds." — Walter Bagehot (1826-1877)

- "Nothing is more despicable than a professional talker who uses words as a quack uses his remedies." — Fenelon (1651-1715)

- "You can't multiply money by dividing it." — author unknown

- "The utopian schemes of leveling and a community of goods are as visionary and impracticable as those which vest all property in the Crown . . . [they] are arbitrary, despotic, and in our government, unconstitutional." — Sam Adams

- "When the mouse laughs at the cat, there's a hole nearby." — Nigerian proverb

'Tis the season for political games and political debates, none of which I have watched because the liberal moderators (an oxymoron) ask such stupid questions. I would watch a Trump debate if I could, but the bottom-line question for every candidate is this one:

"What is your highest priority, "the path you have chosen" — your political ideology and getting elected — or the goal (doing the right thing for the country)?"

PPS: Speaking of laughter, David Axelrod is going around saying "The higher the monkey climbs in the tree, the more you see his behind." To whom is he referring? If I were moderating one of the primary debates, I would ask every candidate:

"Do you personally know anyone who is a farmer, a lumberjack, or a geologist?"

The higher the monkey climbs in the tree, the more you see his chain saw, Mr. Axe. That's how I made my living. Just to prove it, here's a picture of me cutting down a redwood tree in California (it was a dead one, but I love saying that). This was in 1989 when a was a young 46 years old): 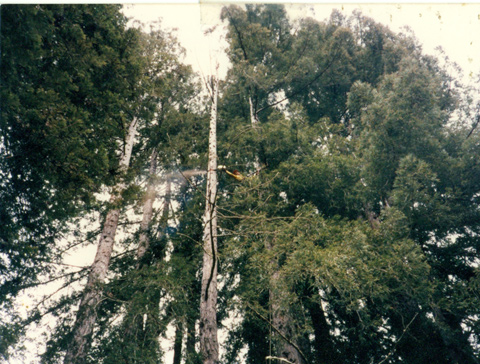